Over the weekend I finished up two of the figures from the Golems set: the Stone Golem, and the Battleguard Golem.  I did my standard prep of washing in dish soap, and then gluing to  black-primered fender washers.  Then I glued them to a tongue depressor for painting. After I studied the figures a bit in preparation of painting, I decided that I wanted them to have a black primer coat, so I did a quick one by just painting on black craft paint with a paint brush. 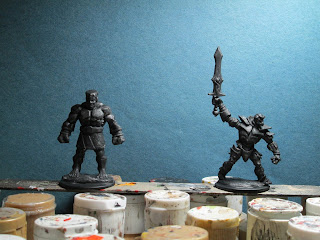 For the Stone Golem I decided I didn't want to go the easy route and just drybrush the whole thing grey. So, I decided it might be interesting to do him as if made of marble, as marble is often used for statue carving. And then I thought it might be neat to add a second color of marble for his garment. So I decided on white marble for the body and green for the kilt.  I did a quick Google image search for white and green marble to set in my mind exactly how they are colored and striated .
So, I began by giving the body of the Stone Golem a heavy drybrushing with Americana "Dove Grey", only leaving a the deepest fissures in the original black.  I then did a much lighter drybrushing with white.  After the drybrusing I took my finest tipped brush and began adding thin black striations, and mottling to the white surface to give that marble look.
Afterward I repeated the process with the kilt; first with a heavy drybrush of  Americana "Forest Green", and then a lighter drybrushing with Americana leaf green.  I then added both white and some black striations as well as some dark splotches with Accent "Deep Forest Green."  My last step was to add some black dots to the eyes for pupils. 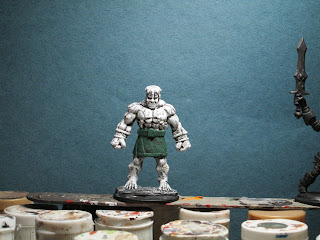 For the Battleguard Golem, I wanted to do a black and brass kind of "Steampunk" color scheme. So I began by giving he whole figure a light drybrush with Accent "Princely Pewter" just to give it a metallic sheen and add some highlights to the armor edges.  I then painted all the rivets and other small details with Ceramcoat "14K Gold" to look like polished brass. Finally, I painted the sword with Ceramcoat "Metallic Pewter" with details in the "14k Gold", and added GW "Chainmail" highlights to the blade's edges.  My last step was to paint little red dots for eyes, with tiny white specks as highlights in them to make them look either glowing or reflective.. 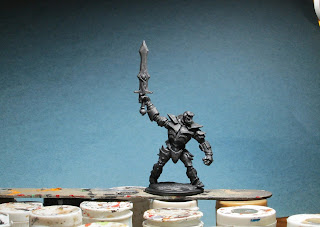 After the figures were dry, I brushed on a protective coat with Cermacoat "Matte Varnish" and then flocked the bases.  This was followed with spraying both figures with Testor's Dull Cote 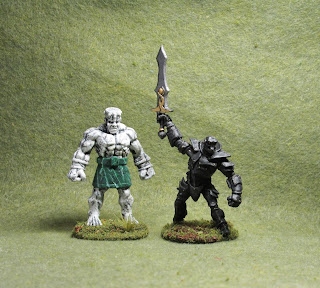 Here again, I am quite pleased with the results from quick and easy paint jobs. Both figures turned out looking as good as I cold have expected, and nether took  a whole lot of time to complete. 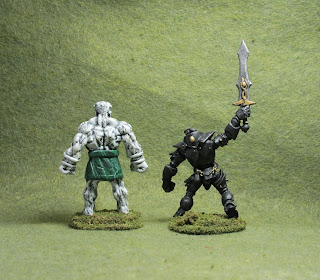