I thought I would start his blog to chronicle my efforts painting all my Bones Kickstarter figures, and that doing so would help keep me on task with my painting.  I also hope it would provide incentive for others to work on their Bones Kickstarter figures. I had big dreams that I would paint one a day, and post them here; so in a little less than a year I would have the entire set done.  And then reality set in.  To do a lot of these figures justice takes more than a one day paint job; and basing, flocking, varnishing, and matte coating are all steps that slow down the final results.  So, I have changed my goals to a more realistic one or two figures a week. 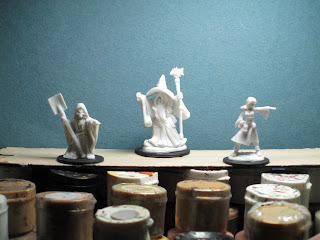 My first decision to make was what figure to paint to inaugurate my blog.  It didn't take long as I pawed through the box of figures, to settle on the Mr Bones Reaper Kickstarter mascot figure, as the most obvious choice for first candidate. I also selected the large Rock Golem from the Forces of Nature add on pair (the Not-Gorignak for you Galaxy Quests fans!), and a couple of magic users pulled randomly out of the bag in which I had put the Original 30 Bones figures, to follow up with. 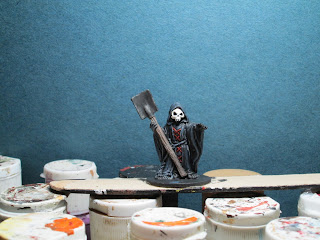 I would like to say that this was the first ever Bones figure I painted, but I had the good fortune to paint one before (a ghost) at the Reaper Paint-and-Take tables at Origins '12.  So this would be my second ever Bones figure.  I thought I would do these first few, exactly as Reaper suggests, straight out of the package with little prep. I did have to straighten out the shovel on Mr Bones as it had been bent a little in shipping.  I easily did this by holding the figure in the steam-stream from a tea kettle for a few seconds. I also had to trim down some mold line flash. 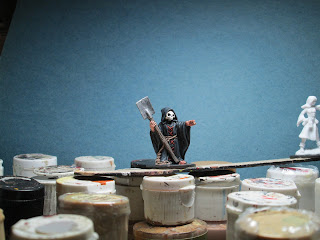 I first glued the figure to a 1" black-primed fender washer, and then glued that to a tongue depressor. For painting the Bones I plan to use my basic assortment of craft acrylic paints with a smattering of some GW paints I own. I started by painting the whole Mr Bones figure black.  I then drybrushed the cloaks with a mid-tone blue-gray.  Next I painted the shovel handle dark brown and the skull mask a pale buttermilk color. While these dried I painted the lacings on his under-robe red. Then I went back and did some tan highlights on the shovel handle's grain, and painted the mask highlight's white.
Next I did the skin, painting a dark ruddy flesh base, and then highlighting it.  The rope/noose belt followed with a brown base and tan highlights.  Finally I did the shovel blade in dark metal with silver highlights.  When dry I used brush on varnish, and then flocked the base.  A coat of Testor's Dullcote finished the job.
﻿ 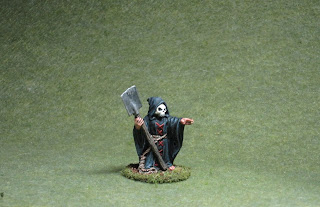 ﻿
I'm please with the results on this figure.  It was a good choice for a starter, as it is a simple rather straight forward sculpt with lots of good detail, and very quick to paint up.  Figure 1 of 264 done.
Posted by Chris Palmer 12 comments:

My Box From Reaper Arrives

When I got home Monday, there was a big box waiting on my doorstep, and sure enough, it was my Reaper Bones Kickstarer figures! I thought I'd take some photo of the opening 'ceremony', so those that haven't received their box yet, can anticipate a little better what will be arriving soon at their homes as well. 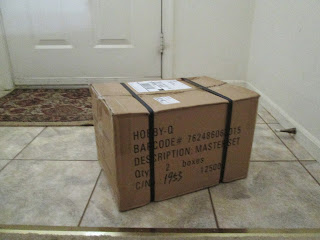 In the box, on top, are an invoice and a color flyer advertising Reaper paint and giving a brief 4 step painting guide to Bones, then are some shipping protection air pillows and all the extra figures I ordered as separate add-ons.  Then beneath this is the Vampire box itself. 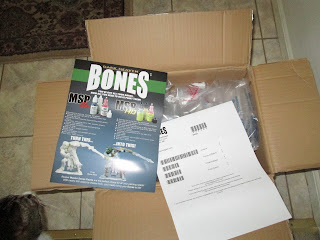 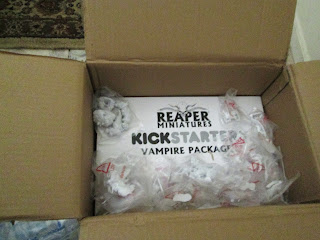 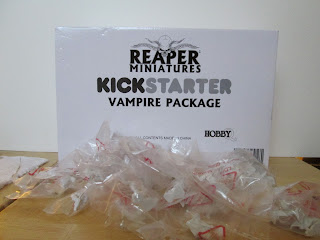 In the actual Vampire box are 6 large plastic bags, each containing dozens of the figures.  My painting queue is all set for the next decade. :-) 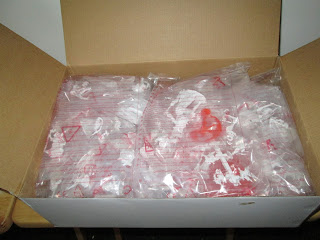