With all the Christmas stuff to get done around the house, I picked something quick and easy to paint, so chose the Iron Maiden from the Bones 3 Torture Chamber set.
I prepped the figure in the usual way; soaking it in a dish of water with a couple drops of dish-soap added, then giving it a light scrub with a soft toothbrush, and then rinsing and drying it.    I then glued the figure to a black-primed 1." fender washer with Aleene's Tacky glue, and then glued the washer-mounted figure to a tongue depressor with a couple drops of the Elmer's glue. 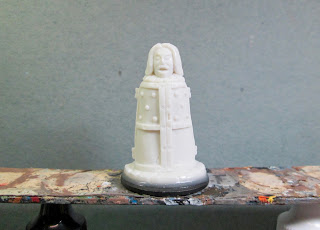 I began by painting the main body with Americana "Bittersweet Chocolate", and the head with Black 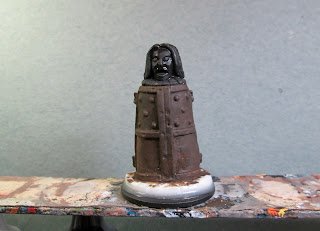 I then drybrushed the head with Ceramcoat "Bronze, and when that was dry, I gave the entire piece a wash with Citadel "Nuln Oil" wash. 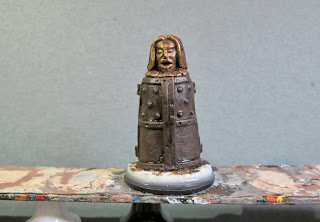 When the wash was dry, I added some rust effects to the main body with Crafter's Edition "Spice Brown", and then Accent "Golden Oxide". 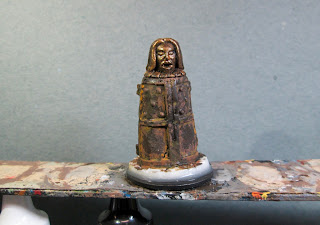 Next, when the wash was dry, I lightly drybrushed the main body with Folk Art Metallics "Gunmetal Grey".  After that I drybrushed some highlights on the head with Ceramcoat "14K Gold".   I then painted the base with Americana "Neutral Grey", and when that was dry, gave the stones on the figure's base a light wash using a wet brush with the "Nuln Oil".  When the wash was dry, I did a quick highlight on the stones with the base "Neutral Grey".
I let the figure dry overnight and the next day I gave it a coat of Americana "DuraClear Matte" varnish.    Then, another overnight dry, and I sprayed it with Testor's Dullcote". 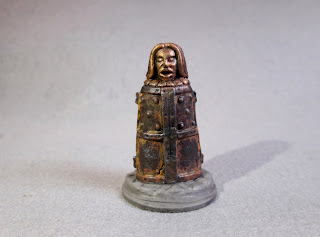 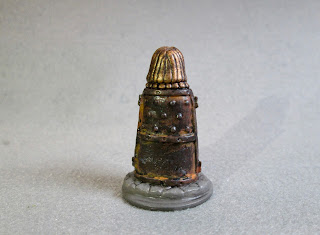 I'm pretty happy with how this turned out.    I'm particularly pleased with how the rusty metal ended up looking.

Since next Monday is Christmas I won't be posting a figure.  Please tune in again on New Year's Day, when I hope (fingers crossed!) to be able to post my first figure of 2018.
Posted by Chris Palmer 6 comments:

Just a heads up to let folks know that I did not finish a figure to post today.  The week was just too busy with Christmas activities and getting stuff ready for our big double-header final Frostgrave Christmas game, and our test Ghost Archipelago game.
Tune in again, next Monday for the next figure! 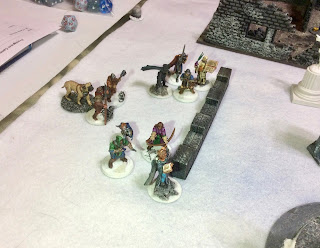 Posted by Chris Palmer No comments:

As I continue to work on my crew for Ghost Archipelago, I painted the Elthin Bluesteel, Gunslinger figure from the Bones 3 Heroes 2 set this past week.   I needed a figure to be a standard plain crewman to flesh out my regular crew, and thought this figure could pass suitably for a crewman aboard a ship.   I didn't need him to be a gunslinger however; so I did a quick modification on him, cutting away the gun in his right hand, and gluing in a spear from the Bones 3 Arsenal weapon sprue.  I will treat him as armed with a 2-handed weapon.
Also, I wanted my crew to be all Elf, and I thought that with his long hair he could pass as one, assuming his ears were hidden in the hair.
Before I made the conversion, I prepped the figure in the usual way; soaking it in a dish of water with a couple drops of dish-soap added, then giving it a light scrub with a soft toothbrush, and then rinsing and drying it.    I then added the spear with superglue, and afterwards glued the figure to a black-primed 1." fender washer with Aleene's Tacky glue, and then glued the washer-mounted figure to a tongue depressor with a couple drops of the Elmer's glue. 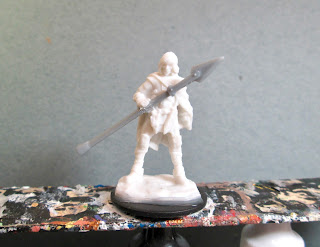 I began by giving the whole model a wash with heavily thinned Reaper MSP "Brown Liner".  I then painted his face with Crafter's Acrylic "Flesh", and his pants with Americana "Wedgewood Blue". After that, I painted his armor with Citadel "Snakebite Leather". 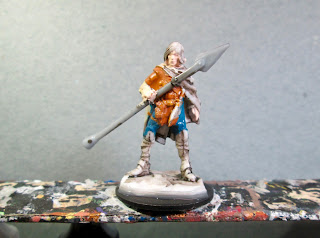 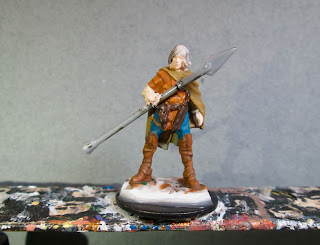 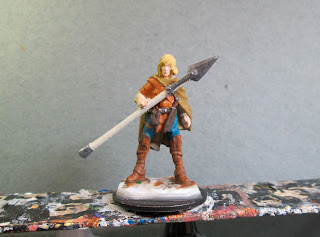 I let everything dry for a while, and then gave the whole figure a wash with Citadel "Agrax Earthshade".   When the wash was dry, I highlighted his hair with Americana "Moon Yellow", and then did lighter highlights with Apple Barrel "Lemon Chiffon".  I then painted his eyes, and afterwards highlighted his skin with a mix of the base "Flesh", and White.   After that, I highlighted the spear shaft with the base "Bleached Sand". 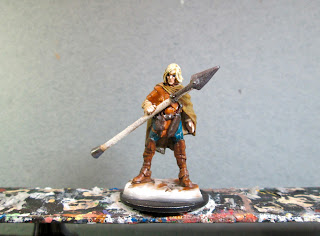 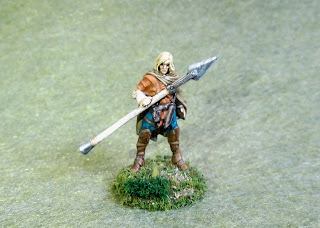 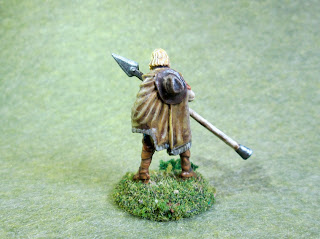 I'm generally happy with how this fellow turned out.  He's not fancy, but he gets the job done for tabletop use.
Posted by Chris Palmer 5 comments: