For a while I had been pondering what figure to use for the White Gorilla creature from the Frostgrave rules.   Then one day, while looking for something else, I spotted the Ape Demon figure from the Bones II Lesser Demons set, and I thought, "Why not?"  Maybe the White Gorillas of Frostgrave are the descendants of some bizarre experiment of a misguided wizard long ago who thought it would be a good idea to cross a bat with a gorilla. (Maybe so he could quickly run errands for him through the crowded city.  That's why he has the one big ear; (so he can hear his master call him home), and the big hands so he can carry the grocery shopping!) Over the centuries the wings have become flightless, but they still make the creature look fearsome. :)
I prepped the figure in the usual way; soaking it in a dish of water with a couple drops of dish- soap added, then giving it a light scrub with a soft toothbrush, and then rinsing and drying it.  I then glued the figure to a white-primed 1,25" fender washer with Aleene's Tacky glue, and then glued the washer-mounted figure to a tongue depressor with a couple drops of the Elmer's glue. 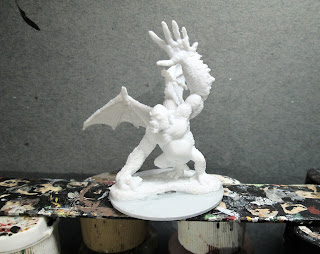 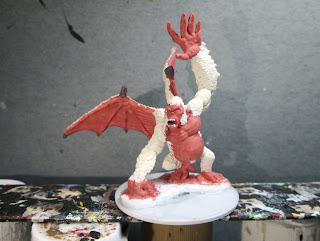 I let all the paint dry for a while and then gave the entire figure a wash with Citadel "Agrax Earthshade" wash using a wet brush". 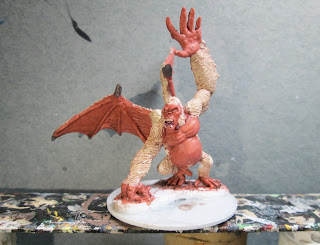 After the wash was dry, I worked on highlighting his fur, first drybrushing it with Crafter's Acrylic "Light Antique White", and then with plain White. I also used the "Light Antique White" to highlight his teeth.  Next I painted his eyes, and then highlighted his skin with the "Shading Flesh".   Then i did a quick highlight on the tip of his tongue using a mix of Apple Barrel "Apple Lavender" and the "African Violet".  I highlighted his talons with Folk Art "Rock Grey, and painted his finger nails with Folk Art "Platinum Grey".
I decided I wanted to add a little something to the large bare spot on the front of the base, so I glued on a little bit of cork rubble and a little piece of gravel, and when the glue was dry I painted it with Americana "Zinc".  I then drybrushed it with Crafter's Acrylic "Storm Cloud Grey", and then the "Platinum Grey", and lastly some plain White.    I painted the figures integral base and the rest of the fender washer base white.
When everything had overnight to dry, I gave the figure a coat of Ceramcoat "Matte Varnish" early the next morning.  Midday, I flocked the white areas with Woodland Scenics "Snow" flock and the next day I sprayed the figure with Testor's Dullcote. 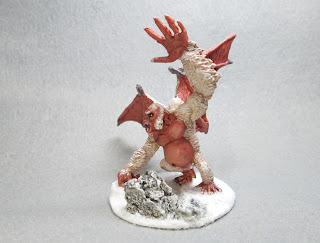 I really like how this fellow turned out.  And I think he fills the role of descendant of bizarre wizard's experiment just as well as he did as his intended use as a demon! :)
Posted by Chris Palmer