This past week I started the Swamp Things set and painted the Marsh Troll figure.
I prepped the figure in the usual way; soaking it in a dish of water with a couple drops of dish-soap added, then giving it a light scrub with a soft toothbrush, and then rinsing and drying.  I then glued the troll to a 2" black-primed fender washer with Aleene's Tacky glue.  The 2" washer was big enough to just hand hold, so I didn't glue it to a tongue depressor. 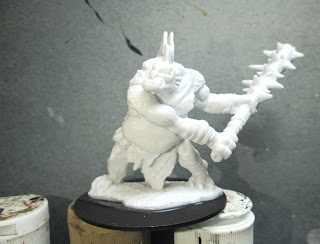 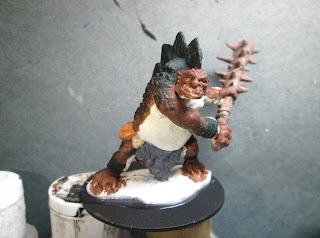 I then used the "Gray Green" again to paint the cord on the club. After that I painted his wrist wraps with Folk Art Barn Wood", and then did his teeth with Americana "Buttermilk".  I then painted his claws with Apple Barrel "Rock Grey". 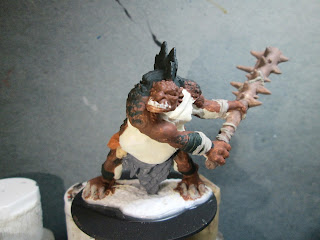 Next, I painted his front loin cloth to look like fish scales by using some  Folk Art Pearl "Aqua Moire".  I then let everything dry for a while and then gave the entire figure a wash with Citadel "Nuln Oil" wash using a wet brush.   When the wash was dry, I painted his eyes, and then highlighted his teeth with Crafter's Acrylic "Light Antique White". 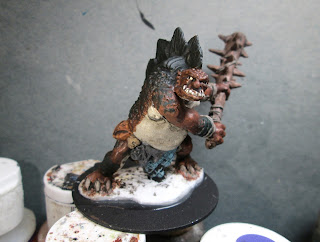 Next, I highlighted his skin with Americana "Sable Brown", and then highlighted his underbelly with the base "Bleached Sand". I then drybrushed his scales with Duncan "Olive Green".   After that, I drybrushed his fur loincloth with Americana "Khaki Tan", and then used that color to highlight the edges of the underside flap that hangs over the top.  I then moved around to the front and highlighted the overhang flap on the top of the fish scales with Crafter's Acrylic "Storm Cloud Grey".  While doing that, I noticed that there was a bag tucked into his belt at the corner of the fish scale flap, so I took a moment and pointed hit with Accent "Golden Harvest" and then highlighted it with the "Butter Pecan".  I also highlighted the other pouch with the base "Terra Cotta, and the Skull/shrunken head with the "Khaki Tan".  The wrist wraps I highlighted with the base "Barn Wood", and his claws I highlighted with the base "Rock Grey".
I then moved to the club and carefully drybrushed the tips of the thorn spikes with Black.  Then as carefully as I could I tried to drybrush the base wood of the club with some of the "Barn Wood" color.  I then highlighted the cord wrapped around the club, as well as the cord at his waist with the base "Gray Green".   I finished up by drybrushing the fish scales with Folk Art "Silver Sterling",  then I painted his integral base with Ceramcoat "Walnut".
I let the figure dry over night and the next day I gave it a coat of Ceramcoat "Matte Varnish". When dry, I flocked the base then glued on a small stick and some grass tufts. Another overnight dry, and I sprayed it with Testor's Dullcote". 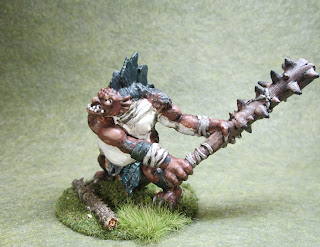 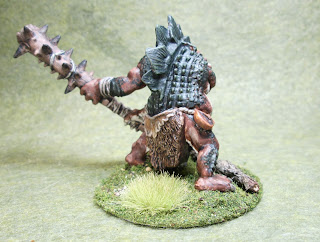 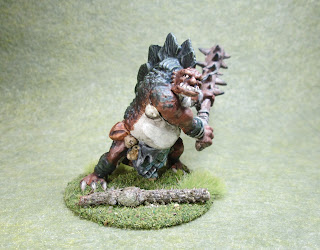 I'm happy with how this big fella came out.  He won't win any contests, as it was a busy week and I ended up cutting some corners; but for the most part I think he is a very serviceable tabletop figure.