This past week I officially began the Iconics and Officially Licensed Pathfinder Miniatures Set, and painted the Seelah, Iconic Paladin, figure.  I say, "officially began", because I had already pulled the Feiya, Iconic Witch, figure from this set to paint up as my Illusionist apprentice for Frostgrave. My plan now it to work on this set in ernest.
Also, this being the 216th figure for me to post, it marks the 50-more-figures-to-go point for me.  It's all downhill from here!
I prepped the figure in the usual way; soaking it in a dish of water with a couple drops of dish- soap added, then giving it a light scrub with a soft toothbrush, and then rinsing and drying it.  I then glued the figure to a white-primed 1" fender washer with Aleene's Tacky glue, and then glued the washer-mounted figure to a tongue depressor with a couple drops of the Elmer's glue. 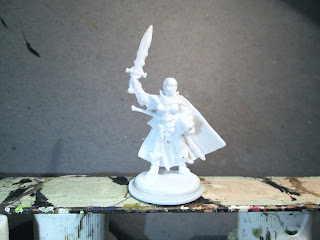 I began by painting the the armor and sword entirely in Black.  I then drybrushed it with Americana "Neutral Grey". 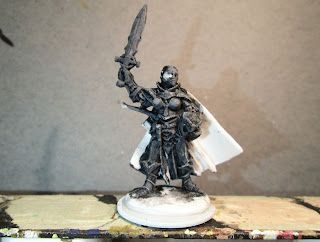 Next, I drybrushed the armor and sword with Folk Art Metallics "Gunmetal Grey".  Then I painted the outside of her cape and the drape at her waist with Crafter's Acrylic "Bright Blue".  I then did the lining of the cape, and the face of her shield with Folk Art "Platinum Grey". After that, I painted her head with Americana "Raw Umber". 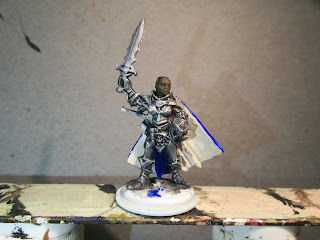 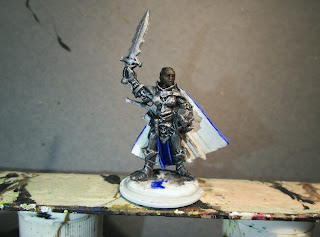 When the wash was dry, I painted her eyes, and then did highlights on her face with a mix of the "Raw Umber" and Americana "Shading Flesh".    Next, I highlighted her hair with Americana "Zinc". I then highlighted her belt, pouch and sword grip with Ceramcoat "Denim Blue".  I then painted her bow with Crafter's Acrylic "Cinnamon Brown', the quiver with Nicole's "Brown", the scabbard with Crafter's Acrylic "Navy Blue", and the one object hanging from her back I couldn't identify, with Americana "Asphaltum".
Next, I highlighted the bow with Americana "Sable Brown".  I then added trim to the quiver, and painted her hair tie with Americana "Terra Cotta".  Afterwards, I painted the arrow fletchings with the "Denim Blue", and used this color to highlight the scabbard too.  I highlighted the fletchings with the "Cool Blue". I then did a free-hand design on the shield using the "Bright Blue".
At this point, I got out the metallic"Gunmetal Grey" again, and painted the border around the shield, and the bottom tip of the scabbard.  I then used Folk Art Metallics "Silver Sterling" to add highlights to the armor, sword, and shield border.
I had originally mounted her on a white washer to use as a Templar in Frostgrave; but as soon as I started painting her, I had realized she was carrying bow and quiver and there is no bow-armed, sword-wielding, armored class in Frostgrave.  (I really like to have my figures match as close to possible to how they are supposed to be armed and armored for this game. WYSIWYG!) So, at this point I used Ceramcoat "Walnut to paint the figure's integral base, and the white washer.
After the figure had overnight to dry, I gave it a coat of Ceramcoat "Matte Varnish" the following morning.  Later that morning I flocked the base, and that evening I sprayed the figure with Testor's Dullcote.   After the Dullcote was dry, I used a little dab of superglue to affix one of the tiny nail gems to the base of the sword. 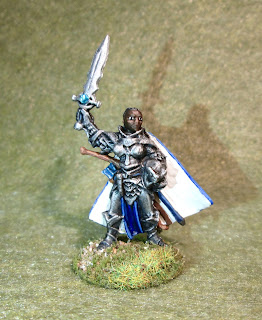 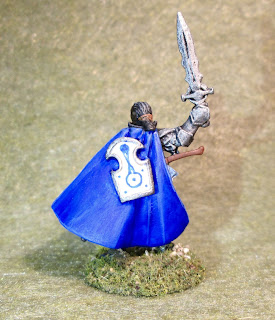 I like the way she came out, though I probably should have spent a little more time with the free-hand on the shield.   Nonetheless, it is a nice basic figure and was easy to paint.