This week I also finished up the Kobold Leaders from the Bones II, Expansion 1, Kobold Leaders set.  I referenced the Kobolds I had done back in 2014 from the Bones I Kickstarter for my color scheme.
I prepped the figures in the usual way; soaking them in a dish of water with a couple drops of dish- soap added, then giving them a light scrub with a soft toothbrush, and then rinsing and drying them. I couldn't get the mace on the Leader figure to stand straight after repeated boiling water treatments, so I finally decided to splice out the shaft and replace it with a short piece of paper clip wire.  I drilled out the Leader's hand and the mace head and used Gorilla Superglue to attach the wire.   I then glued both figures to 7/8" fender washers with Aleene's Tacky glue.  I then glued the washers to a tongue depressor with a couple drops of the Elmer's glue each. 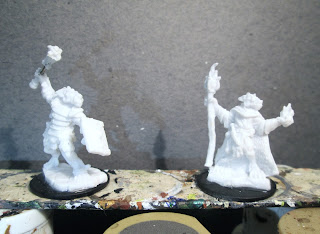 I began by painting both figures entirely Black.  I hen drybrushed the leader's armor and mace with Folk Art Metallic's "Gunmetal Grey".  Next, I painted their skin Folk Art "Barnyard Red".  I then painted the interior of the Shaman's cape with Ceramcoat "Territorial Beige". 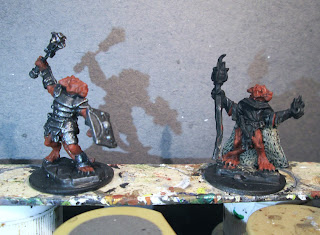 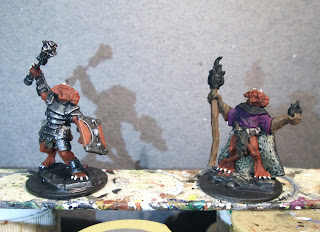 I painted the stonework bases with Folk Art "Medium Grey" and the top of the Shaman's staff with Ceramcoat "Bronze".  Then, when everything had a while to dry, I gave both figures a complete wash with GW "Badab Black" wash using a wet brush. 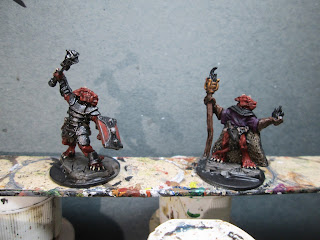 When the wash had dried, it was time to work on highlights.  I used the "Cadmium Red" to highlight the Leader's shield and paint their eyes.    Then I used the base Barnyard Red to highlight their skin, and some Black to paint their noses.  I then used Crafter's Acrylic "Storm Cloud Grey" to highlight the stonework bases, and the "Buttermilk" to paint their teeth. .  After that I highlighted the Leader's armor and mace with some Folk Art Metallics "Silver Sterling".
The Leader was now done, so I turned my attention to finishing the Shaman.  I began by highlighting his shirt with Crafter's Acrylic "Purple Passion", and the exterior of his cape with GW "Shadow Grey".  I highlighted his gloves with Americana "Sable Brown".  Next, I highlighted his staff and loin cloth with Crafter's Edition"Spice Brown".  Then I painted his dagger and buckle with the "Gunmetal Grey".  I then worked on the flames in his hand and in the brazier on top of his staff.  I decided I wanted them to be green to look more magical.  I began by painting the base of the flames with Nicole's "Neon Green".  I also use this color to add some reflective glow to his left glove and the brazier.  Next, I blended in Crafter's Acrylic "Holiday Green" into the flame, and then Americana 'Forest Green", then finished the tops of the flame with  Accent "Forest Green".
After everything had dried overnight, I gave the figures a coat of Ceramcoat "Matte Varnish" and, when dry, flocked their bases.  Another overnight dry, and I sprayed them with Testor's Dullcote". 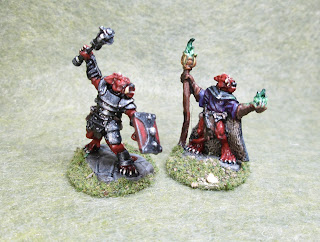 I'm happy with these two, and am particularly pleased with how the green flame turned out.  I know I will be doing the green fire again, because I think it turned out pretty nifty.  As with the Goblin Leaders I completed last week, I'm happy to finally have some command figures for my Kobold horde from the first Bones Kickstarter.
Posted by Chris Palmer

Email ThisBlogThis!Share to TwitterShare to FacebookShare to Pinterest
Labels: Kobolds