Over the weekend I finished up Damiel, Iconic Alchemist, from the Iconics and Officially Licensed Pathfinder Miniatures Set.  Only two more figures to go from this set.
I prepped the figure in the usual way; soaking it in a dish of water with a couple drops of dish-soap added, then I gave it a light scrub with a soft toothbrush, and then rinsed and dried it.  Next, I glued the figure to a black-primed 1" fender washer with Aleene's Tacky glue, and then glued the washer-mounted figure to a tongue depressor with a couple drops of the Elmer's glue. 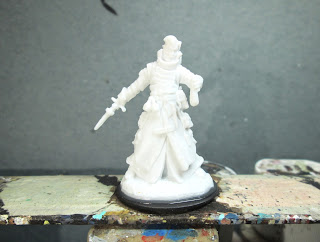 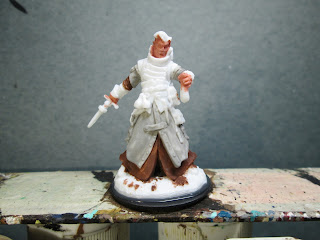 My next step was to paint his utility vest with Ceramcoat "Territorial Beige", and then the corset-like piece he wears with Citadel Snakebite Leather".  I also used this color to paint his wrist guards.  Then I painted the riveted straps down his front with Accent "Golden Harvest". 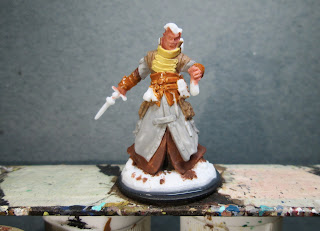 I then worked on some of his accessory pieces.  I used the "Bittersweet Chocolate" to paint his backpack, and then painted the keg with Nicole's "Brown".  The book hanging at his side I painted with Apple Barrel "Burnt Sienna" for the Cover, and Americana "Bleached Sand" for the pages. I painted his hair with Apple Barrel "Apple Maple Syrup", and some of the flasks hanging off him with Folk Art "Platinum Grey".  I noticed his shoes, and painted those with Accent "Real Umber". 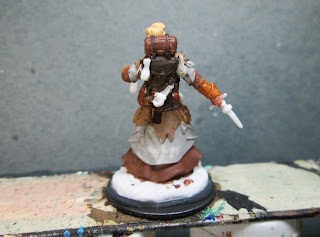 I let everything dry for a while, and then gave the figure a wash with GW "Agrax Earthshade" wash using a wet brush.  When the wash was dry, I worked on highlighting his hair, first with Americana "Moon Yellow, and then With Americana "Buttermilk".  Next, I painted his eyes, and worked on highlighting his skin with a mix of the "Shading Flesh", and Crafters Acrylic "Flesh". 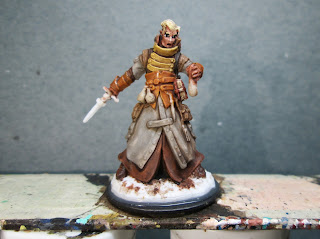 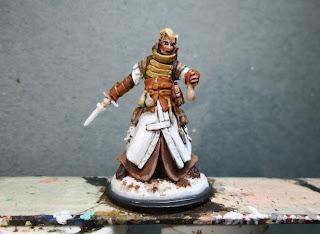 Next, I highlighted the corset-like piece he wears as well as the forearm guards with Accent "Golden Oxide".  I then worked around the back  a bit; highlighting the backpack with Folk Art "Dark Brown", and the cask with the "Sable Brown".  I highlighted his shoes with Americana "Mississippi Mud", and then used the color to paint the dagger scabbard hanging at this front.  I used some of the "Bittersweet Chocolate" to paint the dagger's handle.   I then painted the unpainted flasks, and the test-tubes along his sides, with Crafter's Acrylic "Cool Blue".  I did highlights on the flasks I had painted earlier with the "Platinum Grey" with the "Dove Grey", and the ones I had just painted with the "Cool Blue", I highlighted with White.  I then painted some liquid in the flask he's holding, with Nicole's "Neon Green".  When it was dry, I gave it a wash with Iron Wind Metals "Dark Green" ink.  I then reapplied a White highlight.
I now worked on the metallics.  I painted the dagger in his hand,  some of the buckles on his backpack, and the fasteners on his lab coat,  with Folk Art Metallic's "Gunmetal Grey".  I then painted the protective armor running up his chest and chin with Ceramcoat "Bronze".  I also used this color to paint the clasp and fittings on the book at his side, the buckle on the corset belt, and the fittings on the dagger he holds.  I then went back and added a highlight to the dagger blade with Folk Art Metallics  "Silver Sterling".  I highlighted all the parks I had painted with the "Bronze", using Ceramcaot "14K Gold".
I finished up by painting the figure's white base with Cermacoat "Walnut".
After the figure had overnight to dry, I gave it a coat of Ceramcoat "Matte Varnish".   When the varnish was dry, I flocked the base, and that evening I sprayed the figure with Testor's Dullcote. 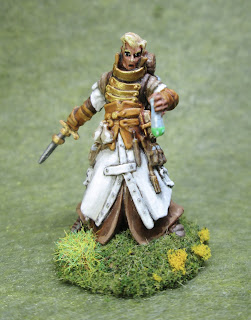 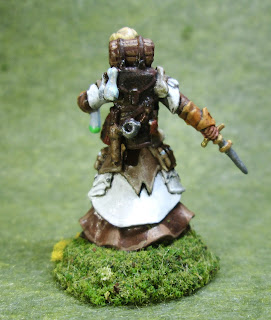 I like the way this fellow turned out.  I think the white "lab-coat" look works well on him.