This week, I finally got around to completing the last three of the Kobolds from the Dungeon Attack set; which have been hanging around the painting table collecting dust for a while now. With the completion of these, I have put the Dungeon Attack set to bed now, and it can go on the Completed Set list over on the right.
When I prepared these long ago, I had soaked them in some water with a little dish soap added, and then gave them a light scrub with a soft toothbrush and then rinsed them.  When dry, I had sprayed them with Krylon Flat Black Camouflage with Fusion spray paint, and when that was dry, I had glued them to black-primed 7/8" fender washers with Aleene's Tacky glue. I then glued the washers to a tongue depressor with a couple drops of Elmer's white glue. 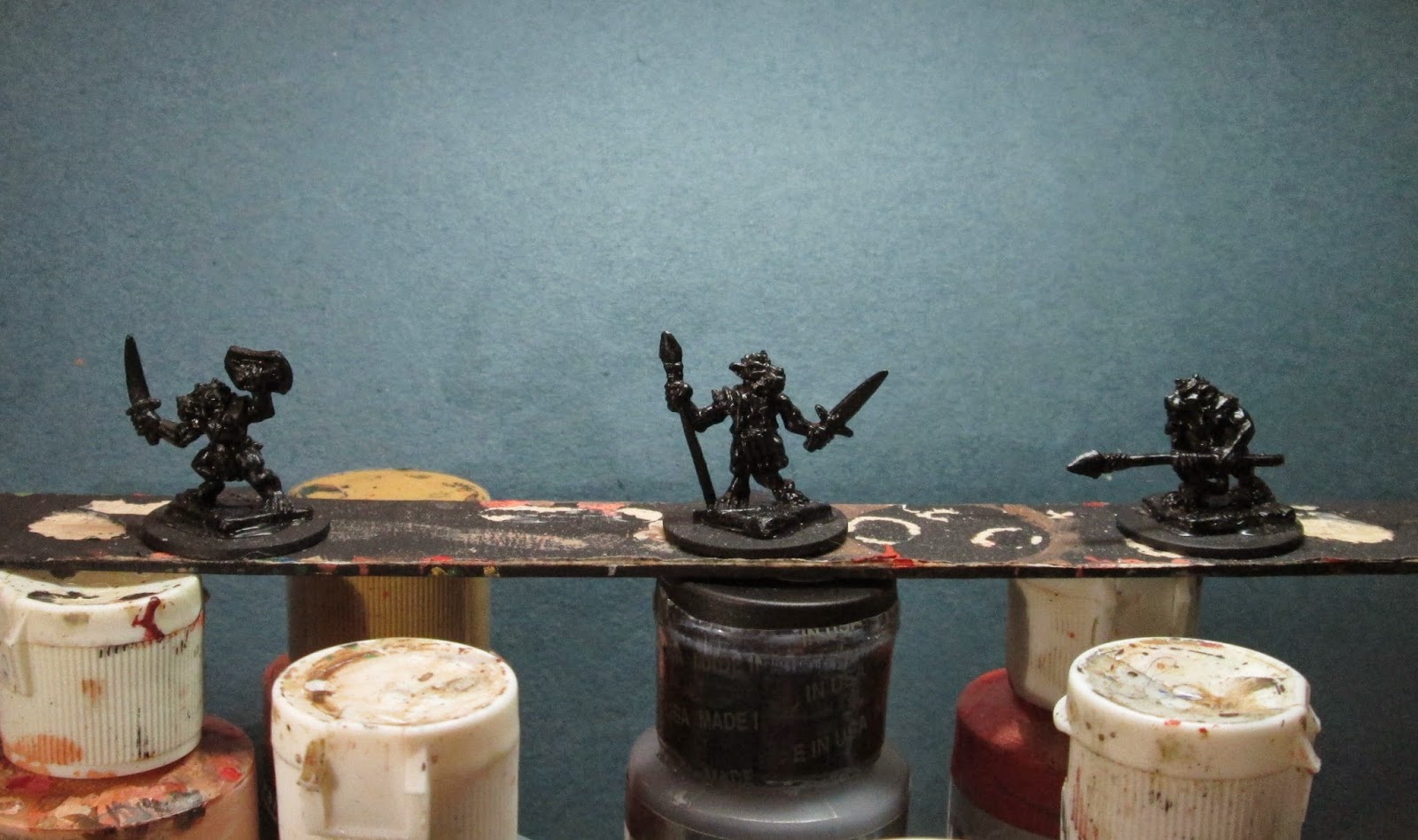 Before I began painting the first group of Kobolds, I had consulted my old trusty D & D Monster Manual, to see how they had described them.  The manual had said that they were, "...a very dark rusty brown, to a rusty black."    So,I had decided I wanted to go for the "rusty black" look and so far I had been happy with how this look had been turning out.  I started the usual way for the Kolbolds, by applying a coat of Folk Art "Barnyard Red" to the figures to get the "rusty" look.  Next,  I worked on their clothing, painting their loin cloths Accent "Real Umber", and the this time I did the rest of the clothing with Americana "Burnt Orange." 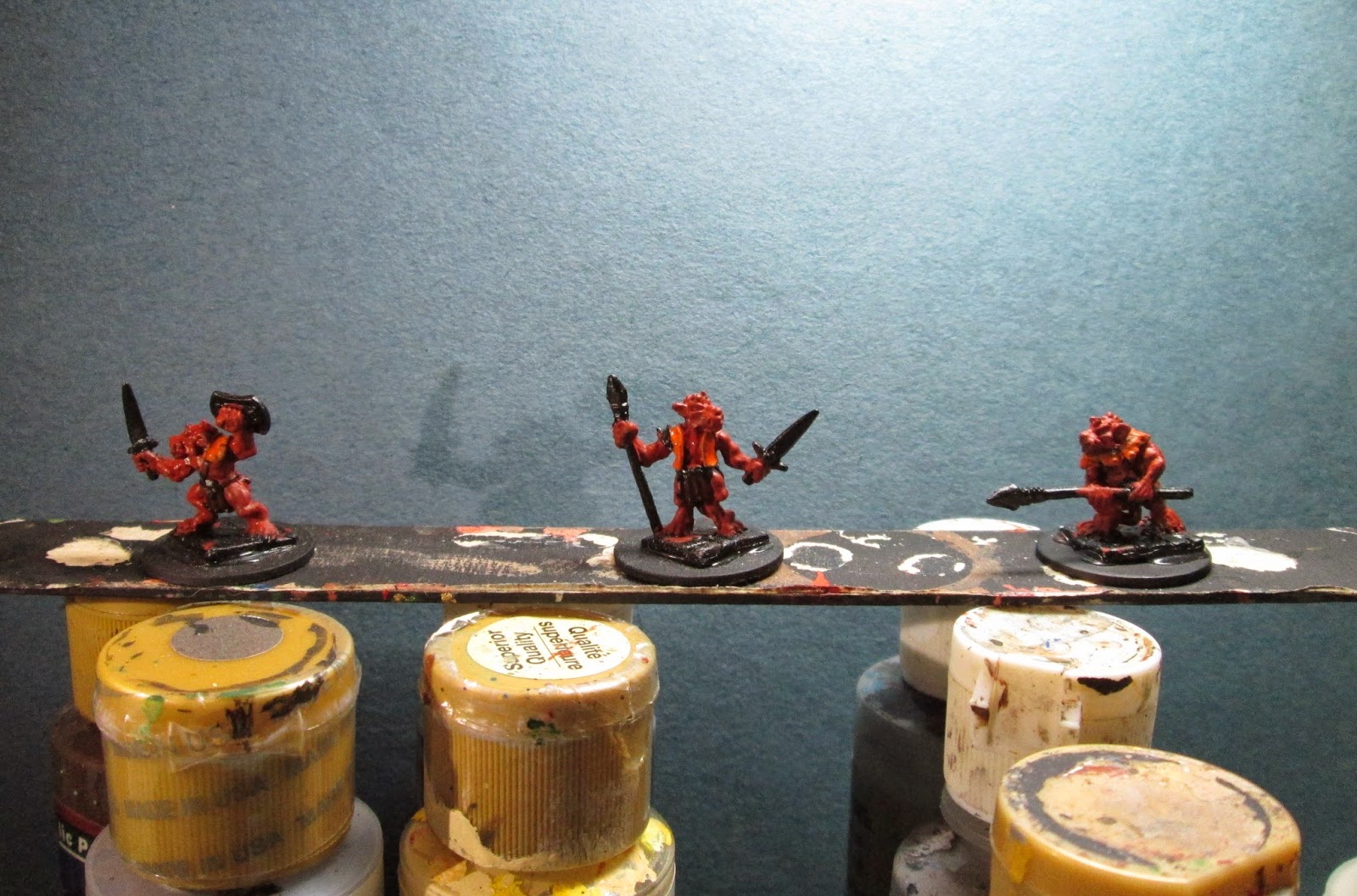 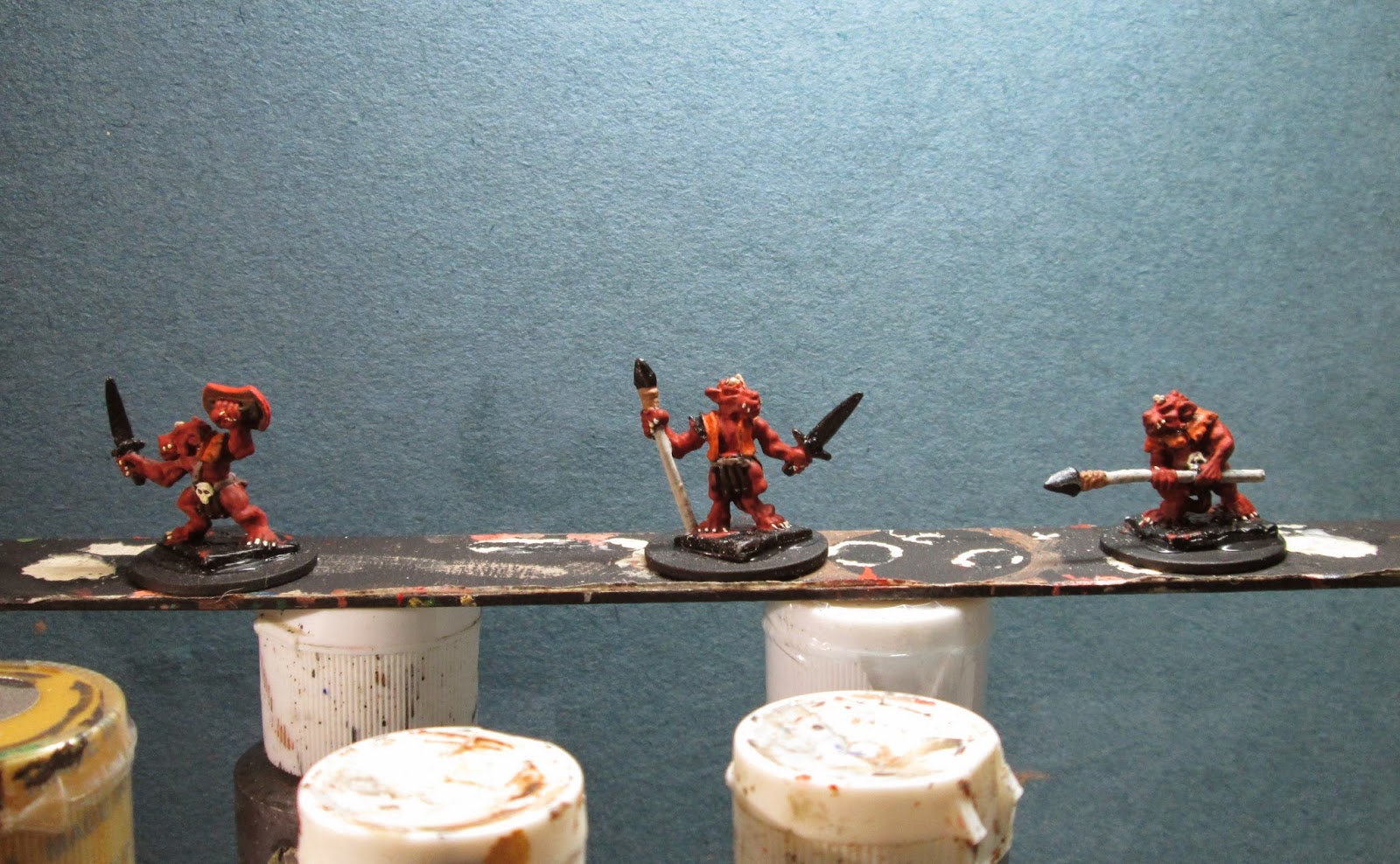 Now I painted the stonework bases with Folk Art "Medium Gray", and I painted the little patches of vegetation on the Spear Kolbold's base with DecoArt "Forest Green".  Then, I did  the metal bits; sword, spear points, studs and buckle, with Ceramcoat "Metallic Pewter", and the armored shoulder pieces on the two with swords using Accent "Princely Pewter". 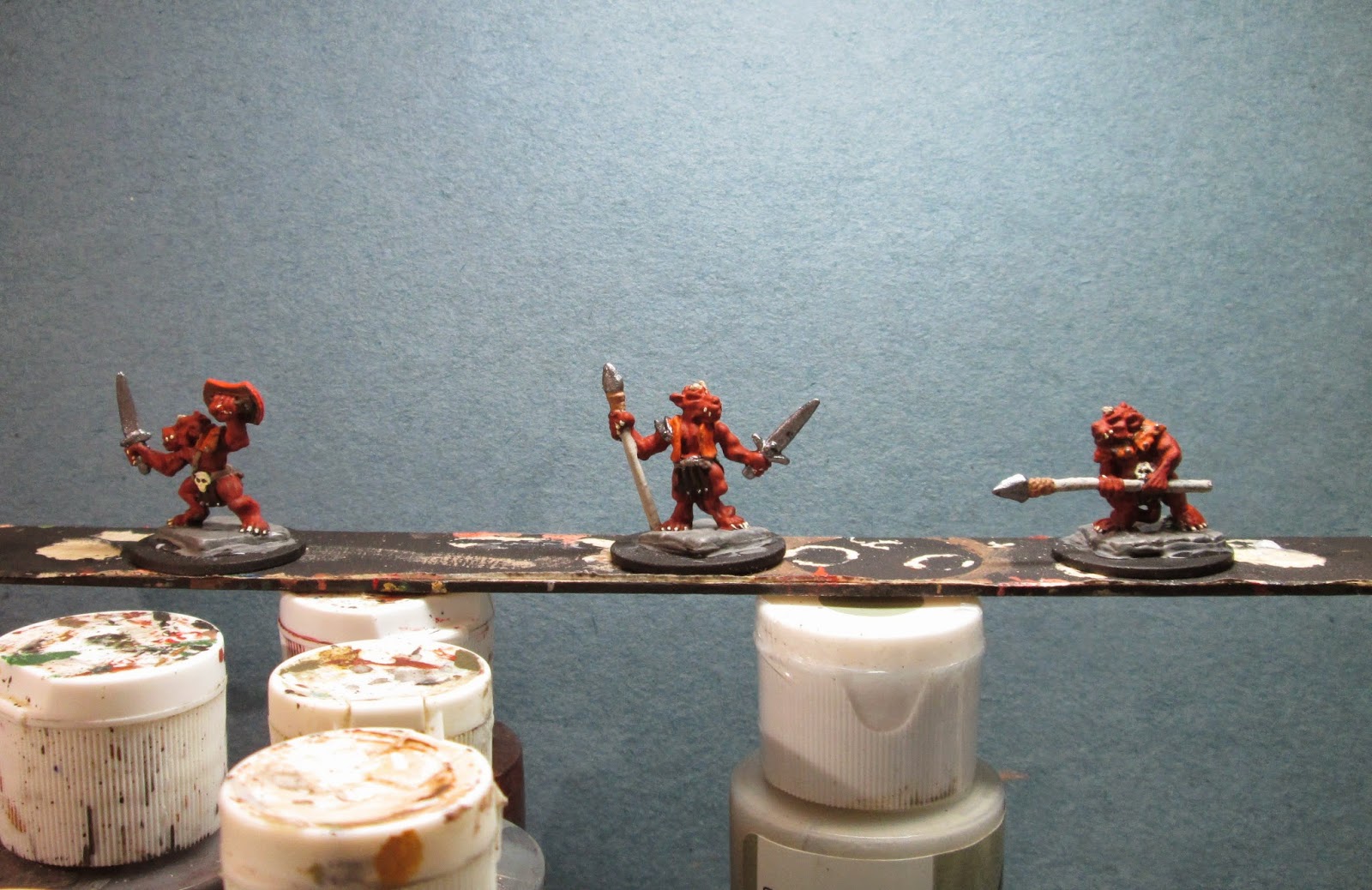 After all the paint had a while to dry, I gave the figures a wash with thinned Vallejo "Black" ink. 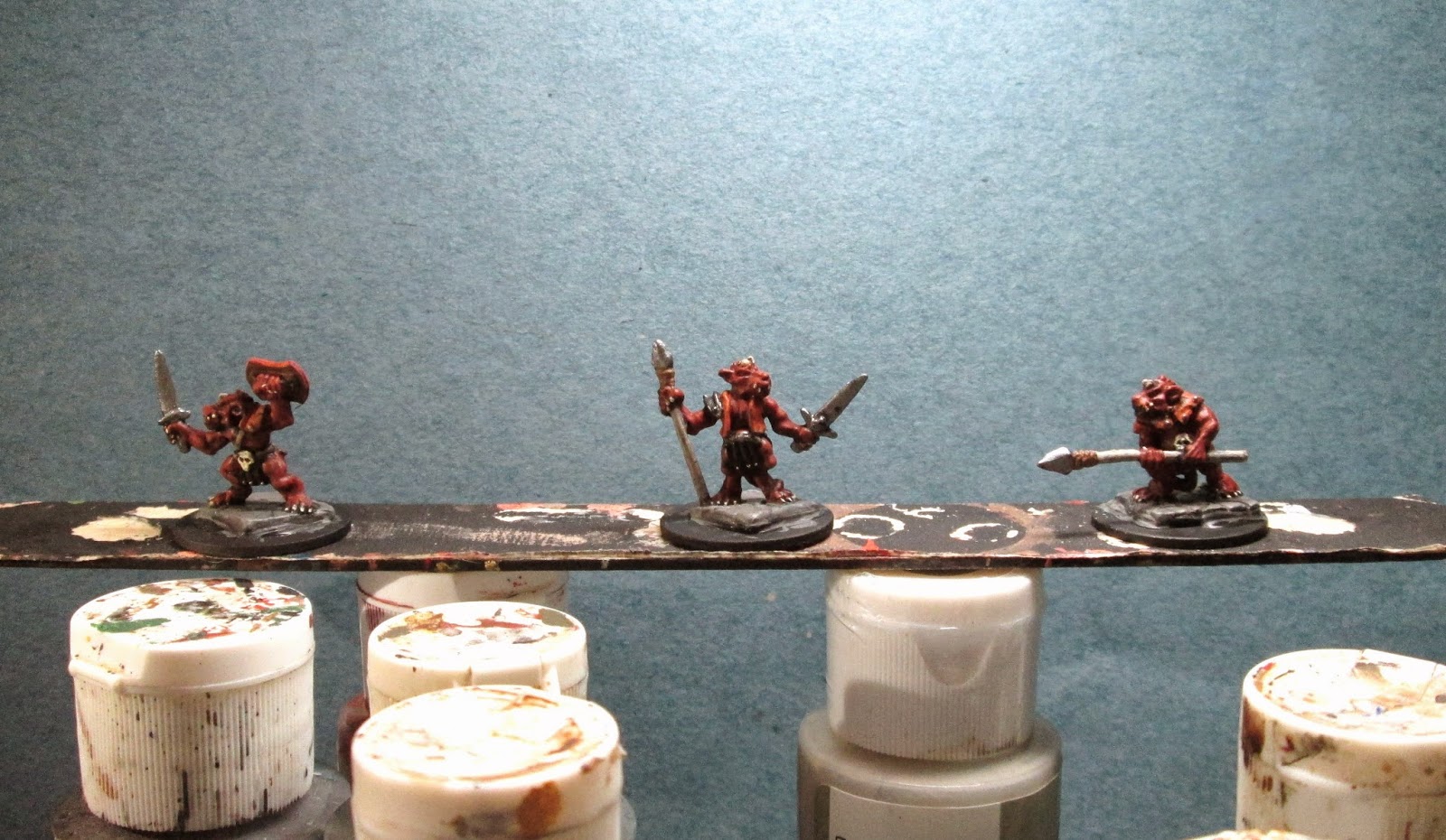 I then went back and gave the figures' skin and clothing highlights with the base colors I had used. I then painted black noses on the Kobolds, and "Cadmium Red" dots for eyes.  I also used the "Buttermilk" to highlight their teeth.   The weapon edges I gave highlights with Folk Art "Silver Sterling".    After everything had time to dry thoroughly, I gave the figures a coat of Ceramcoat "Matte Varnish".  When this was dry, I flocked the bases.  After the bases had overnight to dry, I sprayed the figures with Testor's "Dullcote" 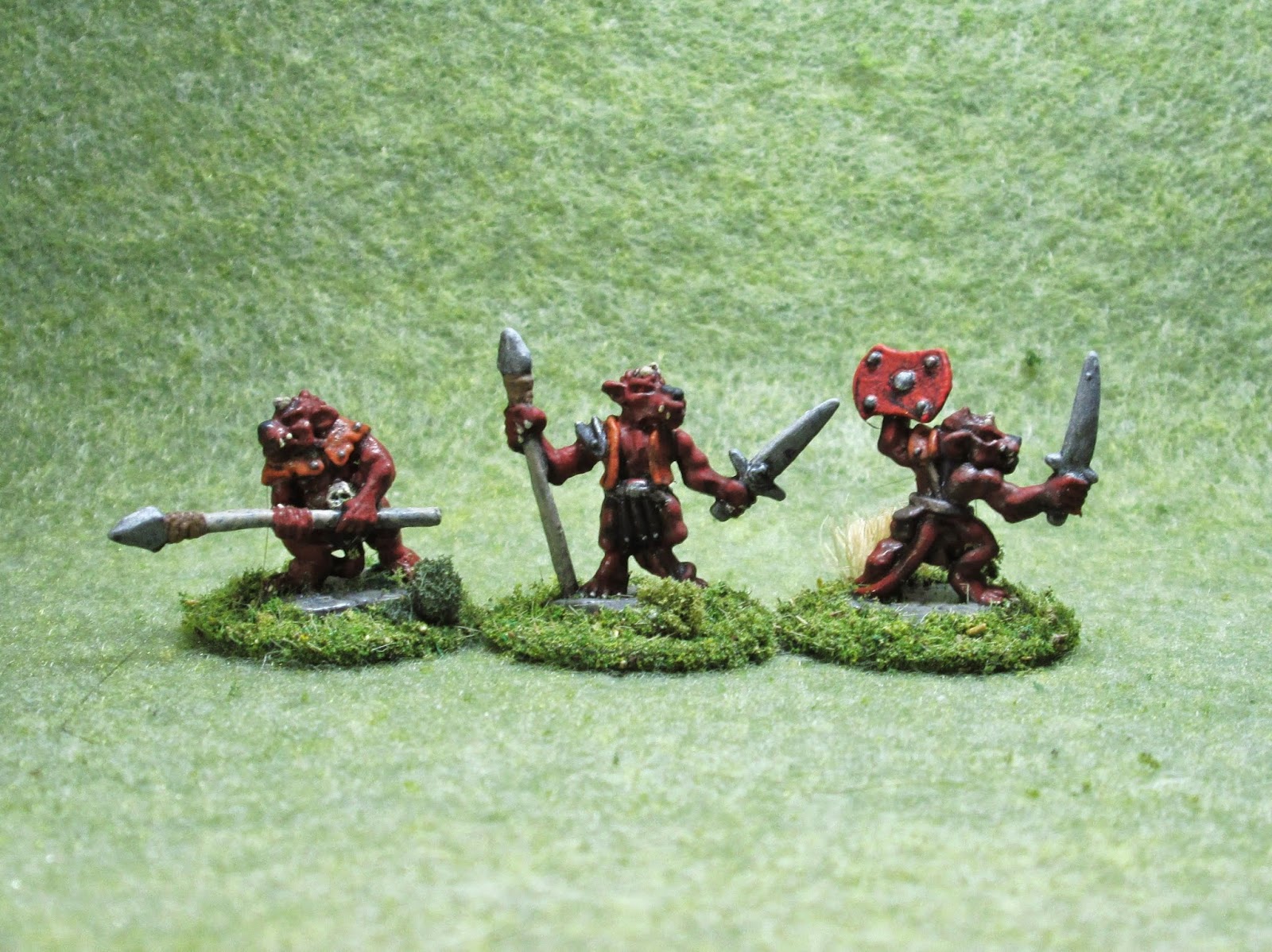 So, that wraps up these little fellows.  Below is a shot of the whole clan ready for action. I think they make a fine little battle group. 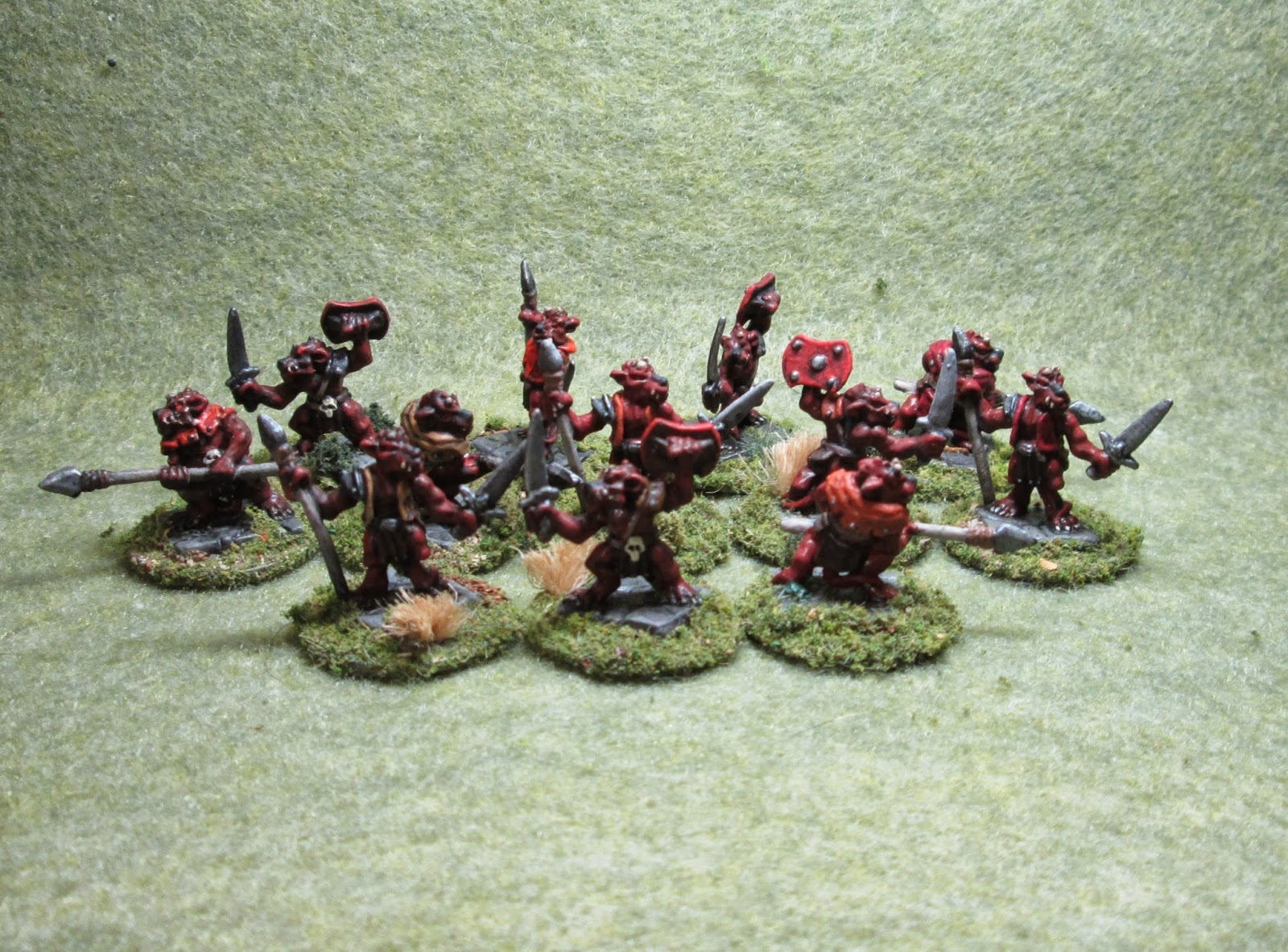 Email ThisBlogThis!Share to TwitterShare to FacebookShare to Pinterest
Labels: Kobolds