This week I also painted the Ice Troll from the Bones II "Expansion Set I".  Being a denizen of the colder realms, I thought I'd do him up in a bluish color scheme.
I prepped the figure in the usual way; soaking it in a dish of water with a couple drops of dish- soap added, then giving it a light scrub with a soft toothbrush, and then rinsing and drying.  I then glued the figure to a 2" white-primed fender washer with Aleene's Tacky glue.  I didn't need to glue the washer to a tongue depressor, as the big 2" size gave me a good surface to hold onto while painting. 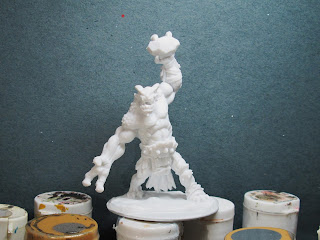 I began by painting his body with DecoArt "Cool Blue".  I then painted the bumpy parts of his back with Folk Art "Settlers Blue, and his chest and abdomen with DecoArt "Light Antique White" 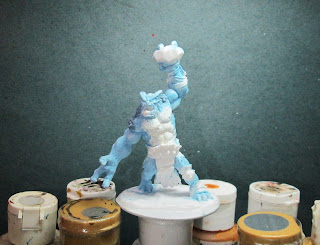 After these first three colors had dried, I gave the entire a figure a wash with Iron Wind Metals "Medium Blue Ink" using a wet brush, to help blend the colors together.   When the ink was dry, I did a little drybrushing using the "Cool Blue" on his arms legs and head, the "Settlers Blue' on his back, and the "Light Antique White" on his chest and abdomen..  Next, I painted his claws with Folk Art Porcelain White" and the rock with DecoArt "Storm Cloud Grey".  I also painted his nipples with the "Settlers Blue" 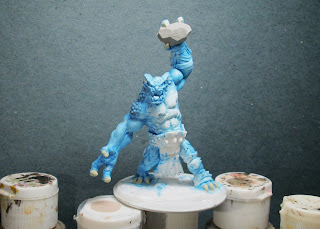 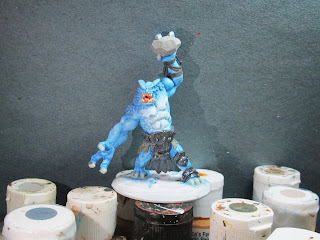 After these colors had had time to dry, I gave the entire figure a wash with GW "Badab Black" wash using a wet brush. 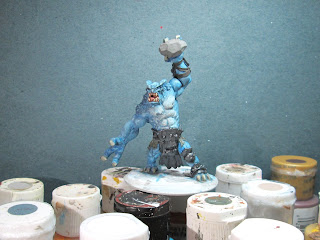 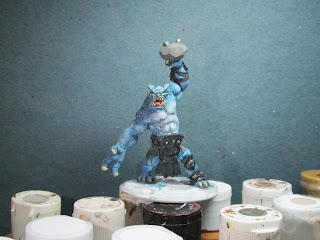 Next, I highlighted his belt and straps with Folk Art "Dark Brown"  His loincloth, and the horns on his back I highlighted with Folk Art "Medium Grey". The cloth under his belt I highlighted with the base "Dapple Grey".  The rock I highlighted with the base "Storm Cloud Grey", and then did lighter highlights with Folk Art "Platinum Grey". I also drybrushed a little of the "Platinum Grey" over the fur on the backside of the loin cloth to help that stand out.    I finished up with highlighting the metal armor with Ceramcoat "Metallic Pewter" followed by some lighter touches with Folk Art "Silver Sterling" along some of the edges. The ear and lip rings I highlighted with the base "Bronze".  Lastly, I painted the troll's integral base White.
At this point I glued a couple small rocks on the front of the base, using Aleene's Tacky glue, to add some foreground composition.  I then painted them using the same colors I had used on the rock in his hand.
When everything had overnight to dry, I gave the figure a coat of Ceramcoat "Matte Varnish".  The next morning I flocked the base with Woodland Scenics "Snow" flock, and added a little bit of unraveled twine next to the rocks on the base to be dead grasses.  Late that afternoon I sprayed the figure with Testor's Dullcote. 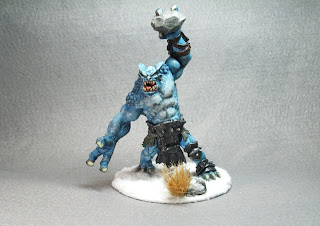 I'm pleased with how this fellow turned out, especially his face.  The black wash made him a little dirtier looking than I had intended, but I think dirtier isn't necessarily a bad thing for a troll.
Posted by Chris Palmer