This week I painted the Innkeeper and Wench from the Townsfolk set.  Since they were both such basically simple straightforward figures, I thought I'd work on both of them at the same time.
I prepped the couple in the usual way; soaking them in a dish of water with a couple drops of dish- soap added, then giving them a light scrub with a soft toothbrush, and then rinsing and drying.  I then glued each figure to a 1" black-primed fender washer with Aleene's Tacky glue, and glued the washers to a tongue depressor with a couple drops of Elmer's White Glue. 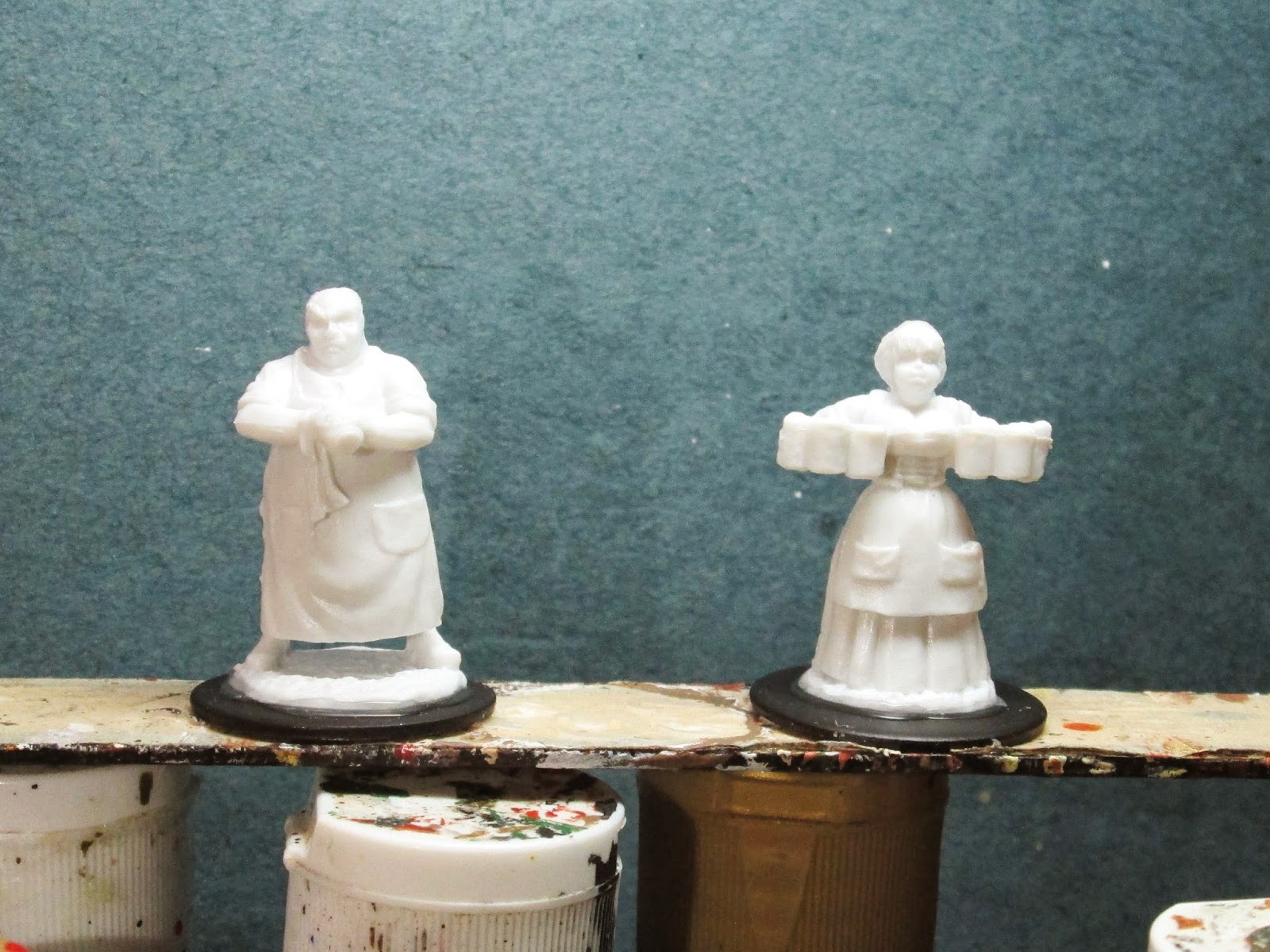 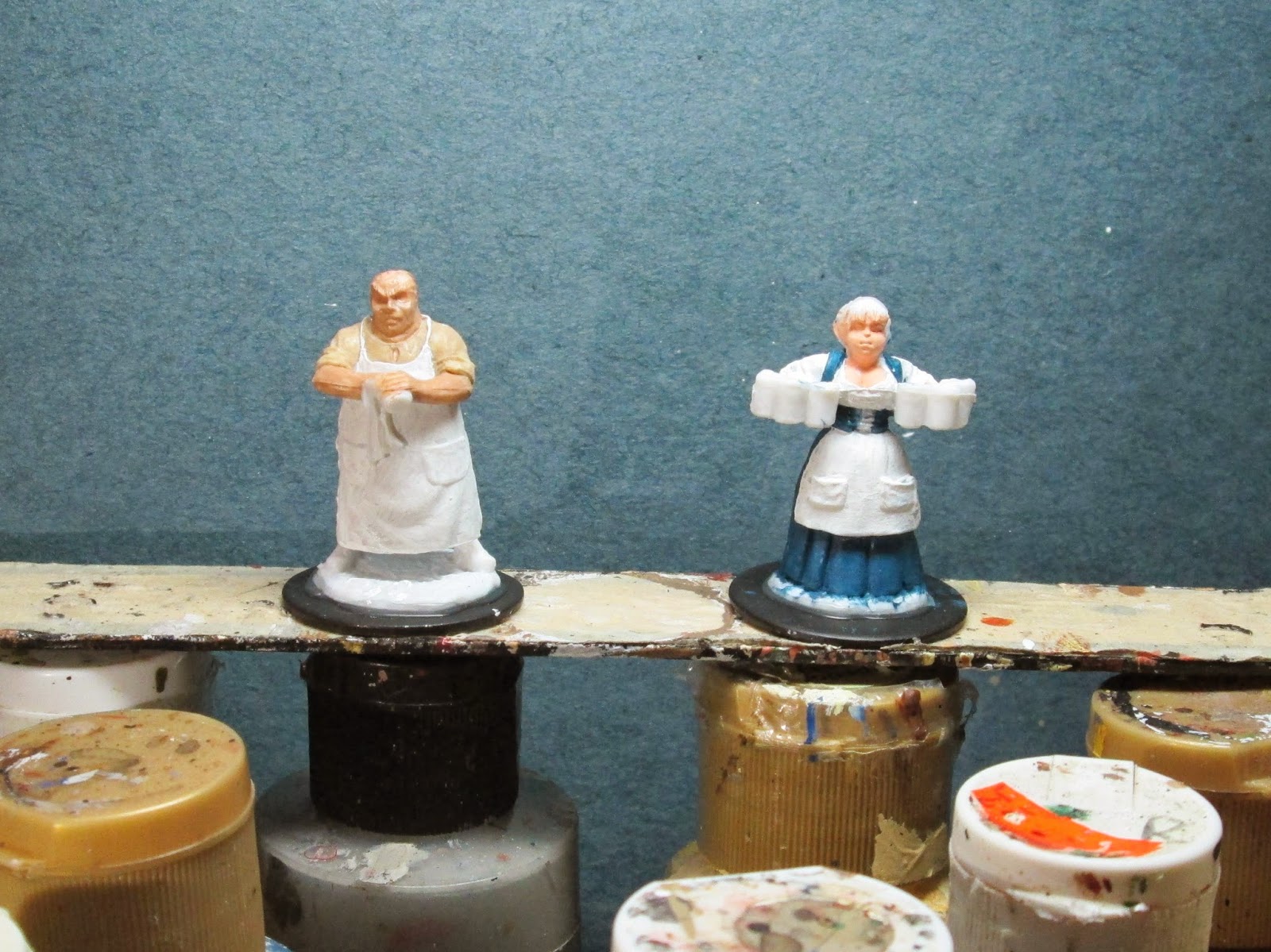 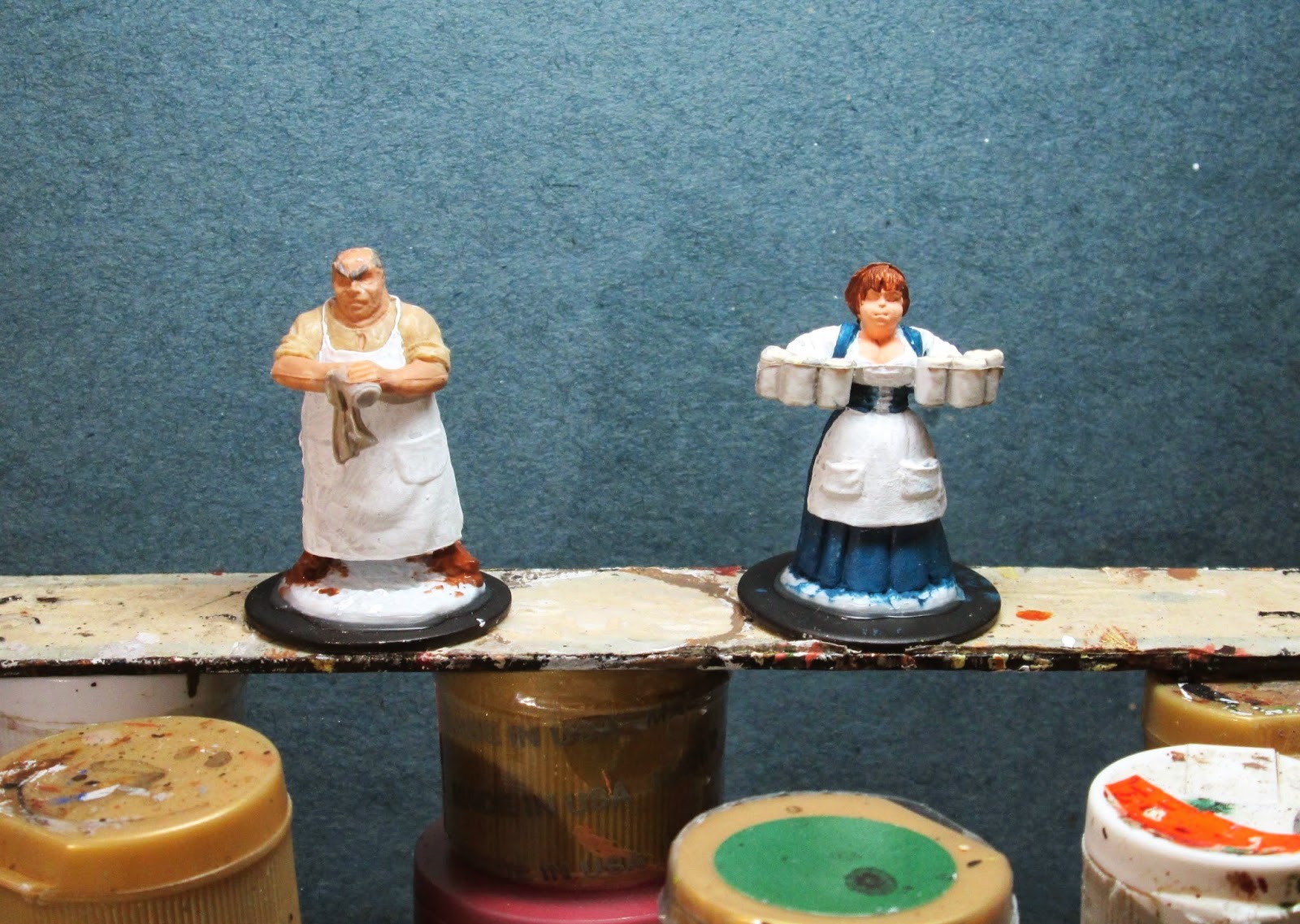 After everything had a chance to dry, I then gave both figures a head to toe wash with GW "Agrax Earthshade" wash, using a wet brush. 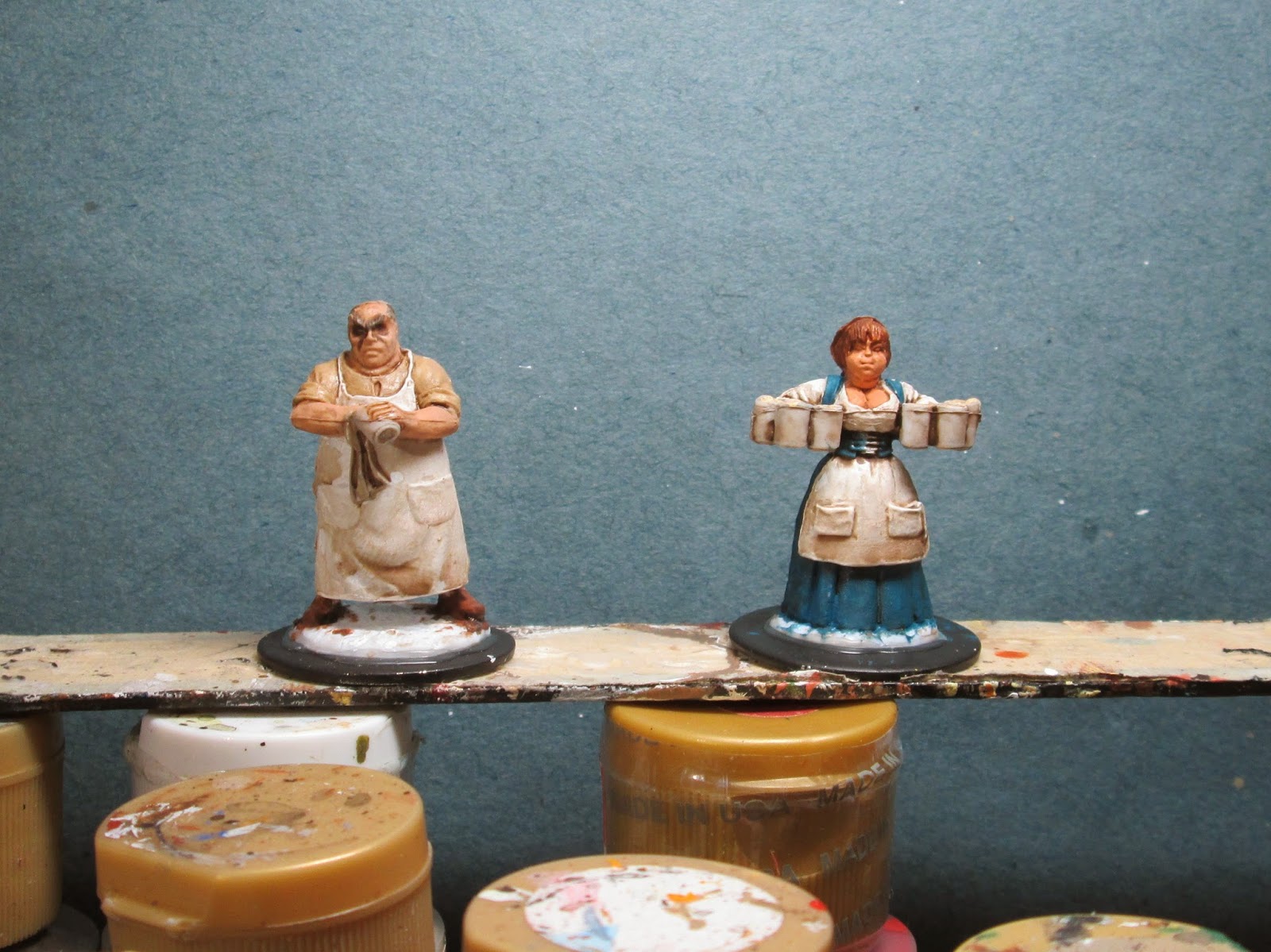 When the wash was good and dry,  I began the detailing.  I started with the eyes, doing both sets with White whites and then Black pupils.  Next, I did their hair highlights, using the "Slate Grey" for the Innkeeper, and Americana "Sable Brown" for the Wench.  Skin highlights were next with the base skin colors I had used.  I followed with doing highlights on the pants and dress with the base "Wedgwood Blue", I then mixed in a little Folk Art "Settlers Blue" to the "Wedgwood Blue"to lighten it, and did some further highlights. I then used the base "Khaki Tan" to highlight the Innkeeper's shirt. The aprons were next, and I used plain white to do their highlights, along with the Wench's shirt as well.  I highlighted the cleaning rag with the base "Barn Wood", and the beer foam with the base "Buttermilk". I wrapped up the figures with doing small designs on each of the mugs with a mix of the "Wegdewood" and "Settlers" blues.  lastly, I painted the bases and washers with GW "Khemri Brown".
I let the figures sit overnight, and the next morning I gave them a coat of Ceramcoat "Matte Varnish".  That afternoon I gave the figure a coat of Testor's "Dullcote" spray varnish. 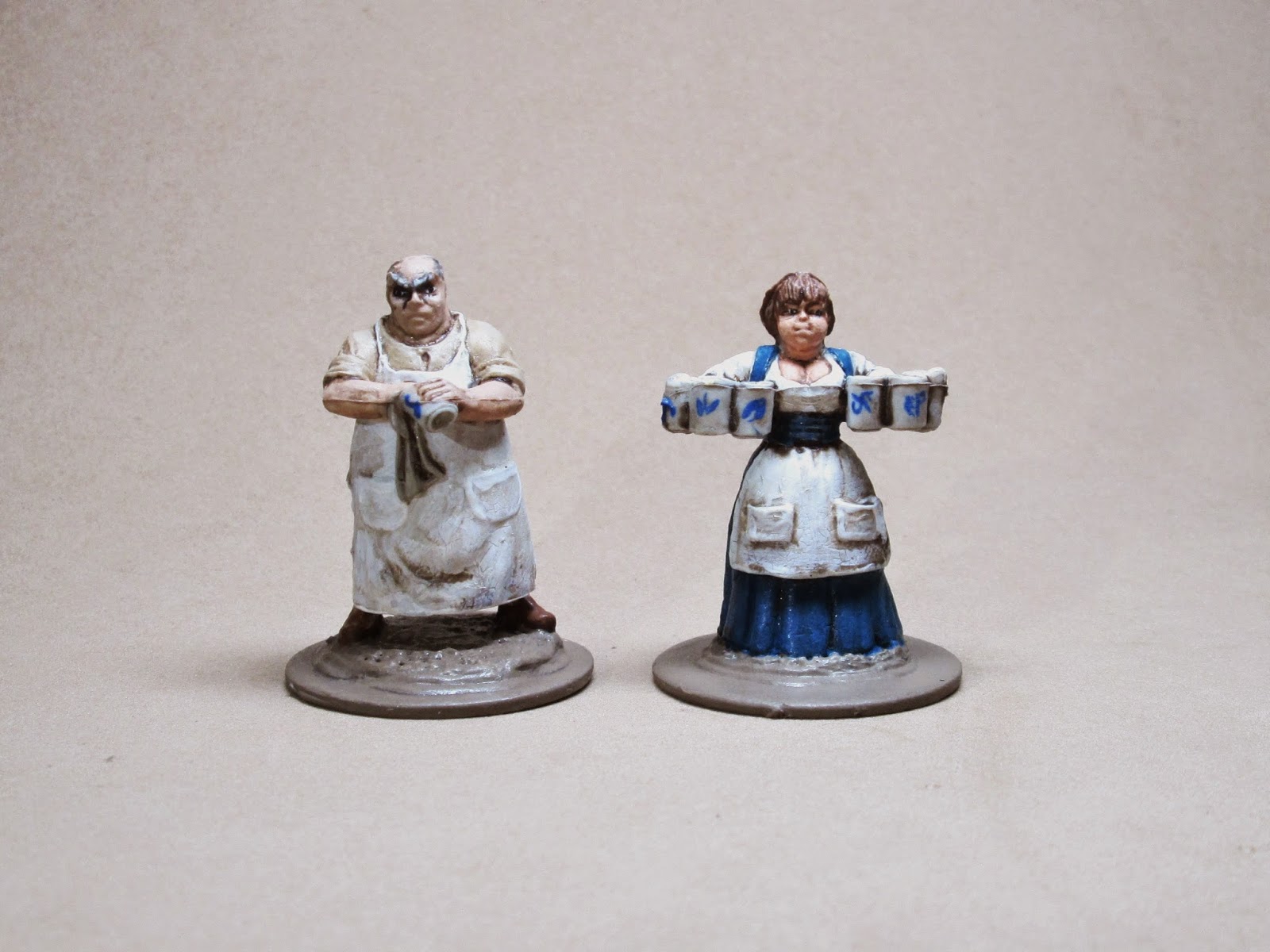 Well, file these with figures that might have been great.  I unfortunately do not often notice the flashing on these bright white Bones figures until after I've started, and by then it's too late; much to the detriment of these figures.  It seems I do a figure like these with the bad flashing, then become hyper about checking, then get several flash free figures and get lazy and start not checking, then get surprised with another like these...it's a bad cycle.  Granted these are "background scenery' figures in most cases, so it's not the worst that could happen.  I also was a little heavy handed with the wash on the Innkeeper's face, and it left a bit of a splotch by his nose on the left, I tried my best to hide it, but you can still see a bit of it. Oh, well. So, I move on to the figure next in line...

Be sure to tune in Thursday for another Bones II figure.

Email ThisBlogThis!Share to TwitterShare to FacebookShare to Pinterest
Labels: Townsfolk