This past week I painted the Stone Giant Guard from the Bones 4 Lost Valley Expansion.  I had painted a Stone Giant before when I did the one that came with Bones 2 Expansion Set 1, and since I liked how that one had turned out,  I figured I'd just copy how I had done that one to some extent.
I prepped the figure in the usual way, soaking it in a dish of water with a couple drops of dish-soap added, then giving it a light scrub with a soft toothbrush, and then rinsing and drying it.   Then, after trimming the figure's integral base a little, I glued the figure to a black-primed 2" fender washer with Aleene's Tacky glue, and then used some blue-tac to stick it to the top of a pill bottle. 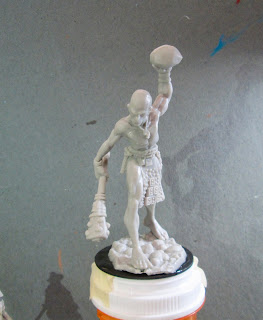 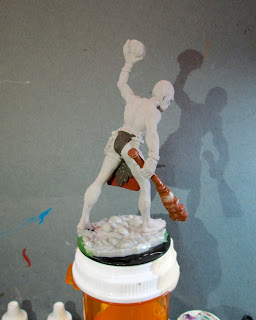 Next, I painted his belts and straps with Citadel "Snakebite Leather", and the wraps around his club with Accent "Real Umber".   After that, I painted the buckles, chisels, and other metal bits with Americana "Zinc", and I painted the cord around his neck with Ceramcoat "Territorial Beige". 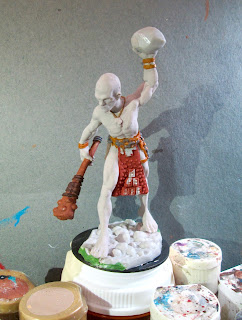 I then painted the rectangles on his apron with Americana "Charcoal", and the ones hanging at his belt with Citadel "The Fang".  I also used "The Fang" to paint the knobs on the club, and I painted the crystals on his necklace with Americana "Margarita". After that, I worked on the rock he was holding, as well as the rocks on the base, painting them with Americana "Neutral Grey" and then splotching it with some Folk Art "Dapple Grey", and some of the "Charcoal".  I let everything dry for a while and then gave the entire figure a coat of Citadel "Nuln Oil" wash. 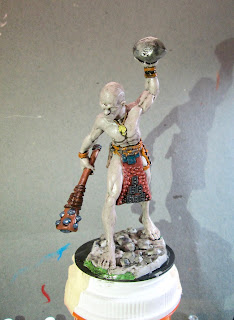 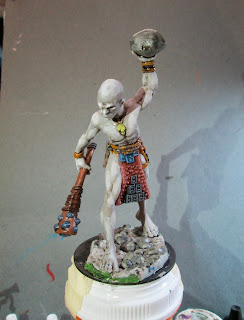 Next, I highlighted his belts and straps with Ceramcoat "Maple Sugar Tan", and the wraps on the club with Nicole's Brown.  I then highlighted the club with Americana "Sable Brown", and the stones in the club with Folk Art "Cloudy Day".  After that,  I drybrushed the throwing rock and the stones in the ground, with some Americana "Dove Grey".  I then painted the hammer head, buckles, and studs in the apron with Folk Art Metallics "Gunmetal Grey", and lastly, I painted the base around the rocks with "Americana "Mississippi Mud".
I let the figure dry overnight and the next day I gave it a coat of Americana "DuraClear Matte" varnish.    Then, when  the varnish was dry, I used some white glue to flock the base around the stones.  Another overnight dry, and I sprayed it with Testor's "Dullcote".   When the "Dullcote" was dry, I went back and painted the crytal necklace with Tamiya "Clear Green". 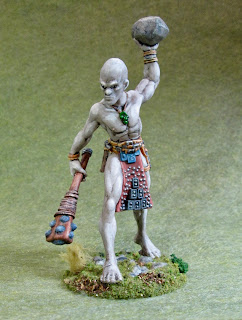 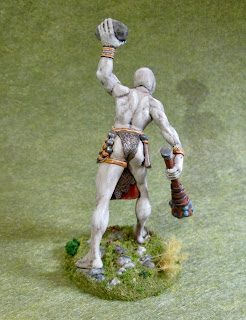 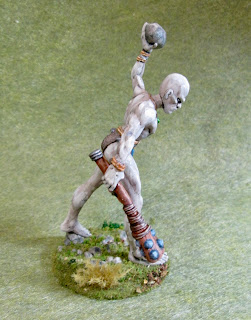 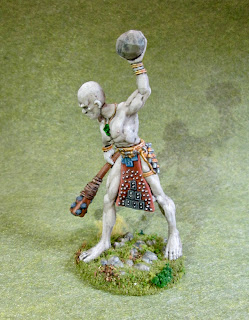 I'm really pleased with how this big guy turned out.  I'm looking forward to tackling the Stone Giant Champion now.