This past week I painted theTerror Fish, from the Bones 4 Dreadmere Expansion.
I prepped the figure in the usual way, soaking it in a dish of water with a couple drops of dish-soap added, then giving it a light scrub with a soft toothbrush, and then rinsing and drying it. 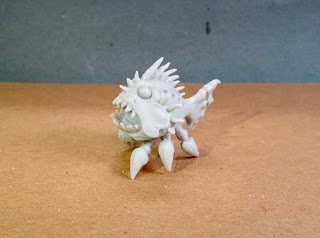 I thought the figure reminded me a bit of those deep sea fish that have the little illuminated antenna that hover over their head to attract prey; so I set about modifying the figure to resemble one of those.  First, I sliced off one of the spikes on its head.  I then drilled a little hole where the spike was, and inserted a a short bit of translucent plastic string I had; gluing it in place with superglue.
I then glued the figure to a black-primed 1" fender washer with Aleene's Tacky glue, and then glued it to a tongue depressor with a couple drops of Elmers glue.
For fun I thought I'd base the color scheme off of the Dory character from the animated movie "Finding Nemo".  Dory is based on a real fish called a Royal Blue Tang. 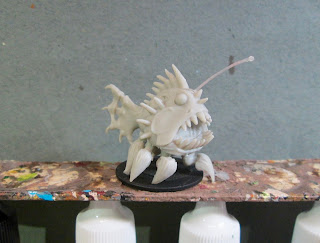 I began by painting the body of the fish with Americana 'True Blue".  I then painted markings on the body as close as I could to those that appear on Dory, and I painted the eyes, with Ceramcoat "Black".   When all the paint was dry, I gave the painted areas a wash with Citadel Nuln Oil wash. 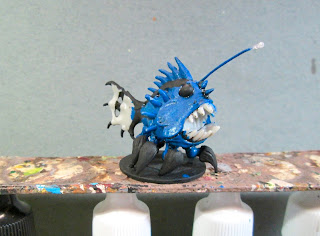 Next, I painted his tail fin and side spikes with Accent "Golden Harvest".  After that, I painted the inside of his mouth with Apple Barrel "Apple Lt. Pink", and his teeth with with Americana "Bleached Sand". 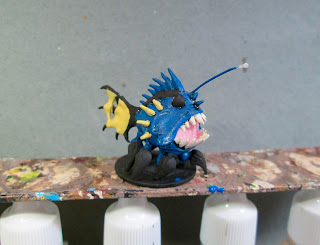 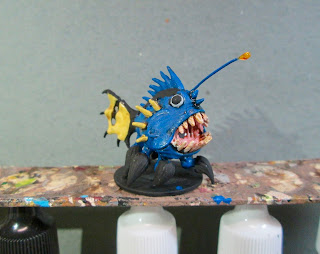 Next, I highlighted his body with Reaper MSP Bones 'Tropical Blue", and highlighted his tail and side spikes with Crafter's Acrylic "Bright Yellow".  After that, I highlighted his feet and his black markings with Citadel "The Fang", mixed with some of the base "Black"; and then highlighted his teeth with Crafters Acrylic "Light Antique White".   I also highlighted his antenna dot with some of the "Bright Yellow" with a dot of Americana "Snow White".  I also used this white to add eye highlight dots.   Lastly, I painted the entire base with "Americana "Mississippi Mud".
I let the figure dry overnight and the next day I gave it a coat of Americana "DuraClear Matte" varnish.    Then, when  the varnish was dry, I used some white glue to flock the base.  Another overnight dry, and I sprayed it with Testor's "Dullcote".   When the "Dullcote" was dry, I went back and hit its eyes, the light dot on his antenna,  and this teeth with a little Americana "DuraClear Gloss" varnish. 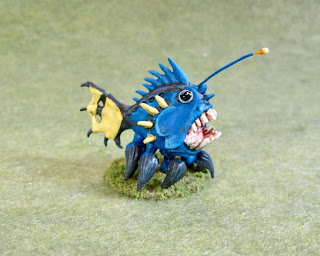 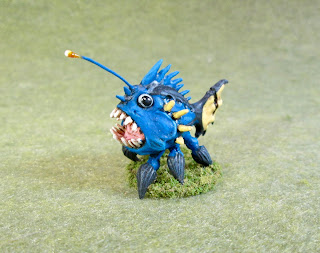 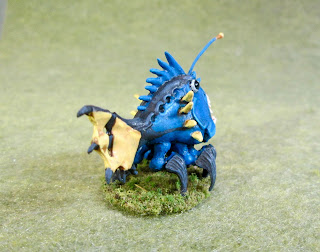 I'm really happy with how killer Dory came out. :)   I like the addition of the light antenna, and I think the color scheme is kind of fun.
Posted by Chris Palmer