This past week I painted the Nagendra (Snake Cultist) Swordsmen, Glaivesmen, and Archers, from the Bones 4 Core Set; in my ongoing efforts to round out my Ghost Archipelago Bestiary.  There were 6 Nagendra that came with the Core, and I purchased an extra set of 6 so I could make a unit of 10 with an additional Snakewoman Shaman.  Thus week I painted the four Swordsmen, two Glaivesmen, and two Archers from the sets.
I prepped the figures in the usual way; soaking them in a dish of water with a couple drops of dish-soap added and then rinsing and drying.  I wanted there to be a little variety in the figures, so with one of the swordsmen of each pose, I cut the sword arm at the elbow and reglued it, with Gorilla Superglue gel, at a slightly different angle to give a different look to the figure.  I also did this with the archers.  I then glued the figures to 1" black-primed fender washers with some of the Gorilla Superglue Gel glue.  I then glued four figures to 2 tongue depressors with a couple drops of the Elmer's glue each. 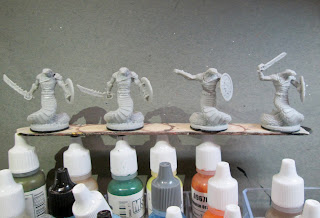 Before I began, I decided I wanted to give the figures a base coat with Krylon Camouflage with Fusion "Woodland Light Green" to give better opacity to the green paint I would be using.  So, I removed all of them from the tongue depressors and sprayed them. Then, when dry, I reglued them to the tongue depressors. 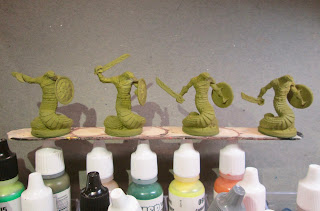 I began by painting their bodies with Americana "Festive Green", and their belly scales with Americana "Margarita".  After that, I painted the unscaled portions of their arms with Crafters Acrylic "Wild Green". 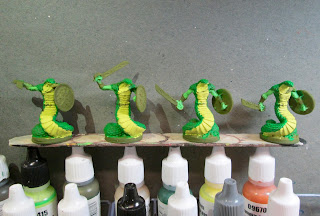 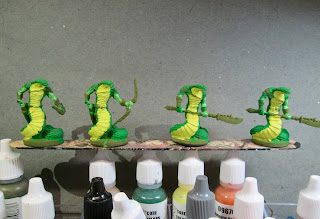 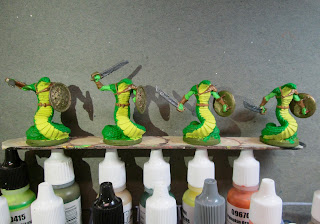 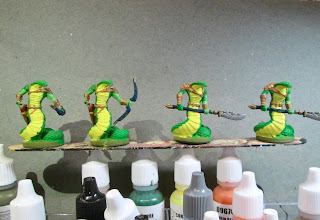 After everything had dried for a while I gave the figures a complete wash with Citadel "Nuln Oil" wash, except for their sword and glaive blades.  When the wash was dry, I drybrushed their body scales with the base "Festive Green", and then some of the "Festive Green" mixed with some Reaper MSP Bones "Dungeon Slime".  Next, I highlighted the belly scales with the base "Margarita", and then with some of the "Margarita" mixed with some Americana "Snow White".  After that, I highlighted the scaleless parts of the arms with the base "Wild Green". 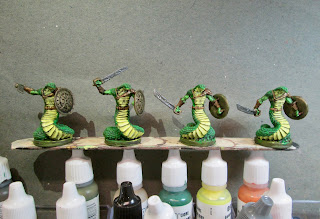 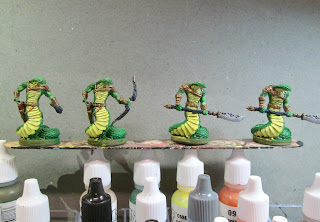 Next, I gave their sword and glaive blades a wash with some thinned Iron Wind Metals "Mid Blue" Ink, and then highlighted the Snakemen's straps, belts, and quivers with the base "Mustard Seed".  I then painted the lacing on their wrist guards with Ceramcoat "Maple Sugar Tan", highlighted the shield straps with the base "Light Cinnamon", and the fletchings with Crafter's Acrylic "Orange Spice".  After that, I highlighted the bows and glaive poles with a drybrushing of Crafter's Acrylic "Tropical Blue; and the shields, armor, sword hilts, bow and glaive fittings, and belt buckles with Ceramcoat "14K Gold".  By now the ink wash on the sword and glaive blades had dried, and I highlighted them with Ceramcoat "Metallic Silver".  I finished up by painting their eyes with Reaper MSP "Holly Berry".
I let the figures dry overnight and the next day I gave them a coat of Americana "DuraClear Matte" varnish.    Then, when  the varnish was dry, I used some white glue to flock the bases.  Another overnight dry, and I sprayed them with Testor's "Dullcote". 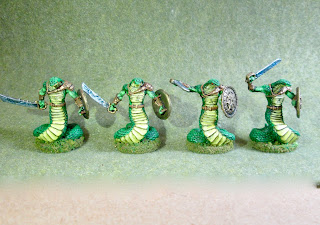 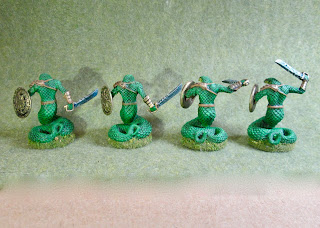 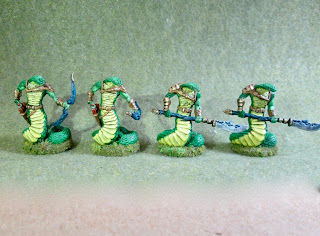 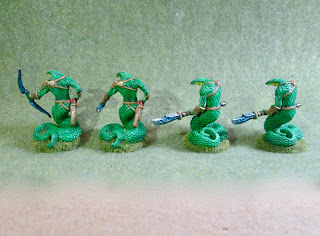 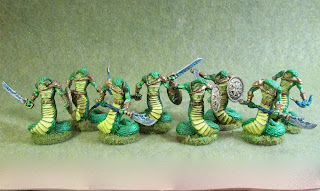 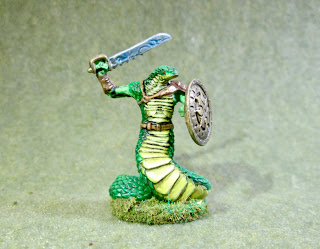 I'm really happy with how these guys turned out.  I decided to go with just a simple coloration on them since I was doing so many, rather than attempt to repeat a fancy pattern on each one, and I think they turned out looking just fine in the end.  I just need to paint the two armored ones and one of the female shaman figures to complete my unit.
Posted by Chris Palmer