This past week I painted Jurden, Half-Orc Paladin , from the Bones 3 Heroes I Set.   A few weeks ago I had used him as one of my first test weapon-swap figures, and I thought it was about time I actually painted one of them.  In looking at this figure, there wasn't anything particularly orc-ish about it, so I decided to just paint it as a regular human.
I prepped the figure in the usual way; soaking it in a dish of water with a couple drops of dish-soap added, then giving it a light scrub with a soft toothbrush, and then rinsing and drying it.    I then glued the figure to a black-primed 1" fender washer with Aleene's Tacky glue, and then glued the washer-mounted figure to a tongue depressor with a couple drops of the Elmer's glue. 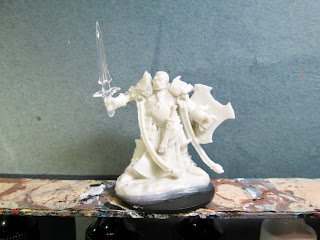 I began by painting almost the entire figure with Black, being careful not to get any on the clear blade.   When the Black was dry, I drybrushed the figure with  Folk Art Metallics "Gunmetal Grey".  I then passed over it with a lighter drybrush of Ceramcoat "Metallic Silver" 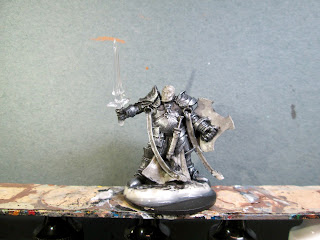 I used the Black again at that point to paint the back of the shield. I painted his head with Americana "Shading Flesh", and while that dried, I painted his tabard and the front of his shield with Crafter's Acrylic "Bright Blue".  I then went back to the head and went over it with some very slightly thinned Americana "Asphaltum". 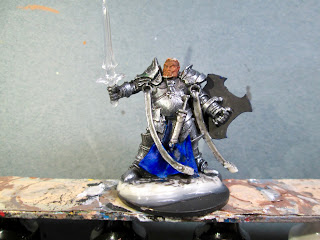 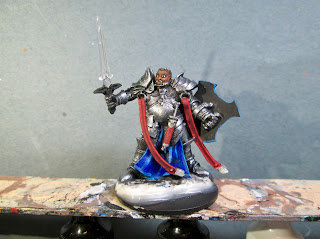 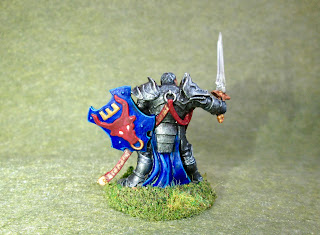 Well, I have to declare my first painted weapon-swapped figure to be a big success.   I'm really happy with the way this guy came out; and I think the crystal look of the sword was worth the extra effort it took to keep paint off it during the whole process.
Posted by Chris Palmer