This week I completed the Warg figure from the Bones II original figures set.  I didn't realize he was a Warg when I started painting him; I just assumed he was a large wolf.  So, I decided to paint him as an Arctic Wolf because,  as with the rest of the animals I've been doing recently, I was painting him up for Frostgrave.
I prepped the figure in the usual way; soaking it in a dish of water with a couple drops of dish- soap added, then giving it a light scrub with a soft toothbrush, and then rinsing and drying it.  I then glued the figure to a white-primed 1.25" fender washers with Aleene's Tacky glue, and then glued the washer-mounted figure to a tongue depressor with a couple drops of the Elmer's glue. 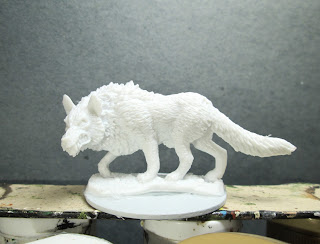 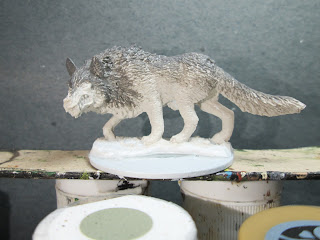 I then mixed a little of the "Zinc" into some Black and painted his very top spine area and the tip of his tail and also around his face and ears.   I then painted his mouth and nose Black, and then I painted his eyes.    Next, I painted his teeth with Americana "Buttermilk, followed with highlights using Crafter's Edition "Light Antique White".   I used some of the "Zinc" to highlight his nostrils.
Lastly, I painted the base White.   When everything had overnight to dry, I gave the figure a coat of Ceramcoat "Matte Varnish".  Then, the next morning I flocked the white areas with Woodland Scenics "Snow" flock and added some tufts of twine to represent dead grasses.  Later that afternoon I sprayed the figure with Testor's Dullcote. 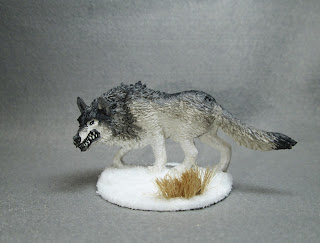 I like the way this fellow turned out.  I think he will make quite a formidable wolf to encounter in the frozen city.
Posted by Chris Palmer