I also completed the Sharkman figure this week from the Bones II Core Set "Under the Sea" group.  I didn't like this figure at first because it is sculpted oddly, so that the whole body of the Sharkman is slanted off to one side.  I have looked at a couple of these figures, and they all seem to share this quality.  It doesn't seem to be a typical Bones bent leg problem, but actually the way the figure is constructed.  I decided that putting something under the foot on the tilted side might help bring the figure back up into alignment.  Also, there were gaps where the arms were attached to the body that would need to be filled.  I sometimes think it would be better for Reaper to supply figures like this unassembled so the hobbyist could put them together with more care than the Chinese factory worker does. 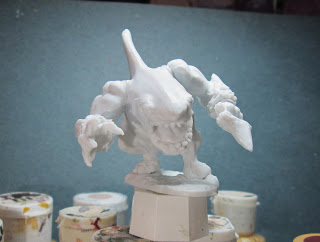 The figure was easy to pry from its base with a little help from a hobby knife. And with some two-part epoxy putty I made a small boulder for the Sharkman's right foot to sit on, and filed the space under the left foot where it's peg no longer fit directly into it's mounting hole.  I also filled the small gaps at his shoulders. 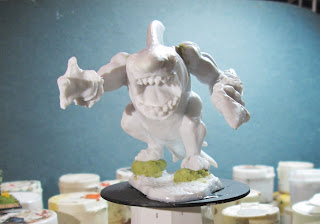 Backtracking a little,  I prepped the figure in the usual way; soaking it in a dish of water with a couple drops of dish-soap added, then giving it a light scrub with a soft toothbrush, and then rinsing and drying.  I then glued the figure's separate base to a 2" black-primed fender washer with Aleene's Tacky glue.  Once the figure's base was firmly glued to the washer, I then added my new boulder foot rest.  The 2" washer was big enough to just hand hold, so I didn't glue it to a tongue depressor.
I began by painting his upper body with Crafters Acrylic "Storm Cloud Grey", and his undersides with White.  His open mouth I painted with Crafters Acrylic "Cherry Blossom Pink". 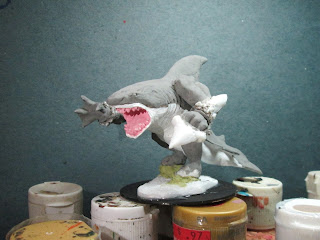 Next I painted his claws (both feet and hands) with Folk Art "Platinum Grey", and his teeth with Americana "Buttermilk".  I painted his sharktooth weapon with a Black pointy part and a Folk Art "Barn Wood" base. 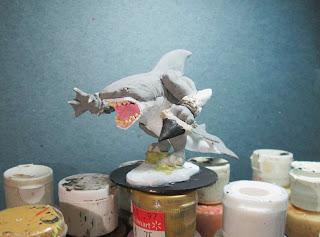 I then painted the wooden parts of his arm guards with Americana "Mississippi Mud", the wrap around his wrist with Crafter Acrylic "Forest Green" and the chains and handle of his weapon with Cermacoat "Walnut".  I also painted the rock he's standing on with Americana "Asphaltium". 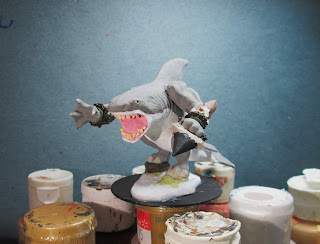 I fished off the chain and the weapon handle with my usual rust effects, using an old frazzled small brush and stippling Crafters Edition "Spice Brown" over the chains.   Next, I did the same, but to a lesser extent with Accent "Golden Oxide".  Lastly, I drybrushed them with Ceramcoat "Metallic Pewter".
I then painted all the shells and other baubles hanging on his wrist guards with an assortment of yellows, grays, and blues I grabbed haphazardly off my painting table. Then, I drybrushed the rock he's standing on with first Americana "Sable Brown", followed by Americana "Khaki".   When all the paint had a few hours to dry, I gave the entire figure a wash with diluted Black in with a little drop of dish soap added. 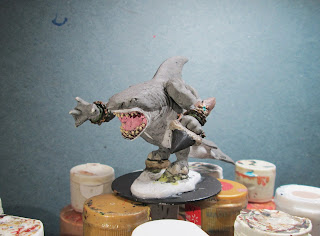 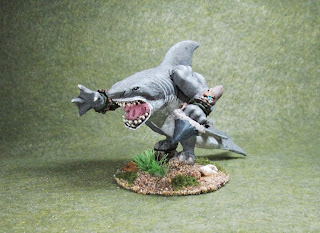 I'm pleased with how Mr Sharkman turned out.  And I think the base turned out suitably so that he won't look too out of place either on land or an underwater setting.  I may go back and hit the eyes with a little gloss varnish as I think they look a little flat and not beady enough.
Posted by Chris Palmer