This week I also completed the Mountain Troll from the Bones II, Expansion Pack 1.  I tend to hesitate to select the large figures to do, as I somehow find the prospect of painting them intimidating; and I want to try and make more of an effort to work on them in the future.  This guy, for all his size, was a nice easy figure to complete.
I prepped the figure in the usual way; soaking it in a dish of water with a couple drops of dish-soap added, then giving it a light scrub with a soft toothbrush, and then rinsing and drying.  I then glued the troll to a 2" black-primed fender washer with Aleene's Tacky glue.  The 2" washer was big enough to just hand hold, so I didn't glue it to a tongue depressor. 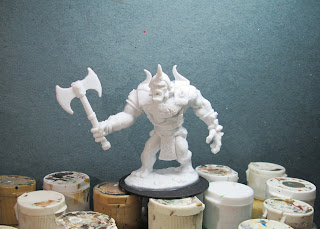 I began by painting the chainmail areas Black, and then drybrushing them with Ceramcoat "Metallic Pewter". I then painted the troll's body with Folk Art "Medium Grey", and then went back and painted his abdomen, chest, palms, and the sole of his raised left foot with the lighter Duncan "Slate Grey". 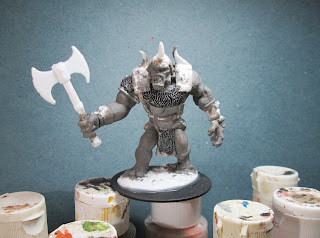 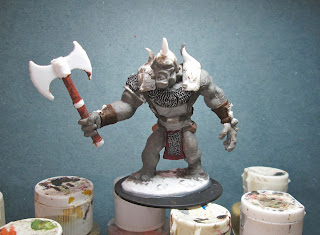 I had originally planned at this point to just paint all the metal parts with the "Metallic Pewter" and then give the figure a Black wash; but I had got to thinking about how (and whether) a troll would keep all his armor in such good shape, and decided instead to paint the armor in a more rusty way.  If I had thought of this at the beginning I would have done it first off; as it involves a lot of splotchy painting and drybrushing, which is difficult to do on and already painted figure and not get paint everywhere.  So, I attempted to do my best, and began by painting all the metal parts (even going back over the chainmail I had already done) with Ceramcoat "Walnut".  I then, with an old frazzled small brush, stippled and splotched Crafters Edition "Spice Brown" over all the metal areas that I had just painted with the "Walnut", trying to keep more towards the centers and along seams.  Next, I did the same, but to a lesser extent with Accent "Golden Oxide". 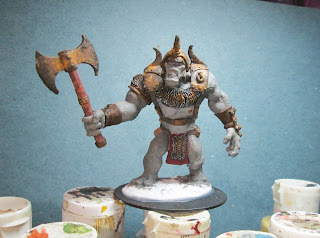 I then took some Accent "Princely Pewter" (which is darker than the "Metallic Pewter"), and carefully drybrushed all the metal parts.  Next, I went back with the lighter "Metallic Pewter" and did some very slight highlight drybrushing.   When this was done, I went back over the figure and fixed all the areas that my "rust effects" had gotten on, such as his skin, straps, and belts, etc. I then moved to his mouth, painting the inside with GW "Tanned Flesh", and his teeth with Americana "Buttermilk". Next, I painted his finger and toe nails with Folk Art "Grey Green". Lastly, I painted the rocks sculpted into the base with DecoArt "Storm Grey". 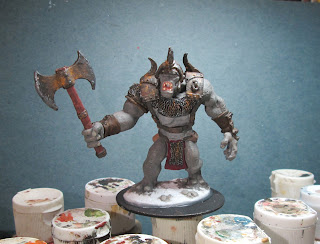 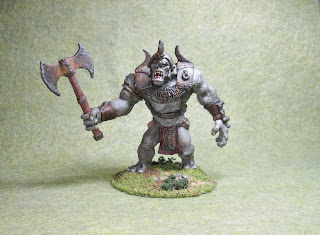 I'm really happy with this fellow.  I think he turned out looking suitably fierce and battle worn.
Posted by Chris Palmer