This past week I was still recovering from my cold, which decided to morph into bronchitis just when I thought I was getting better, so there were only a couple days that I felt really up to painting.  I decided to do a quick sci-fi figure to test out an idea I'd been thinking about, so I grabbed the female NOVA Corp figure.  I had been considering painting these NOVA figures in some sort of chameleon armor, so wanted to try painting them the same as I paint my usual rocky desert-like bases.  In other words, painting the figure and base as one.
I prepped the figure in the usual way; soaking it in a dish of water with a couple drops of dish- soap added, then giving it a light scrub with a soft toothbrush, and then rinsing and drying.  I then glued the figure to a 1" fender washer with Aleene's Tacky glue; and when that was dry, I gave the washer and figure's base a brush on coat of Elmer's white glue, and dunked it into a course sand mix.  My original idea was to spray the figure with Krylon Dark Brown Camouflage with Fusion spray paint, so that is why I didn't prime the washer beforehand.  I decided against the spraying, so in the future I think I will used black-primed washers for these.   When the sand mix had dried, I glued the figure to a tongue depressor with a couple drops of the Elmer's. 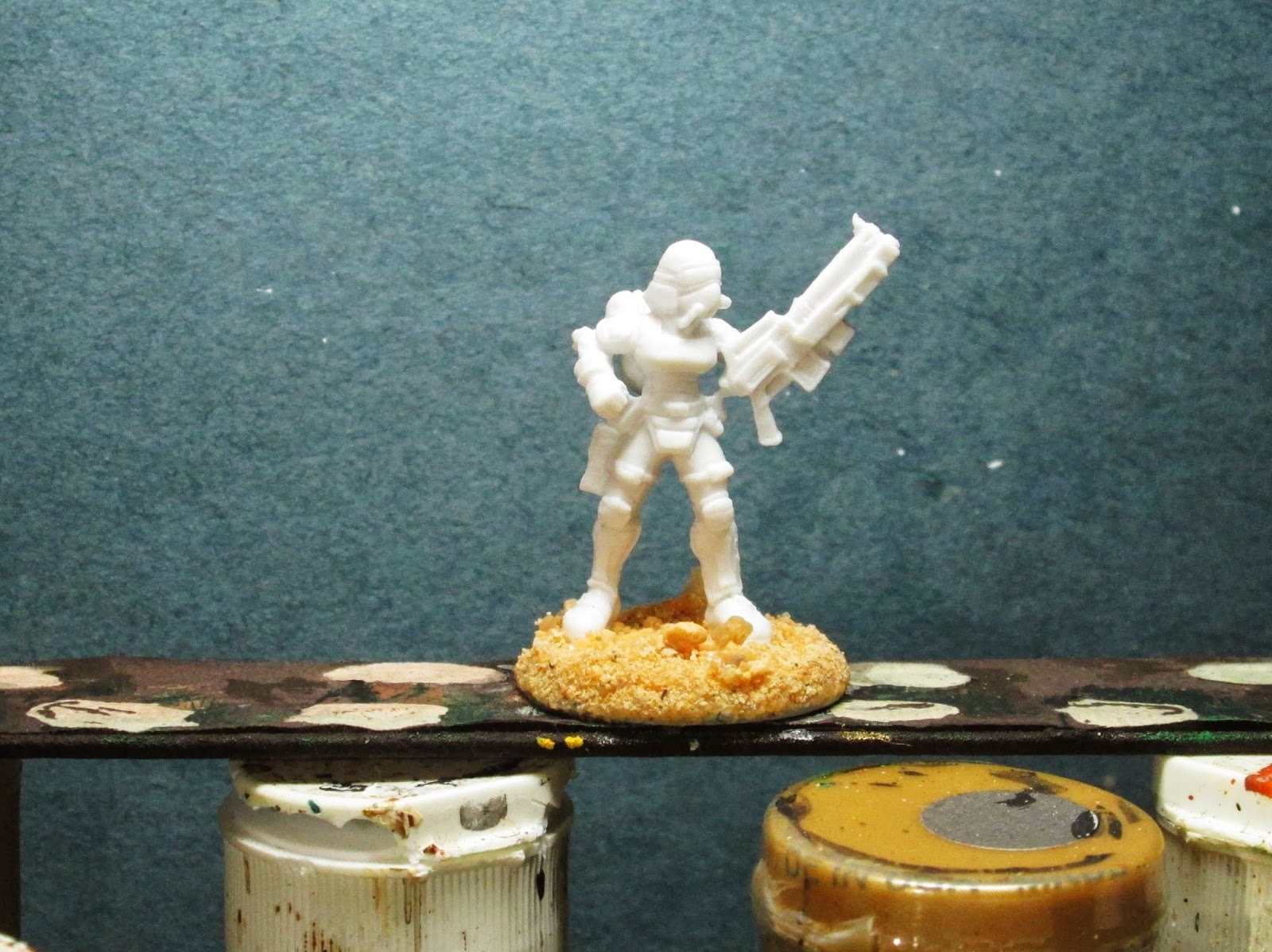 I began by painting the whole thing with Americana "Charcoal Grey". 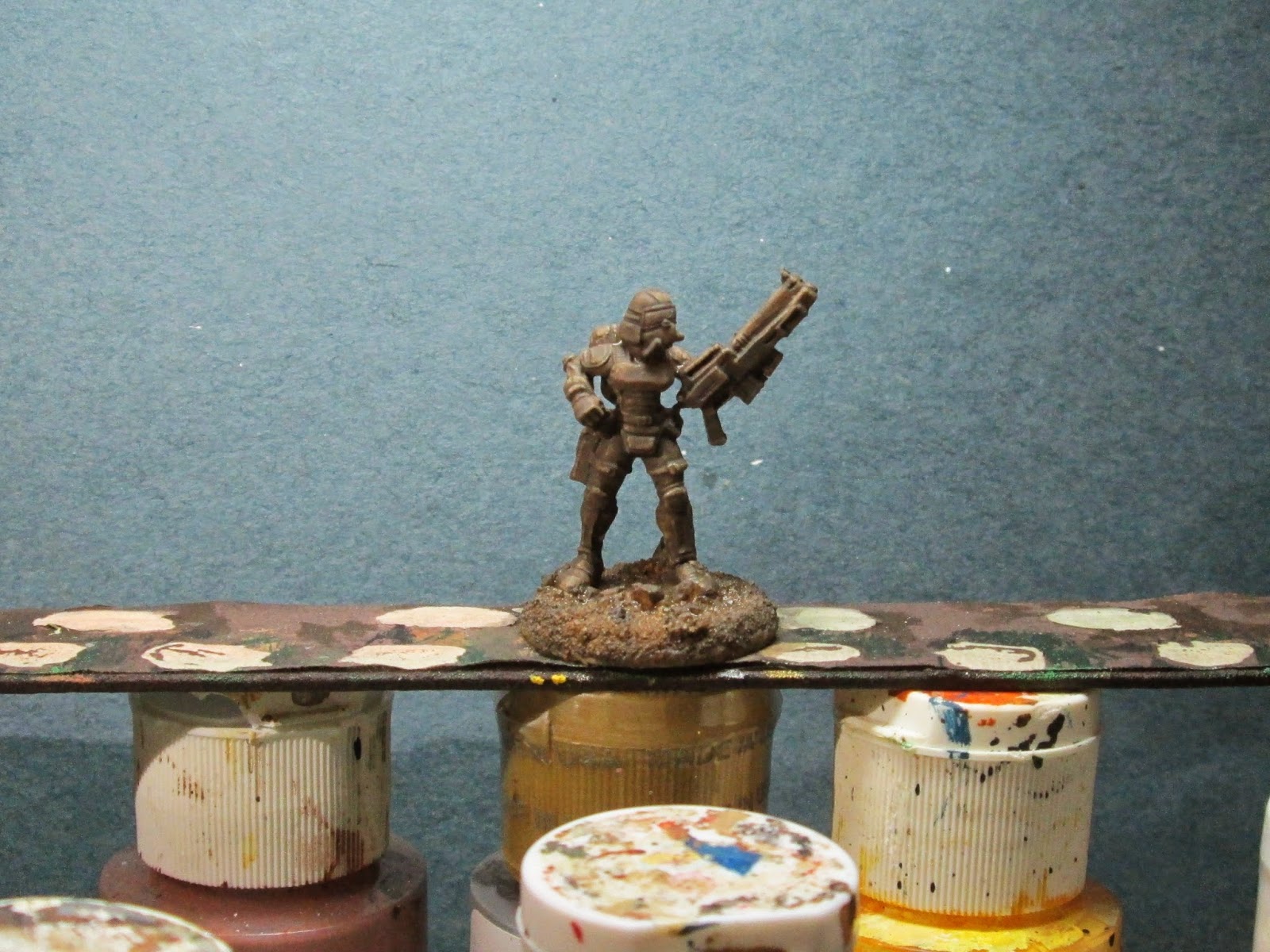 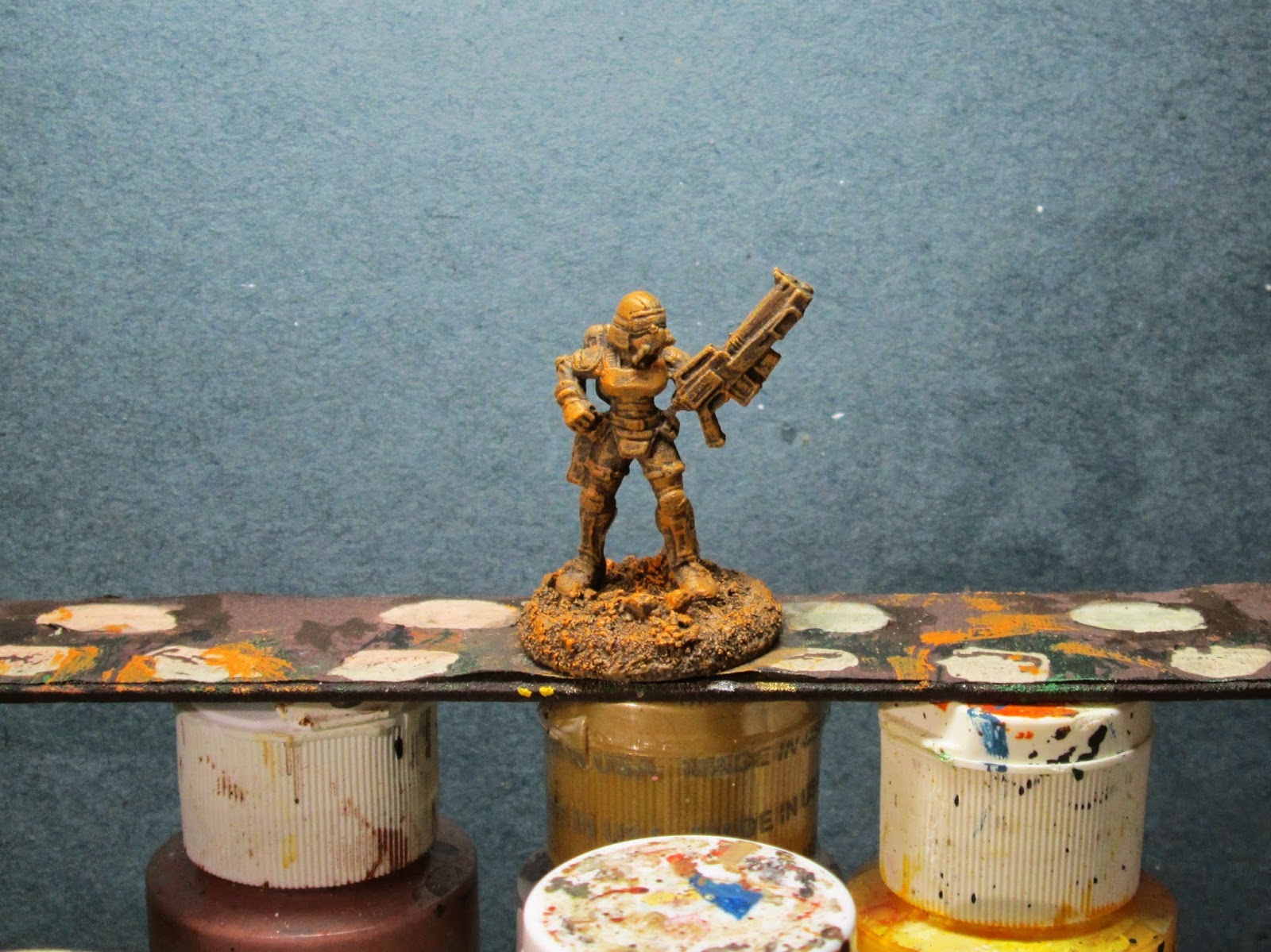 Lastly, I gave the entire figure and base a lighter drybrushing with Americana "Buttermilk".  I then worked on a little detail I had planned to add.  I planned to glue some purple alien-looking grasses to the base; so to help with the chameleon armor illusion, I gave a light drybrushing to her lower right leg, with a 50/50 mix of Anita's "Violet" and Apple Barrel "Apple Lavender", to look like the armor was changing to match the nearby grass.  I then moved on to paint her goggles with Accent "Real Umber", and added some small reflective light highlights with the "Buttermilk".  I then painted some of the assorted straps, breathing tubes, and ammo magazine with Folk Art "Butter Pecan".  Lastly I painted the gun's muzzle black, and a small insignia on her right shoulder with Folk Art "Tomato Red". 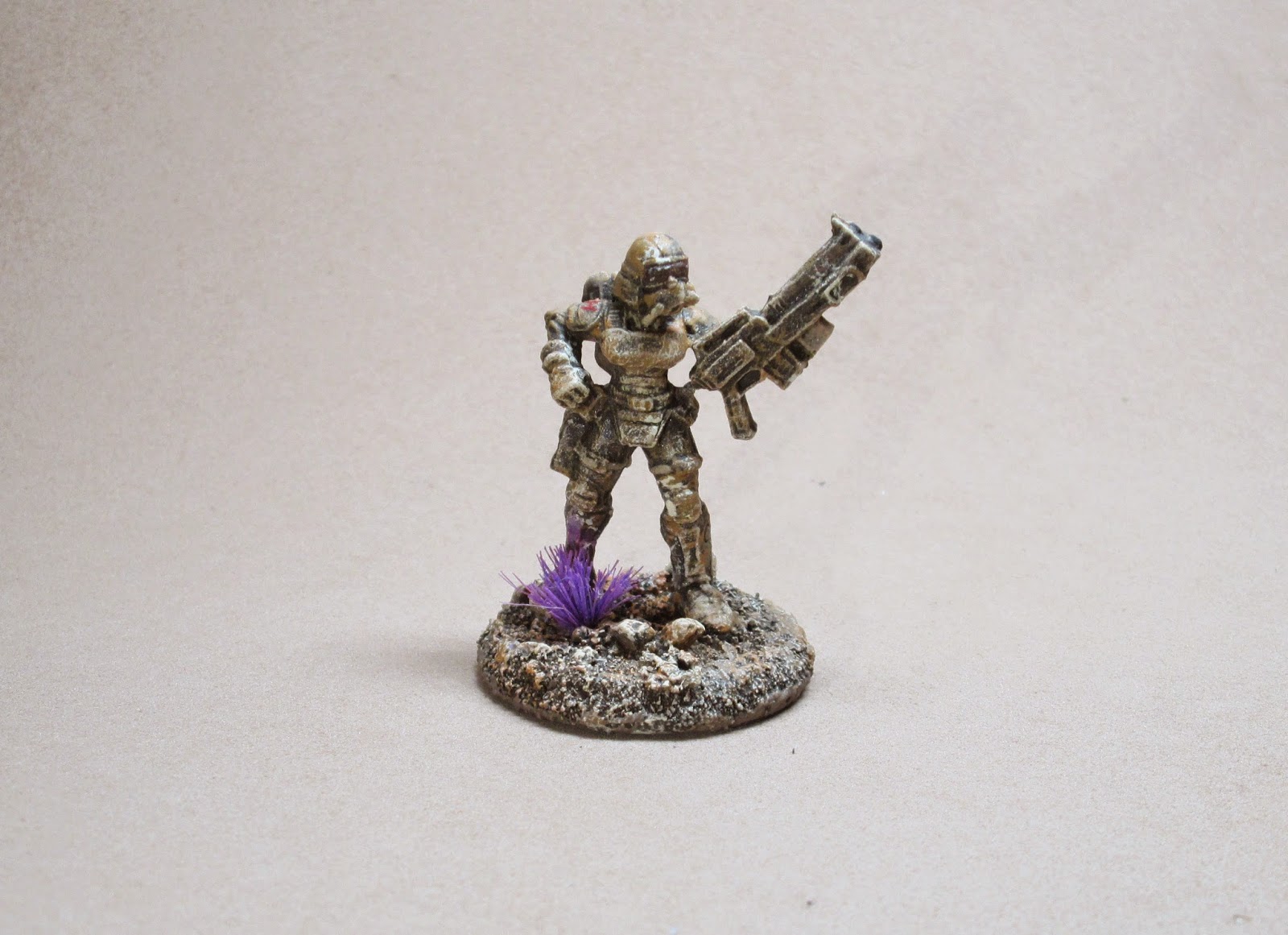 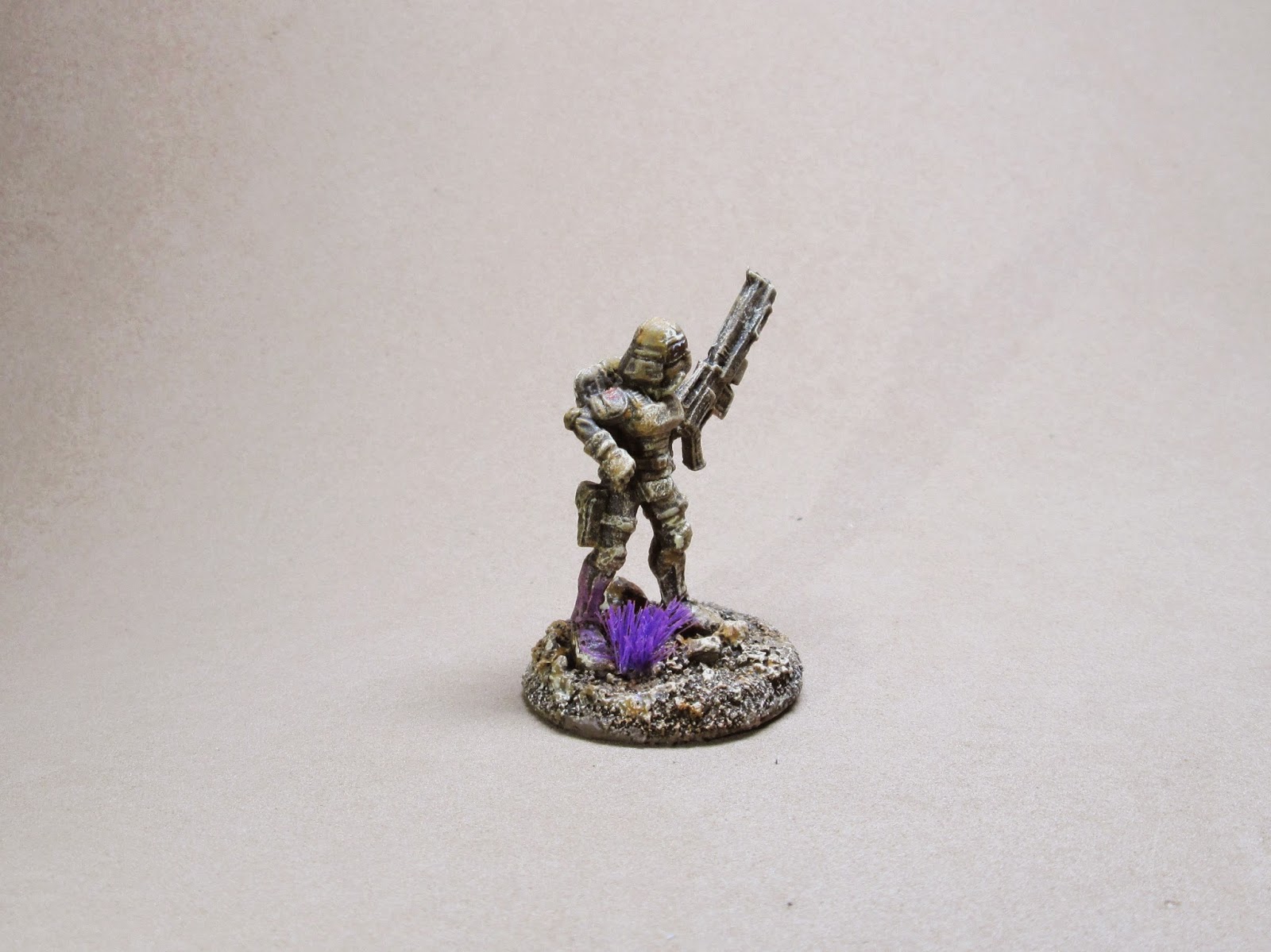 I'm really pleased with how this figure turned out.  I think the experiment worked, and I plan to paint the rest of the fireteam to match.