Another "Song of Blades and Heroes" Battle Day

My friend Rob Dean came over to my warroom this past Saturday for a couple games of "Song of Blades and Heroes" using our Bones figures.  I had set up the table with a little ford crossing a meandering creek in the shadow of an old Elven watchtower.
For my initial force I picked an all-human group consisting of; Magic User, Leader, Barbarian, Warrior, Elite Archer, Heavy Infantry, thief, and another Warrior.  Rob had a group of Orcs with  a Leader, supported by a pair of Orc Archers and some Giant Rats.
As the game started, I rushed for the hill where the old watchtower stood to get my Elite Archer and Magic user into good positions The Heavy Infantry tagged along to act as a bodyguard.   The rest of my forced moved to my right, to cross the creek a little up from the ford. Meanwhile, Rob marched his Orcs towards the ford in an attempt to quickly cross it, while his archers and rats moved to thwart my attempted flanking maneuver.  First blood came when my archer scored a lucky kill at maximum range on one of the Orcs approaching the ford. 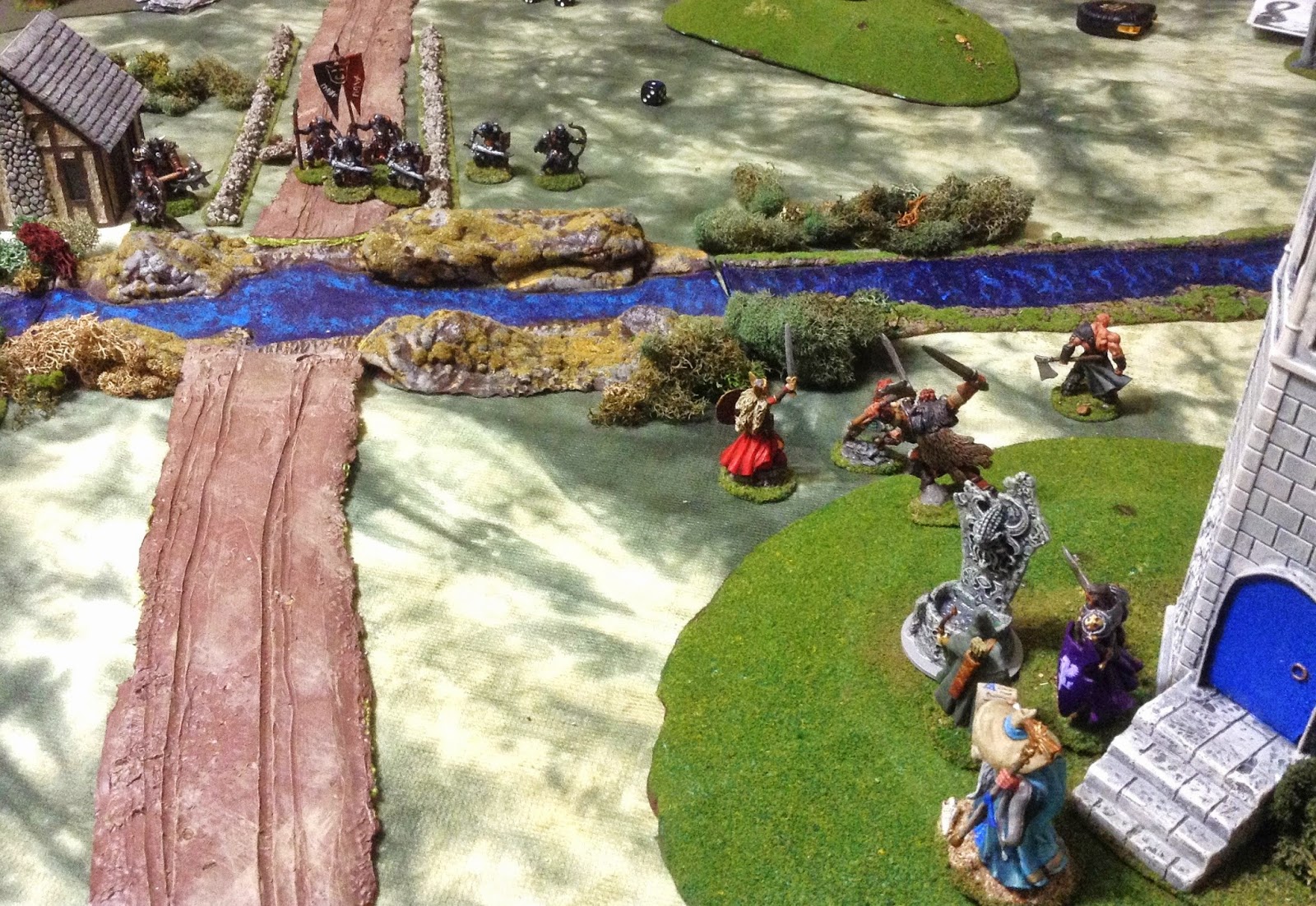 As Rob's first Orcs splashed across the ford, I turned my two Warriors back from their flanking maneuver to try and halt the Orcs before they got any further. Hopefully stopping them while they were still slowed down crossing the ford. Quickly, a swirling melee developed at the ford.
We both threw more troops at the ford, though I continued to advance my Barbarian around the flank.  Rob used his Rats to counter this move, and despite their reluctance to follow orders, two of the Giant Rats eventually made contact with my Barbarian and caused a Gruesome Death.  Luckily, hardly anyone was around to witness it, so there was little lasting effect for my side.  While my Archer remained on the hill, trying to take pot shots at the Rats who had killed the Barbarian, my Magic User moved down to get in better range of the ford bringing the Heavy Infantryman along with him.
In the end, the Orcs' lower Quality told, and I was able to wear them down one by one, while only losing my Thief and Barbarian in the process.   After Rob's Orc's dropped below 50%, causing several of the survivors to run a ways down the road, we called it a game.
For the second game we rolled for a scenario, and got the Place of Power result. So, we quickly reset the table, removing the Elven Watchtower and the river. In the Watchtower's place I put out the Bones Sarcophagus and threw some Armorcast cemetery walls around it. We decided it must be a powerful magician's grave, which inspired my to pull out my Bones High Wizard statue to put up by the sarcophagus. After a quick rearrangement of the woods, we were set to go.
I picked a more mixed-race adventuring party for this game, featuring: a  Halfling Warrior (not a Bones figure), Halfling Wisewoman, a Dragonman (I used the Hyenaman stats), Human Warrior, Human Leader, Fire Elemental, Elf Sneak, and Elf Elite Archer.  Rob used what I call his "invincible force", since I have yet to beat it in a number of games now.It consists of an assortment of human types; including a Leader, Warriors, Barbarian, Archers, and Magic user
Things got off to bad start for me as on the first turn Rob did a group activation and successfully rolled 3 dice, allowing most of his force to run and gain the Place of Power before I had even picked up a die.  I did my best to rush my force forward before Rob's force could get settled.
With their Quality 4 and 5,  the Halflings proved to be useless, especially after I had had to rush my Leader forward to throw more bodies into the fray.  I have yet to have success with low quality troops.  Even my high quality troops preformed poorly on this outing.  My Elite Elf Archer couldn't hit anything, and my brave Dragonman was knocked down with the first blow he received; and on the following turn was dispatched Gruesomely, causing many of my forces' survivors, who had rushed forward to help the Dragonman, to recoil backwards a move or two.
It wasn't long before I was worn down to below half; as the dice were unkind and I could not get any coordinated attack put together.  With Rob's forces well entrenched in the walled Place of Power, at this point we called it a game.
Another good gaming day, and a nice victory for each of us.  We both still struggle to find the correct way to use low Quality troops to advantage.  Hopefully we can have a rematch soon.
Posted by Chris Palmer