This week I painted the Kord the Destroyer figure from the Fighters Set.   This wraps up the four-figure Fighters Set, and it joins the list of finished sets over in the right-hand column.
Let me just say that this was my least favorite figure from the Kickstarter to paint so far.    It had several strikes against it going into the painting process, and if it hadn't been for my being determined to paint every figure, I may have tossed it in the flea market box.  First, as can be seen in the photo below, the fur cape comes pre-glued to the figure making a large portion of the back of the figure very hard to access for painting.  Also, as I have complained about with some Reaper figures before, there were just too many layers of clothing, padding, and armor on this figure, making it difficult to 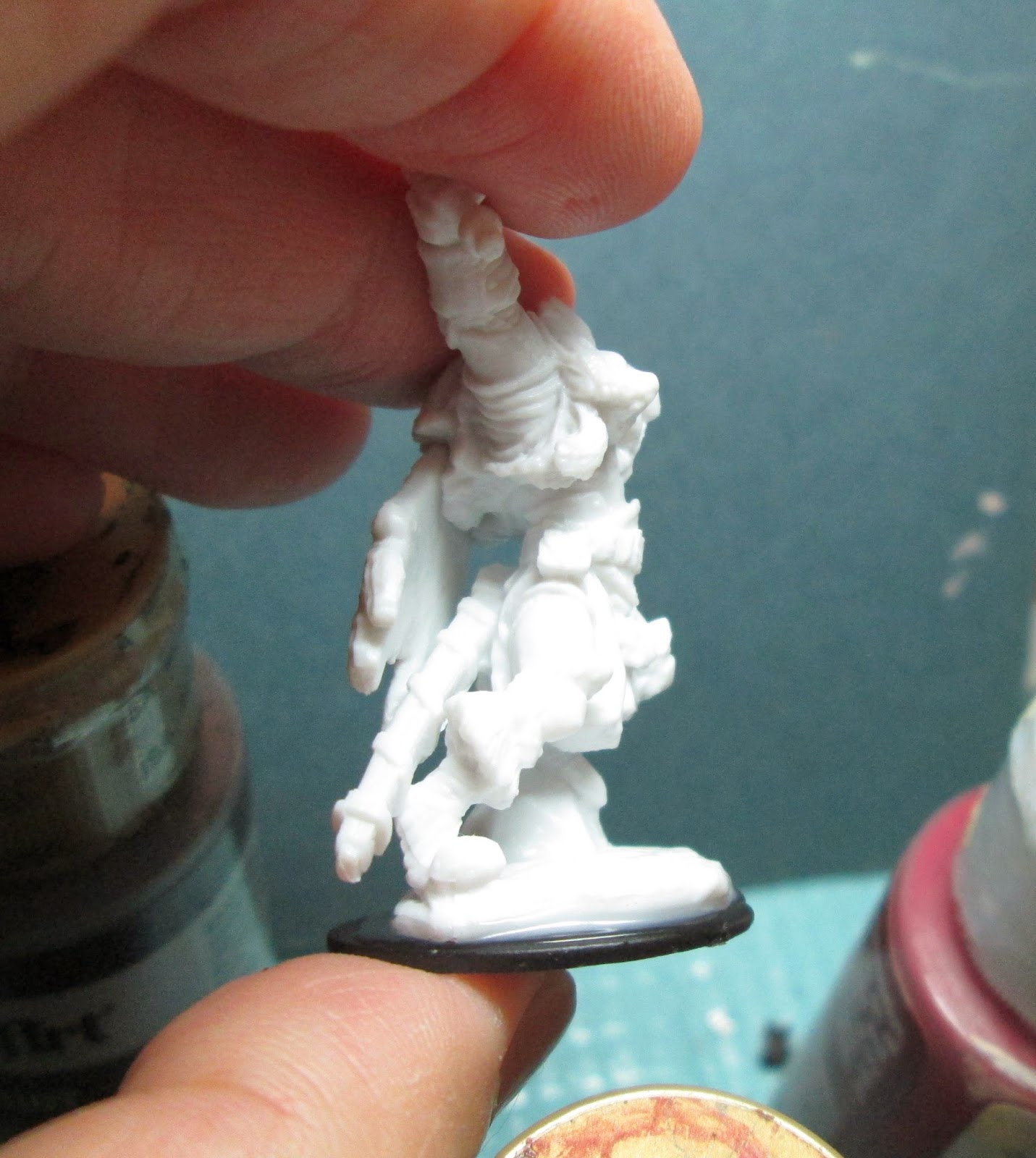 figure out what was what.  To make matters worse, it seemed there was clothing on the left of the figure that didn't match what was on the right, and vice-versa. And where do his sleeves come from, when he isn't wearing a shirt?
So, getting down to business,   I prepped this figure in the usual way; soaking it in a dish of water with a couple drops of dish soap added, then giving it a light scrub with a soft toothbrush, and then rinsing and drying.  I then glued the figure to a 1" black-primed fender washer with Aleene's Tacky glue, and glued the washer to a tongue depressor with a couple drops of Elmer's White Glue.
I then gave the figure a wash with some thinned black ink with a little pinhead drop of dish soap added, to help bring out the details on the figure. Since I did not particularly care for this figure, my painting descriptions are going to be a bit shorter than usual. 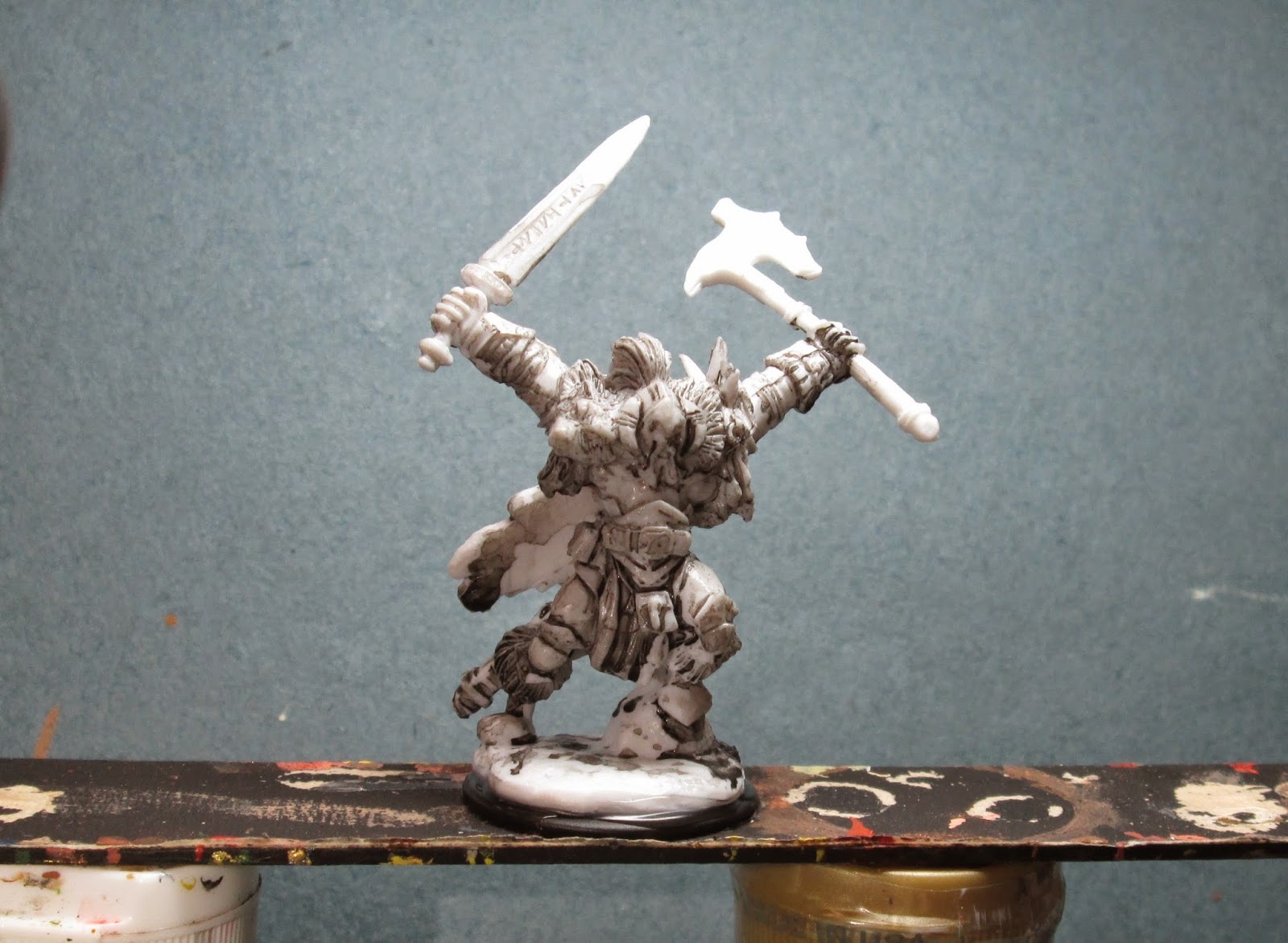 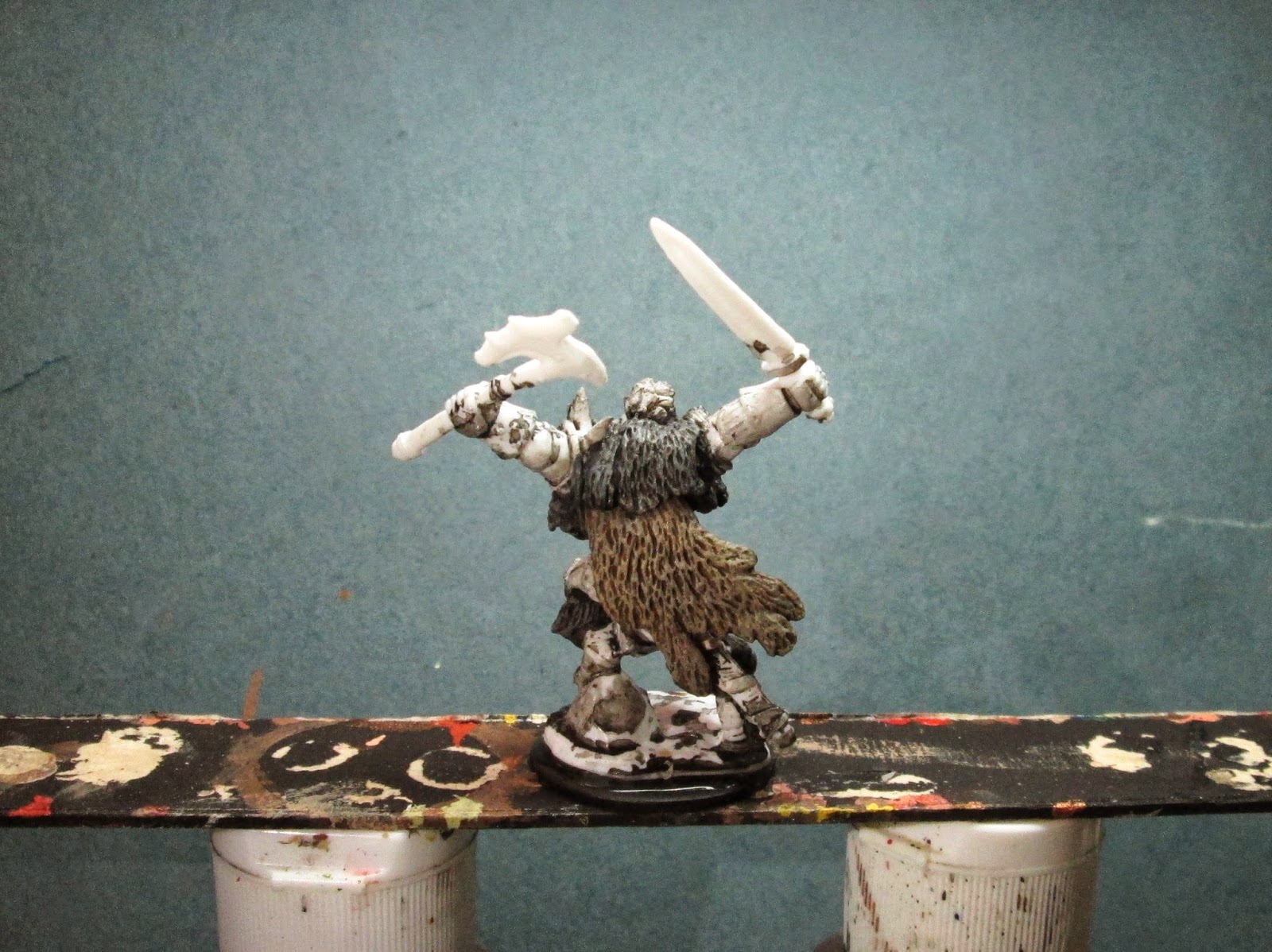 Next, I painted his skin with Americana "Shading Flesh", and his loincloth Apple Barrel "Apple Maroon".  His boots I painted Americana "Charcoal Grey".  I then painted his various sleeves, and the other garments at his waist, various brown shades. 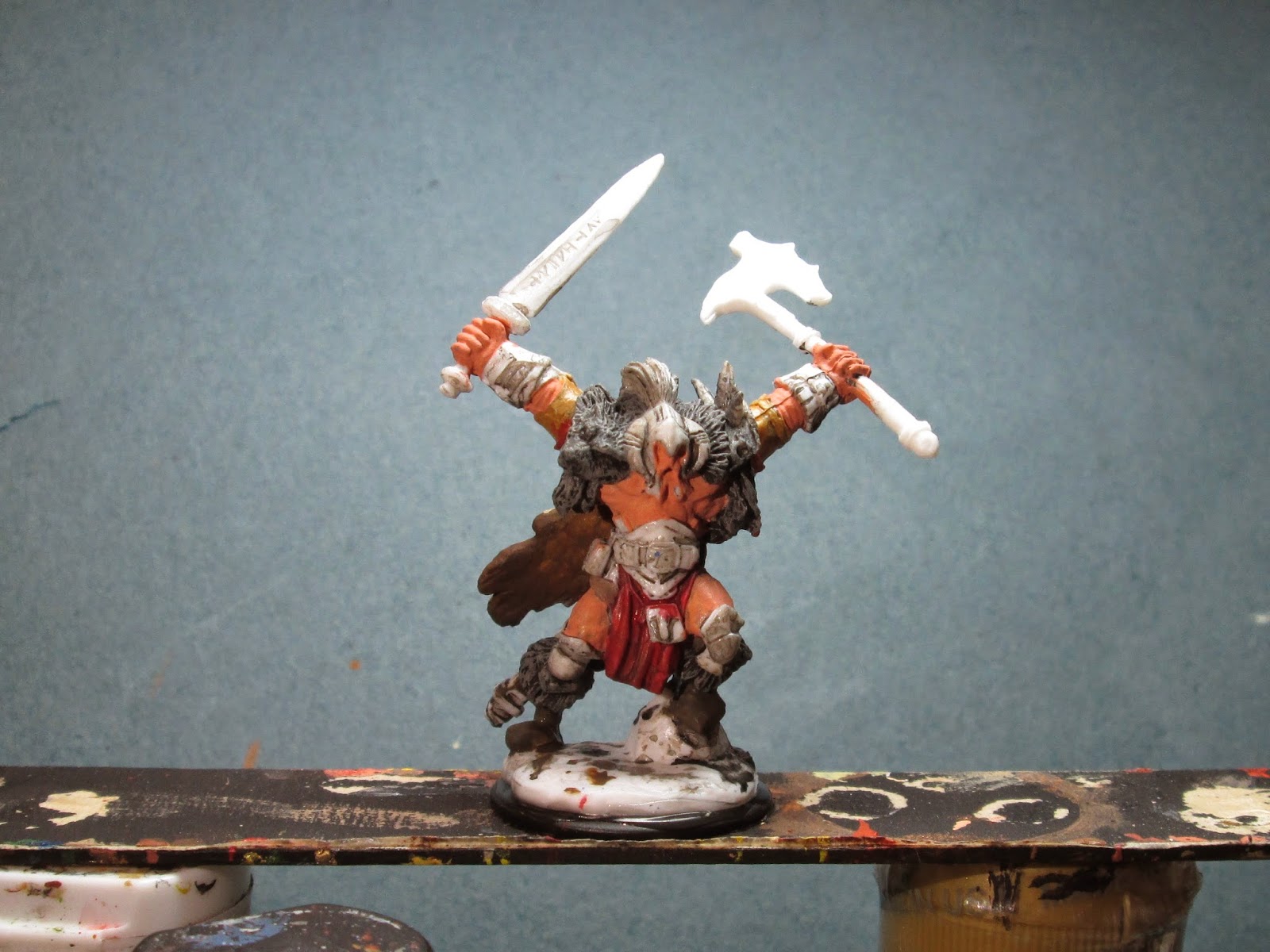 I then moved on to painting his belts, wrist guard things, scabbard, pouch, and the handle of the ax, and grip of the sword more shades from my brown paints collection. His hair I painted Anita's "Burnt Sienna", and the horns of his helmet Americana "Buttermilk". 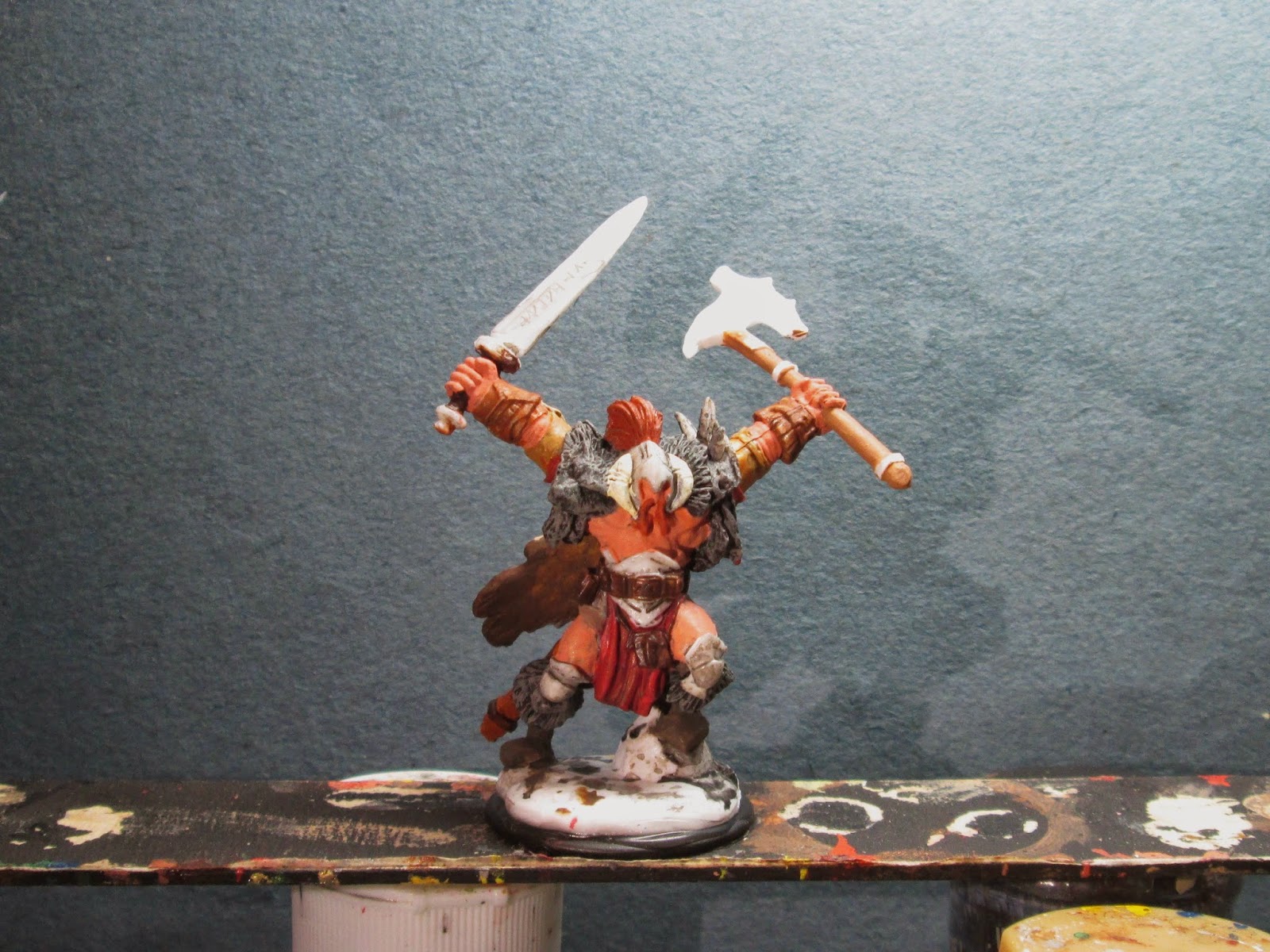 Next, I painted the rock he is standing on with the "Medium Gray".  Then I did all the armor, weapons, and buckles with Ceramcoat "Metallic Pewter". 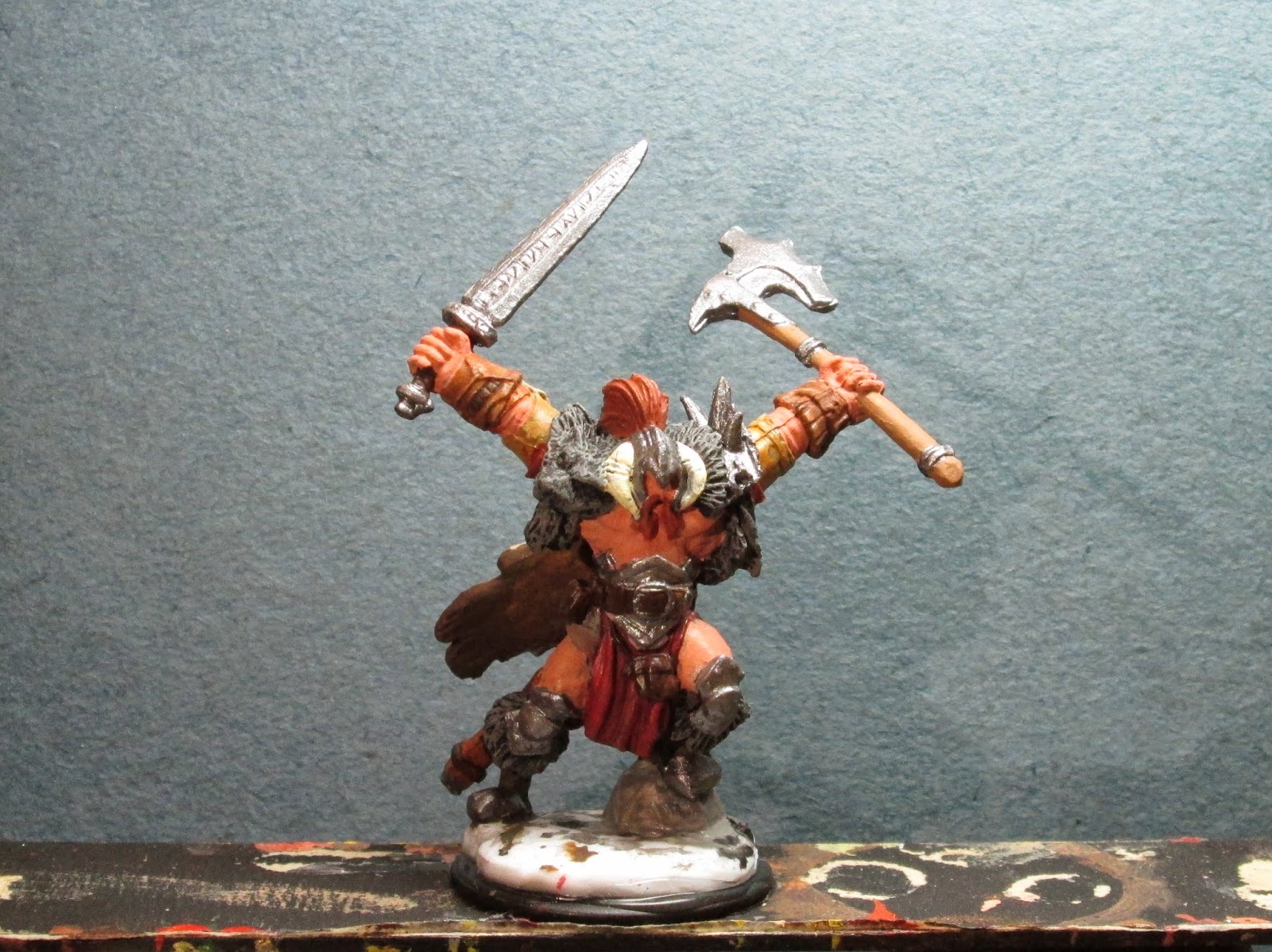 After I had let everything dry for a good while, I gave the entire a figure a wash with thinned GW "Agrax Earthshade" wash. 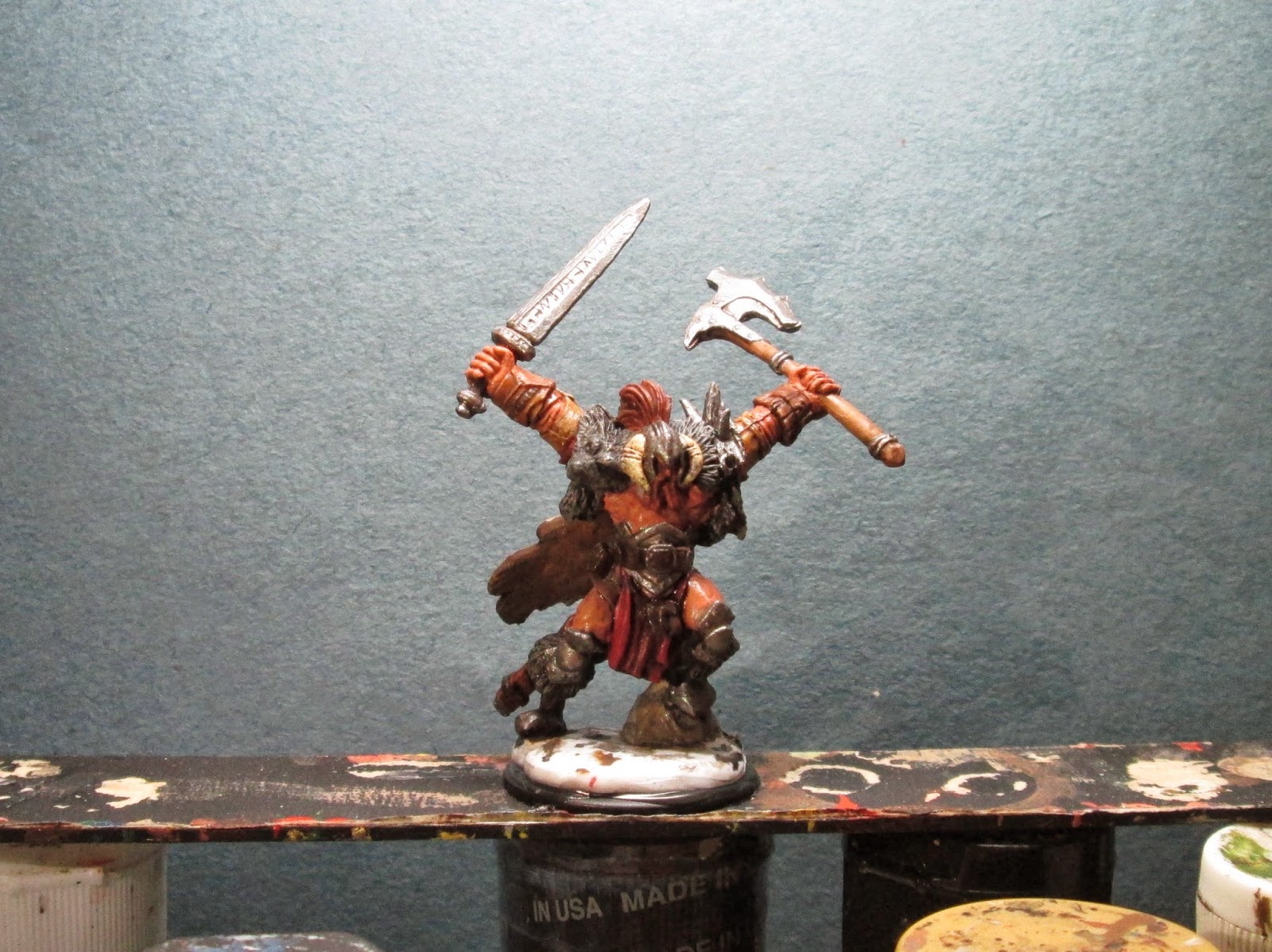 When the wash had had a long time to dry, I went back and added highlights to the figure, using mainly the base colors I had used.  I highlighted the hair with Americana "Georgia Clay", and the rock he is standing on with Duncan "Slate Grey".  The metal parts I highlighted with Folk Art "Silver Sterling".  I also painted a black nose and eyes on the wolf cape.
I let the figure sit all day, and the later that eveing I gave it a coat of Ceramcoat "Matte Varnish".  The next morning I flocked the base, and later that afternoon I sprayed it with Testor's "Dullcote" spray varnish. 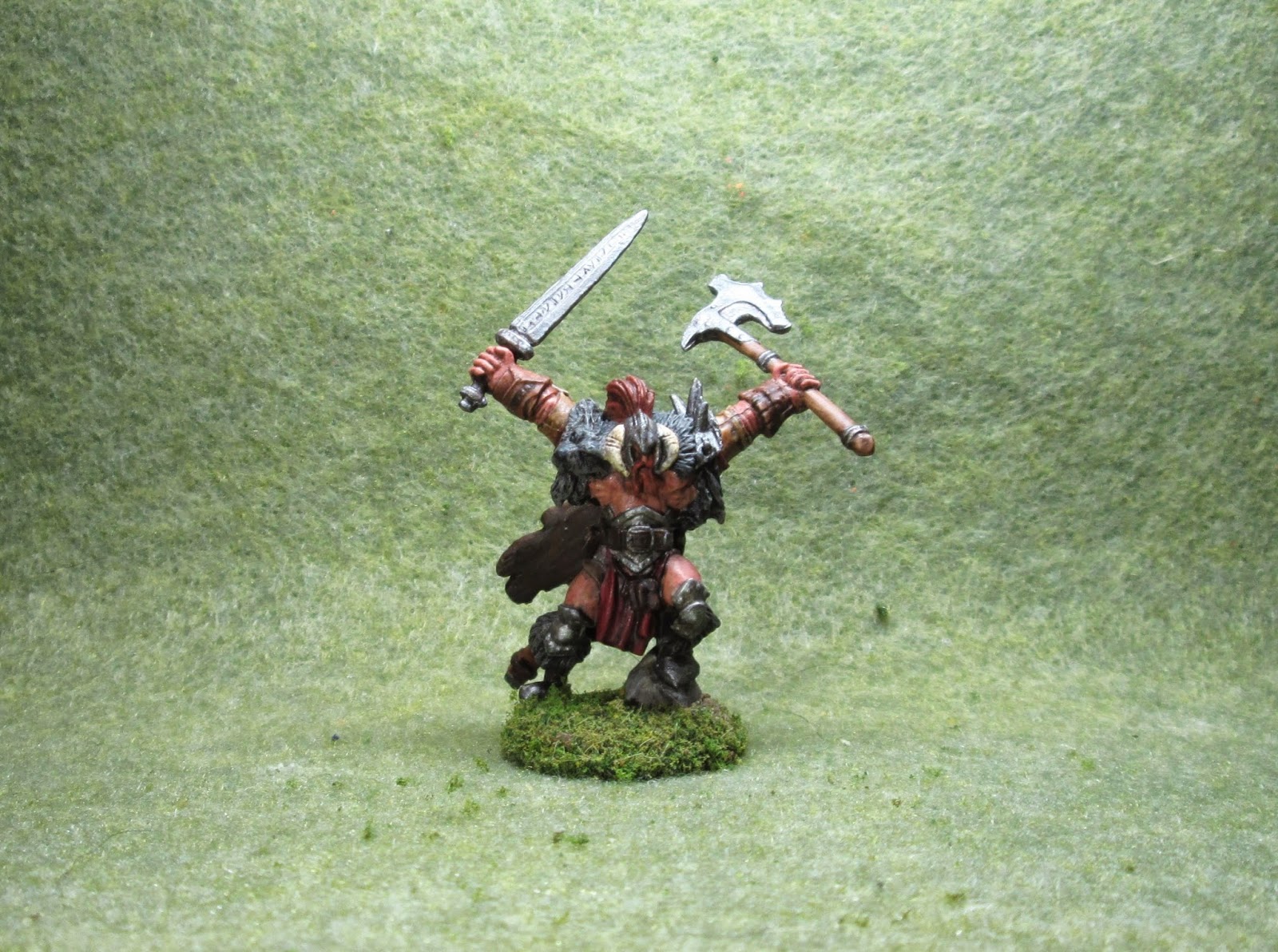 Despite all my fussing, I don't think the figure turned out that badly.  As long as you view the figure as a whole and don't start to try to decipher all the details, it's a good result.
Next up on the painting table will be the Big Bad Evil Guys (BBEG) Set!