This past week I painted the Jakob Knochengard figure from the Bones 4 Dreadmere Epxansion set.
I prepped the figure in the usual way, soaking it in a dish of water with a couple drops of dish-soap added, then giving it a light scrub with a soft toothbrush, and then rinsing and drying it.  I then glued the figure to a black-primed 1" fender washer with Aleene's Tacky glue, and then glued him to a tongue depressor with a couple drops of Elmers glue. 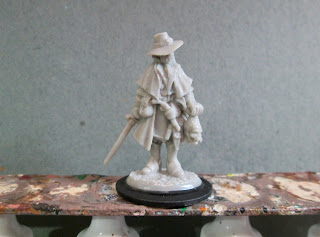 I began by painting his face with Americana "Shading Flesh" and his outfit with Reaper MSP Bones "Cinnamon Red".   I then painted his coat, hat, and boots, with Ceramcoat Black; and then his pants, the mail under his coat's cape, and his sword, with Americana "Zinc". 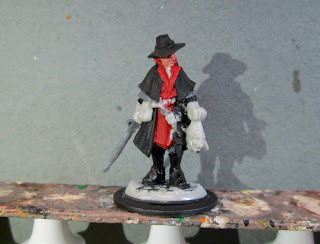 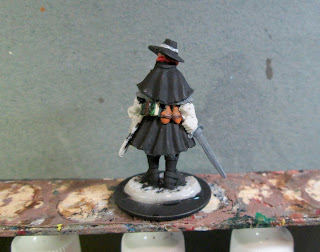 As I began to figure out (or guess at) what everything was, I got the "Zinc" out again and painted his scabbard, the metal parts of his pistol, and what is either another gun barrel or another scabbard, half under his coat.   I then painted the stock of his pistol with Americana "Light Cinnamon", and his hair with Nicole's "Brown". After that, I painted the zombie head with Americana "Reindeer Moss", and its hair with the "Black".  I then got out some Apple Barrel "Apple Maroon", and mixed that with some of the "Black" to pat the gore around the head's neck and mouth.  I followed this by  painting his badge, cross, and the amulets(?) hanging from his coat with Accent "Mustard Seed". 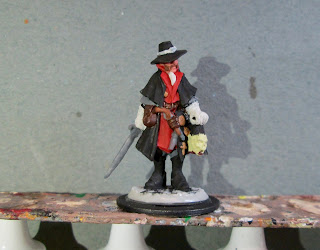 I then  painted the sword, leg armor, and the chain mail on his shoulders, with Ceramcoat "Metallic Silver".  Next, I painted the scabbard and the metal on the pistol with Folk Art Metallics "Gunmetal Grey", and the badges, amulets, and cross with Ceramcoat "14K Gold".    Then after everything had time to dry, I gave the entire figure a wash with Citadel "Nuln Oil" wash.   When the wash was dry, I highlighted his face with a mix of Crafter's Acrylic "Flesh" with the base "Shadow Flesh", and I highlighted his hair with some Ceramcoat "Territorial Beige".  After that, I highlighted his red clothing with some Crafter's Acrylic "Orange Spice". 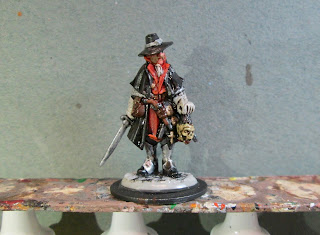 Next, I highlighted his cloak and hat with first some of the "Zinc", and then a little of some Crafter's Acrylic "Storm Cloud Grey".  I then highlighted his gauntlets and hat band with Americana "Snow White", and his belt and pouches with Americana "Sable Brown".  I painted the buckle on his belt and hats with the "Gunmetal Grey", and highlighted all the silver metal with the "Metallic Silver".  I highlighted the gold metal with some Ceramcoat "Wedding Gold".  I then highlighted the book cover with some Crafter's Acrylic "Holiday Green", and added some gilded decoration to it with the "14K Gold".   After that, I did some highlights on his boots and the hair of the severed head with some Citadel "The Fang", and I painted the eyes on the severed head with Americana Moon yellow".  I highlighted the head with the base "Reindeer Moss".  Lastly, I painted the entire base with "Americana "Mississippi Mud".
I let the figure dry overnight and the next day I gave it a coat of Americana "DuraClear Matte" varnish.    Then, when  the varnish was dry, I used some white glue to flock the base.  Another overnight dry, and I sprayed it with Testor's "Dullcote". 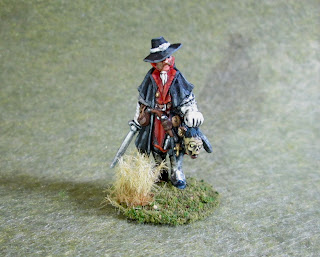 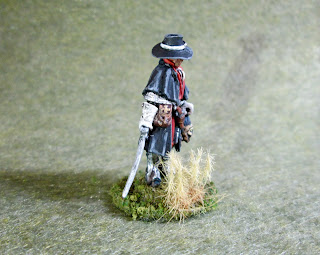 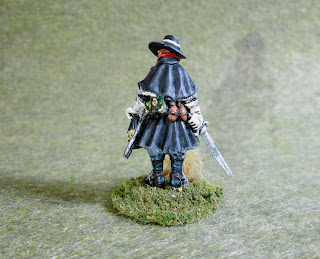 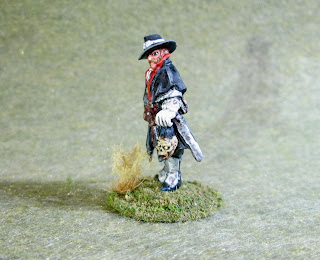 This is a great sculpt and really full of character.   It was a fun one to paint, and I''m happy with how it came out.
Posted by Chris Palmer