This past week I painted the Female Devil figure from the Bones 4 Bedeviled group from the Core Set.   During the run of the Kickstarter, I had read on the Reaper Forum about folks who where considering the possibilities of  converting the larger Rulers of Hell figure set into some sort of Forest King and Queen creatures by removing their wings and skull iconography.   With the cloven hooves and horns I could see how easily this could be done.  And, while I didn't get that set, I did get the smaller sized Bedeviled group that came in the Core Set.  Looking at the female figure in that set, it seemed to me that she too would be an easy conversion to make into some sort of Faun-like Forest Creature. 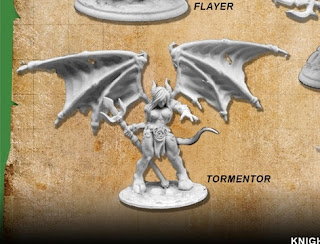 So, with figure in hand, I began.  I prepped the figure in the usual way, soaking the parts in a dish of water with a couple drops of dish-soap added, then giving them a light scrub with a soft toothbrush, and then rinsing and drying them.
The first conversion step I wanted to do was remove the trident-like weapon from her right hand.  Once removed, I replaced it with one of the spear/staff type weapons weapons from the Bones 3 Clear Armory of Virtue sprues.    I then glued the right arm into place using Gorilla Superglue Gel. 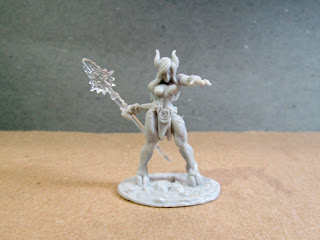 The figure had three holes in her back; the top two for wings, and the bottom for her tail.  Next step was to fill these. 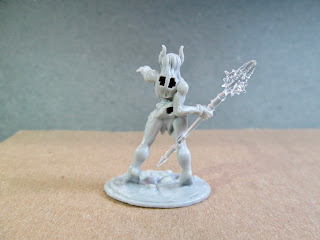 So, using some 2-part epoxy putty greenstuff, I filled in the top two holes by sculpting in the missing hair; and I filled the bottom hole by sculpting her a more Faun-like tail. 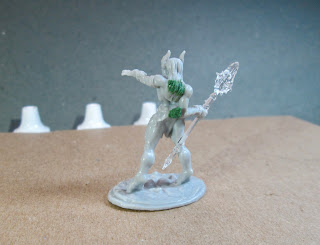 I then glued the figure to a black-primed 1.5" fender washer with Aleene's Tacky glue, after trimming the base so it would fit. I then placed the figure in my painting grip. 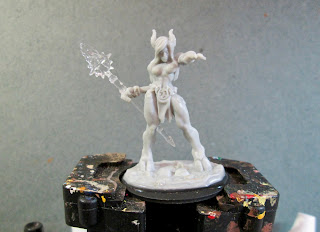 I began by painting all her skin above the waist with Reaper MSP "Tanned Shadow", and her legs with Americana "Light Cinnamon".  I then painted her loin cloth with Crafter's Acrylic "Forest Green", and the underside of her tail with Americana "Fawn". 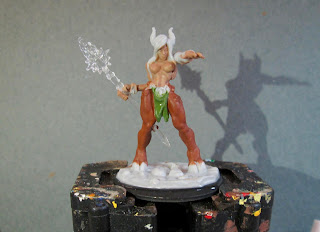 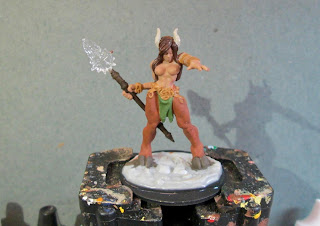 I decided I wanted to add a little color to her loincloth, so I gave it a border with Apple Barrel "Yellow".  I then painted her belt buckle and fittings, as well as her wrist guard and the fittings on her staff, all with Folk Art Brushed Metal "Brushed Bronze".   I let everything dry for a while, and then I gave the entire figure (except the clear end of the staff) a wash with Citadel "Agrax Earthshade" wash.  When the wash was dry, I painted her eyes, and gave her some Folk Art "Metallic Emerald Green" eye shadow.  I then highlighted her skin with the base "Tanned Shadow" mixed with some Reaper MSP "Tanned Skin", and Reaper MSP "Tanned Highlight". 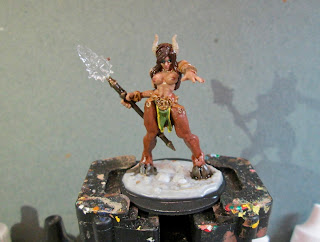 I then highlighted her hair with some of the "Light Cinnamon", and then some Folk Art "Teddy Bear Brown"; and, next, I used these same two colors to highlight her legs.   After that, I highlighted her loin cloth with Folk Art "Hauser Green Medium", and the border with Crafter's Acrylic "Bright Yellow".  I then highlighted her tail and her horns with some Crafter's Acrylic "Light Antique White", and her hooves with a mix of some Americana "Mississippi Mud and the base "USA Olive Drab".   Next, I highlighted her belts and arm bands with some Accent Golden Oxide, and then a little of the "Golden Oxide mixed with some Ceramcoat "Maple Sugar Tan".  I wrapped up the highlighting by doing her staff with Folk Art "Dark Brown", and the metal fittings on her belt, staff, and her wrist guard with Ceramcoat "14K Gold".  Lastly, I painted the head of the staff with Tamiya Color "Clear Green", and the whole figure base with the "Mississippi Mud".
I let the figure dry overnight and the next day I gave it a coat of Americana "DuraClear Matte" varnish.    Then, when  the varnish was dry, I used some white glue to flock the base.  Another overnight dry, and I sprayed it with Testor's Dullcote".  After the Dullcote dried, I went back over the head of the staff with Americana "DuraClear Gloss Varnish". 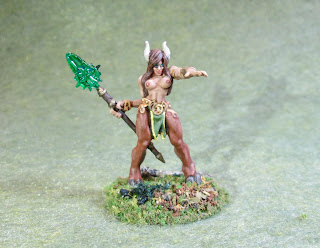 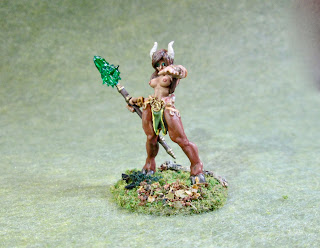 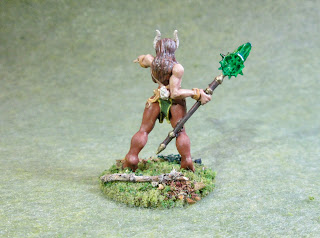 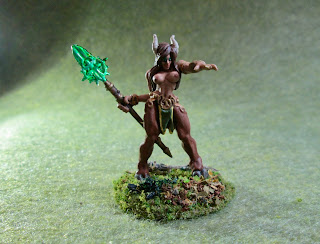 I really am pleased with how the conversion from demon to forest queen worked out on this, as well as the paint job.  And it was quite a nice sculpt to begin with as well.

Be sure to tune in Thursday for another bonus post this week!