This past week, I returned to the Bones 3 Townsfolk set, and worked on the Dwarven Butcher.  As I looked at the figure, I realized I didn't like how he was holding his cleaver up in the air as if poised to swing it down and  slice the throat of his little buddy next to him.  I decided to reposition it into a more benign position.
So, after soaking the figure in a dish of water with a couple drops of dish-soap added, then giving it a light scrub with a soft toothbrush, and then rinsing and drying it; I carefully cut the contact point where the cleaver meets the hat, and then cut the arm at the elbow.  Next, I glued it on in the reverse position, so it looked more like he was resting the cleaver on his hip.   There was slight gap left in the top of the elbow, which I filled with a little gel superglue. 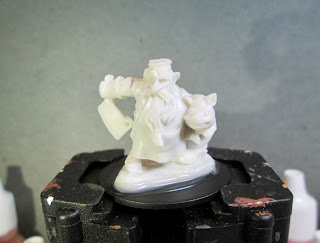 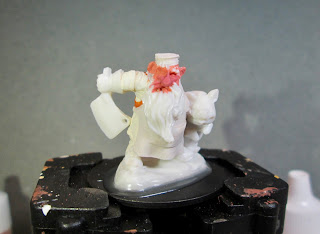 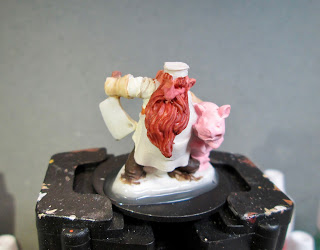 After everything had time to dry, I gave his face , and the pig, a wash of Citadel "Reikland Fleshshade" wash.   When that wash was dry, I then gave a wash to all his clothing, and beard, with Citadel "Agrax Earthshade" wash.    When that was dry, I painted his eyes, then highlighted his face with a mix of the base "Shading Flesh", and some Crafter's Acrylic "Flesh".   I tried to add some of the "Black Cherry" in when I highlighted his nose, but in the end realized there's not enough of the rest of his face showing to really see the difference (His face is all nose, eyes, and hair!)
Next, I worked on highlighting his beard and eyebrows, using first Crafter's Acrylic "Orange Spice", and then a bit of Americana "Tangerine". 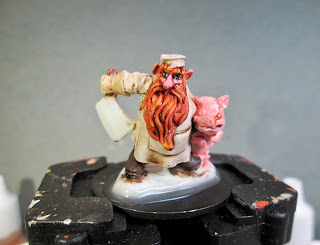 Next, I highlighted his tunic with Crafter's Acrylic "Light Antique White", and I highlighted his apron and hat with Americana" Snow White".  I then went over the pig with a half stippling, half drybrushing coat of Accent "Soft White" in an effort to represent the course white hairs I saw on most photos of pigs I Googled.   After that, I highlighted his gloves with Americana "Antique White", and highlighted his vest with a mix of the base Terra Cotta" and some Apple Barrel "Apple Maple Syrup".   I highlighted his boots next, with some Crafter's Edition "Spice Brown", and the handle of the cleaver with the base "Teddy Bear Brown".  I then painted the cleaver with Americana "Zinc; and when it was dry, painted over it with Folk Art Metallics "Gunmetal Grey", and then highlighted it with Ceramcoat "Metallic Silver".
When I was done painting the figure, I used some white glue to glue some fine brown sand to the base.  When the sand was dry, I painted it with a coat of Americana "Raw Umber". When this was dry, I drybrushed the sand with the "Territorial Beige", and then with some Folk Art "Butter Pecan"; lastly I drybrushed it with a little of the "Light Antique White".
I let the figure dry overnight and the next day I gave it a coat of Americana "DuraClear Matte" varnish.  When dry, I glued on some bits of grass tufts.   Another overnight dry, and I sprayed it with Testor's Dullcote". 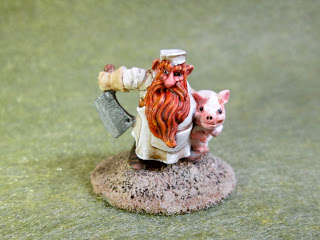 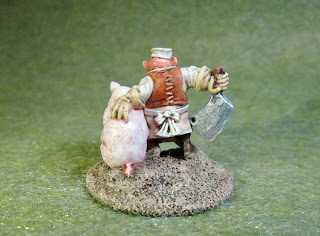 I'm real happy with how this guy turned out; particularly the white on white clothing.   I'm not so happy that as I was painting I realized just how cartoonish the sculpt was (and the brewer I did a couple weeks ago).  The face, particularly the giant nose, and the eyebrows sculpted onto the hat, do not make for a very realistic dwarf.   I thinks these are trying to be too GW like.  Having painted some of the new Oathmark plastic dwarves recently, it's much nicer when they're sculpted realistically.
Posted by Chris Palmer