This past week I got back to working on my all-Dwarf warband for Frostgrave, and painted Hagar, Dwarven Hero, from the Bones 3 Dwarves Set.  I had converted this figure a while back, as part of a trio of Bones 3 Dwarves I converted for an all-Dwarf warband for Frostgrave, by replacing one of his axes with a crossbow and adding a quiver of bolts, both from the Frostgrave Soldiers plastic figure set from Northstar.

I had originally planned to start working on this figure a while ago, and had glued it to a craft stick, but then it got back-burned for other projects.  When I decided to get back to it last week, I popped it off the stick and put it in my painting grip. 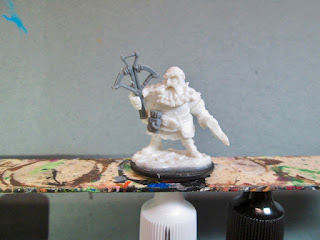 I began by painting all the armor Black.  Then, when the Black was dry, I drybrushed the armor with  Folk Art Metallics "Gunmetal Grey", and then passed over it with a lighter drybrush of Ceramcoat "Metallic Silver".  After that, I painted his face with Americana Shading Flesh. 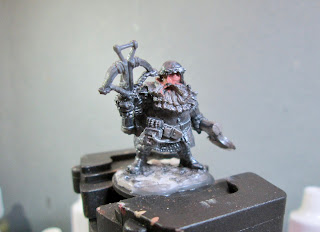 Next, I painted his beard with Reaper MSP "Turkey Brown", and then did his belts, straps, shoes, and quiver with Americana "Raw Umber". I also painted the pouch on his back with Ceramcoat "Territorial Beige", and his pants with Apple Barrel "Apple Maple Syrup". 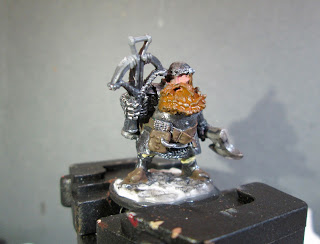 I then painted his crossbow and axe handle, with Crafter's Acrylic "Cinnamon Brown", and then painted the crossbow rope with Americana "Antique White".  After that, I painted the quarrel fletchings with Americana "Dove Grey", and the fang(?) on the quiver with Americana "Bleached Sand".  When all that was dry, I gave all the non metallic parts, except for his face, a wash with Citadel "Agrax Earthsahde" wash. I then went back and applied some Citadel "Reikland Fleshshade" wash to his face. 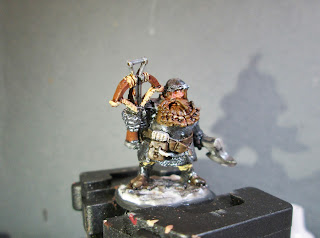 When the washes were dry, I highlighted his face with some Crafter's Acrylic "Flesh" mixed with a little of the Shading Flesh".   I then highlighted his beard with Americana "Sable Brown", and then a little Americana "Khaki Tan".  Next, I painted the beads in his beard, using a base of Apple Barrel "Yellow", and then highlighting up using, first, Crafter's Acrylic "Daffodil Yellow", and then Apple Barrel "Lemon Chiffon".  I first only highlighted alternating beads, as I planned to paint the other ones with gold, but as I looked at the highlighted beads I realized I had achieved something of an unintentional Non-Metallic Metal  (NMM) effect unintentionally, so I just went back and highlighted the rest of the beads. 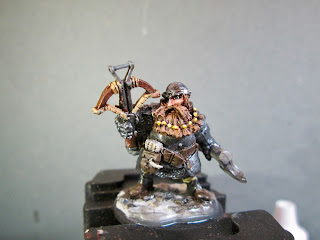 Next, I highlighted his belts, straps, and quiver with Americana "Terra Cotta", and then highlighted the pouch on his back with the "Khaki Tan".  I then highlighted the wood parts of the crossbow, the axe handle, and his shoes with Americana "Mississippi Mud", and the rope on the crossbow with the "Bleached Sand".   after that, I highlighted the fletchings with White, and the fang(?) with Crafter's Acrylic "Light Antique White".
I then turned to the non-armor metal parts; and painted his beer mug with Accent "Princely Pewter", and the axe head and crossbow fittings with Ceramcoat "Metallic Pewter".   I then went back and highlighted these parts, as well as some of the armor with the "Metallic Silver".
Lastly, I painted the figure's base with Black.
When the Black was dry, I used some white glue to glue a little black course sand onto the base.  When this was dry I drybrushed the bases with some of the Americana "Neutral Grey", and then some of the "Dove Grey".
I let the figure dry overnight and the next day I gave him a coat of Americana "DuraClear Matte" varnish.  Another overnight dry, and I sprayed it with Testor's Dullcote". 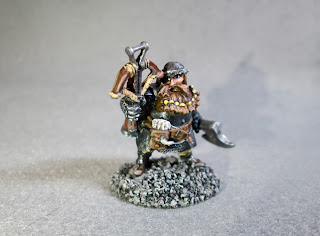 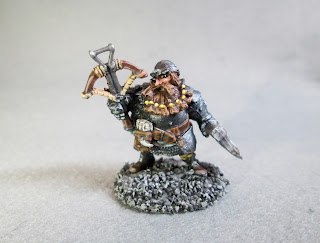 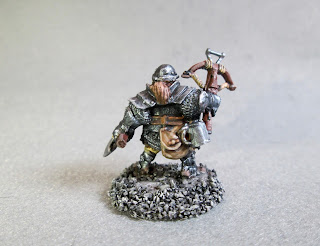 I like how this Dwarf turned out; though in the end, I find the sculpt's turned head a little awkward looking.  The beard in my opinion is not arranged in  a position to match the angle of the head, and the face ends up having a somewhat squished appearance.  But, in the end, none of that will affect his performance in a Frostgrave warband!  :)
Posted by Chris Palmer