Over the weekend I finished up Valeros, Iconic Fighter; the last of the Iconics and Officially Licensed Pathfinder Miniatures set I had left to complete.  This set now joins the list of completed sets over on the right.
This was another figure from this set that I wasn't particularly fond of. Yes, it has a great dynamic sculpt, but I just found it to be overly busy feeling; with stuff pointing in several different directions, and no real "front"to the figure.  So, I thought I would use this figure to do an experiment. I had been thinking a while about trying: painting a figure with mainly inks and washes, and I thought this would be a good opportunity to try it.
So, I prepped the figure in the usual way; soaking it in a dish of water with a couple drops of dish-soap added, then I gave it a light scrub with a soft toothbrush, and then rinsed and dried it.  Next, I glued the figure to a black-primed 1" fender washer with Aleene's Tacky glue, and then glued the washer-mounted figure to a tongue depressor with a couple drops of the Elmer's glue. 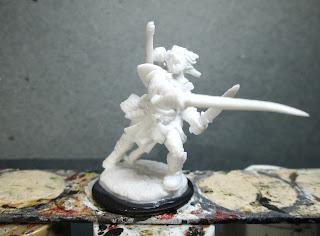 I began by painting the figure with Ceramcoat "Territorial Beige".  I then gave it a complete wash with GW Agrax Earthshade" wash.  When that was dry, I drybrushed it with Americana "Khaki Tan". 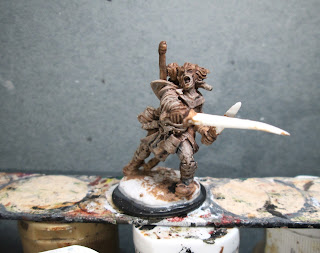 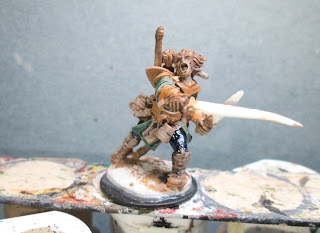 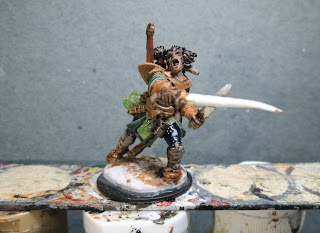 I then painted his eyes teeth, and tongue, then did highlights on his skin with a mix of the "Territorial Beige" ,and some Crafter's Acrylic "Flesh". I the painted his swords with Americana Zinc. Next, I painted the arrow fletchings with Crafters Acrylic "Storm Cloud Grey".  i then went back and painted his swords with Folk Art Metallics "Gunmetal Grey", and followed up with Folk Art Metallics "Silver Sterling" highlights.   Lastly, I painted the figure's integral base with Ceramcoat "Walnut".
After the figure had overnight to dry, I gave it a coat of Ceramcoat "Matte Varnish".   When the varnish was dry, I flocked the base, and that evening I sprayed the figure with Testor's Dullcote. 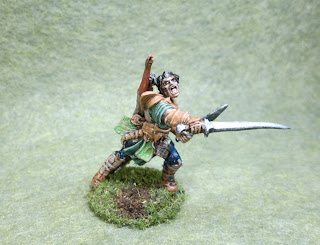 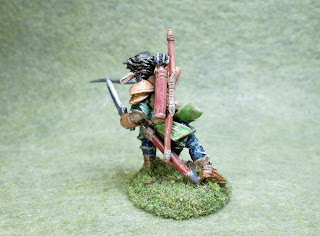 Well, it certainly is an interesting effect.  And I can see it useful if you wanted to get a lot of stuff done quick.  I don't, however, thinkI will be adopting a new panting style. :)

So, that wraps up the Iconics and Officially Licensed Pathfinder Miniatures set.  My plan is to do another four Orcpocalypse figures for next week, and then start in on the Pirates set.