Yay, I'm back!  Over the past month, as I was furiously slapping paint on a couple hundred Wars of Ozz figures, I also started to work on the Bones 4 "Runehorn Hut" from the Lost Valley expansion. Unfortunately, since I was working on it in a haphazard, pick it up now and then, kind of way; I didn't do a good job of recording what specific colors I used for the whole thing.
I prepped the hut in the usual way, soaking it and the little bowls that come as a separate piece, in a dish of water with a couple drops of dish-soap added, then giving the pieces a light scrub with a soft toothbrush, and then rinsing and drying it.  I then glued the bowls in place with Gorilla Superglue gel, and then glued the figure to the top of a large pill bottle with a couple drops of Elmers white glue. 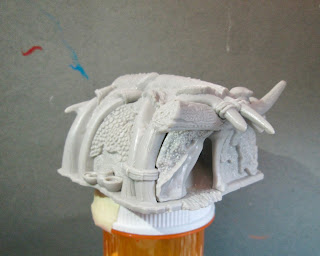 I began by applying some Citadel Contrast "Snakebite Leather" to a couple of the skin sections.  I realized at that point I should probably lay down a white undercoat, so I went back and painted the rest of the model with Americana "Snow White". 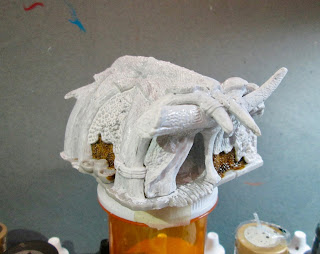 I then applied several more shades of Citadel Contrast, including "Creed Camo", "Wyldwood", and "Basilicanum Grey". 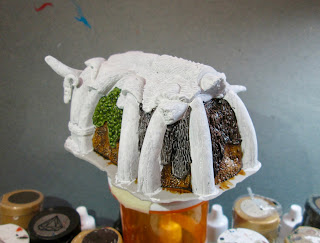 I did the fur with stripes on the top with Citadel Contrast "Aggaros Dunes" and then Citadel Contrast "Black Templar".  I was running out of Contrast colors that I owned at this point, so started doing the rest of the hides and furs with regular paint, such as the Americana "Neutral Grey" that's visible on the corner of the hut. 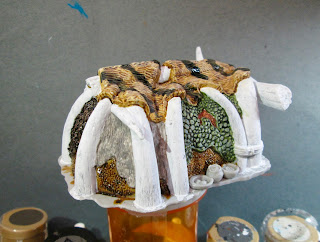 I then did the tusks and bones using Citadel Contrast "Skeleton Horde".  It came out a little darker than I liked so I drybrushed it with a little Americana "Bleached Bone". I also thought the fur roof was a little too flat, so I carefully drybrushed the "Aggaros Dune" with some Americana "Antique White", and the "Templar Black" with some of the "Neutral Grey". After that, I used regular paint to paint the three bowls on the side, and some Americana "Mississippi Mud" to paint the lashings. 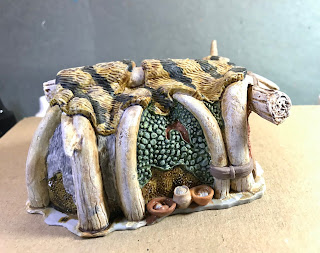 Next, I painted the contents of the bowls, then went over the bowls, and lashings and the borders between some of the skins and the tusks, with Citadel "Agrax Earthsahde" wash. 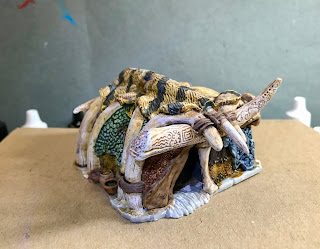 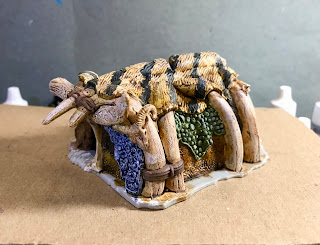 I then highlighted the lashings with some Americana "Fawn", and after that, I painted the base with Folk Art "Teddy Bear Brown".  Lastly, I did some highlights on the base with some Americana "Khaki Tan".
I let the hut dry overnight and the next day I gave it a coat of Americana "DuraClear Matte" varnish.    Then, when  the varnish was dry, I applied some tufts around the hut.  Another overnight dry, and I sprayed it with Testor's "Dullcote". 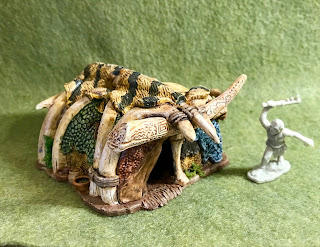 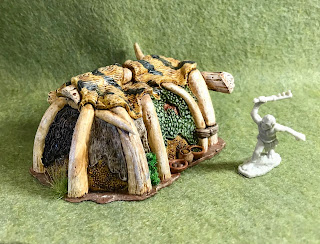 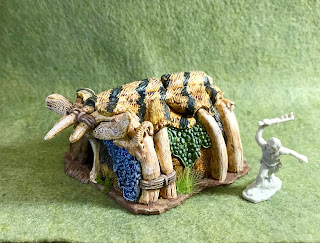 While I was never totally satisfied with the hut as I was working on it, I think it came out looking okay in the end.   It was little cold and damp when I applied the Dullcote, so the figure still has a bit of sheen.  I'll have to go back and Dulcote it again when the weather improves.
Posted by Chris Palmer