This past week I took a break from Gnolls and worked on another beastman figure for our upcoming Frostgrave game: Bloodhoof, Minotaur Barbarian, from the Beast Mode set.
I prepped the figure in the usual way; soaking it in a dish of water with a couple drops of dish-soap added, then giving it a light scrub with a soft toothbrush, and then rinsing and drying it.    I then glued the figure to a black-primed 1.5" fender washer with Aleene's Tacky glue, and then glued the washer-mounted figure to a tongue depressor with a couple drops of the Elmer's glue. 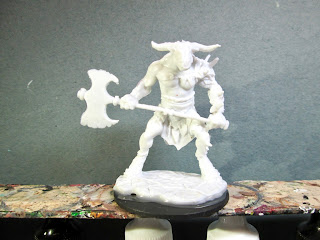 I began by giving the figure a wash with heavily thinned Reaper "Brown Liner" using a wet brush.  When that was dry, I painted his skin with Games Workshop "Vermin Brown".  I then painted his head and leg fur with Crafter's Acrylic "Cinnamon Brown", and his loin cloth with Ceramcoat "Territorial Beige". 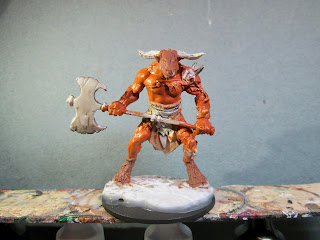 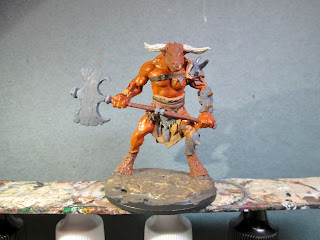 I then repainted the parts I had painted the "Zinc" using Folk Art Metallics "Gunmetal Grey"; and repainted the parts I had painted with the "Mustard Seed using Ceramcoat "Bronze".  Then, when everything had a while to dry, I gave the entire figure a wash with Citadel "Agrax Earthshade" wash using a wet brush.   When the wash was dry, I highlighted his skin with a mix of Americana "terra Cotta" and the "Vermin Brown".  After that, I highlighted his head and lower legs with Americana "Sable Brown".  I painted his eyes with Accent "RealUmber", and added tiny white dots to each. 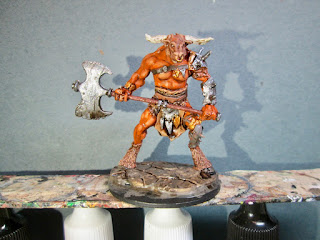 Next, I highlighted his loin cloth with Folk Art "Butter Pecan",  and then highlighted the straps, and the axe handle, with Americana "Mississippi Mud".  I also blended in some black to the ends of his horns. I then worked on the metallics; highlighting the axe and armor that I had originally painted with the "Gunmetal Grey" using Ceramcoat "Metallic Silver", and the parts I had painted with the "Bronze", using Ceramcoat "14K Gold".
When I was done painting the figure, I used some white glue to glue a little sand to the base.  When this was dry, I painted the sand with the "Charcoal Grey", and when the paint was dry, I drybrushed the base with some of the Territorial Beige", and then some Americana "Antique White".
I let the figure dry overnight and the next day I gave him a coat of Americana "DuraClear Matte" varnish.  Another overnight dry, and I sprayed him with Testor's Dullcote". 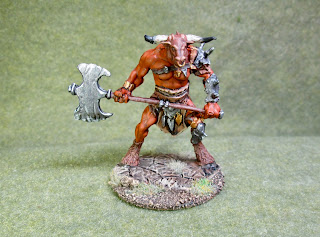 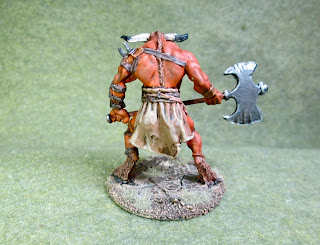 I like how he turned out.  It's nothing exciting, but a nice solid gaming figure. I'm going to try to finish up his partner the Minotaur Hero figure next week before returning to the Gnolls.
Posted by Chris Palmer