This week I painted the Danar, Male Assassin figure from the 30 New Bones Set.   I had already painted the Female Assassin figure earlier in a black and dark blue scheme, figuring it was a good combination for someone who crept around in the shadows, so I definitely wanted to try something different than black and blue again.   I decided I would try a more "urban camouflage" look for this figure, something good for sneaking around a castle or a town; and so decided on a more gray and black scheme, with the added detail of doing a stonework pattern on his cloak, so he can easily blend into shadowy walls.
I began my preparation of this figure in the usual way; soaking it in a dish of water with a couple drops of dish soap added, then giving it a light scrub with a soft toothbrush, and then rinsing and drying.  I then glued the figure to a 1" black-primed fender washer with Aleene's Tacky glue, and glued the washer to a tongue depressor with a couple drops of Elmer's White Glue. 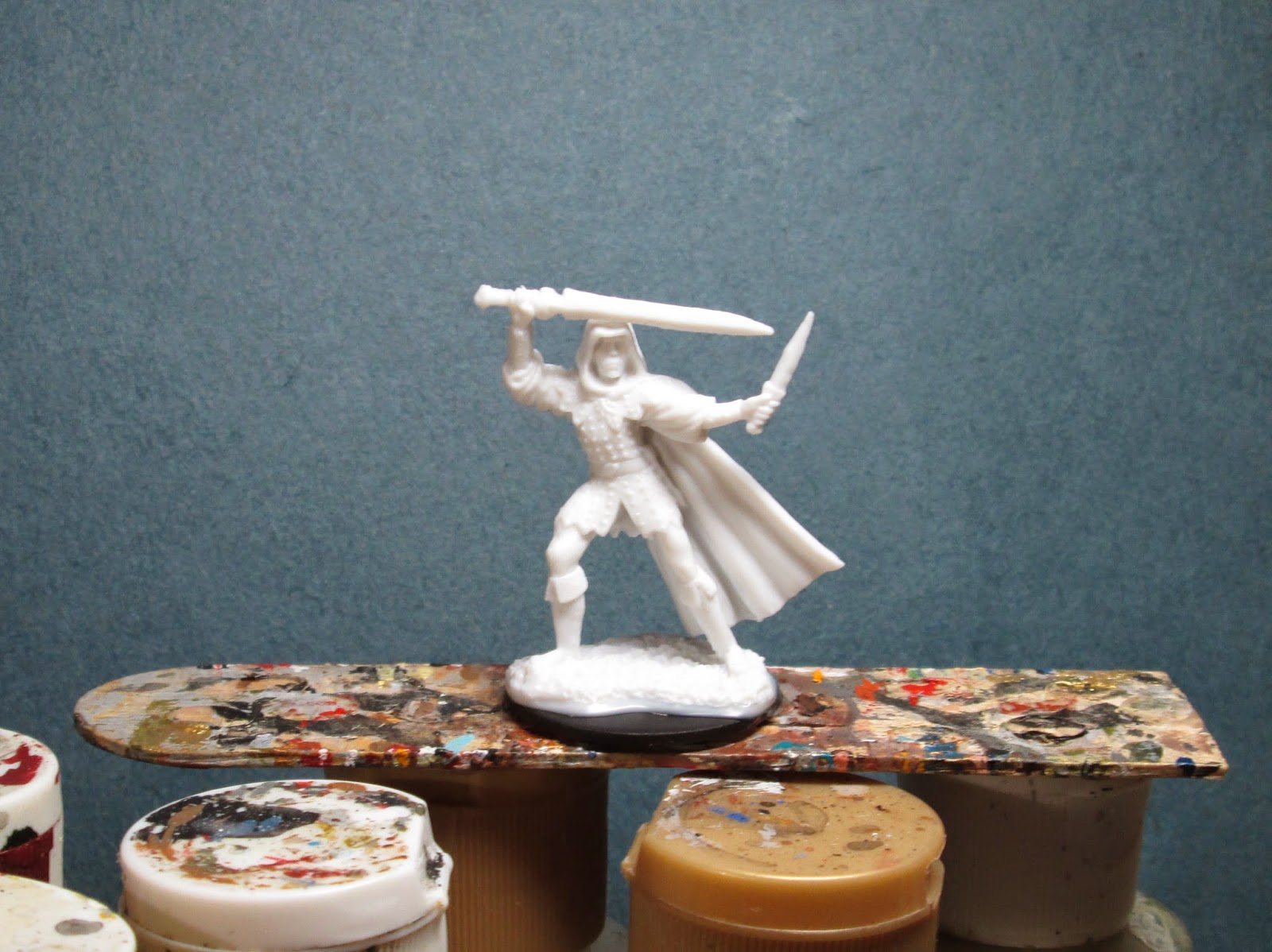 I began by painting the pants legs and his sleeves with  Duncan "Slate Grey".   Then I painted the cape with Americana "Dove Grey". 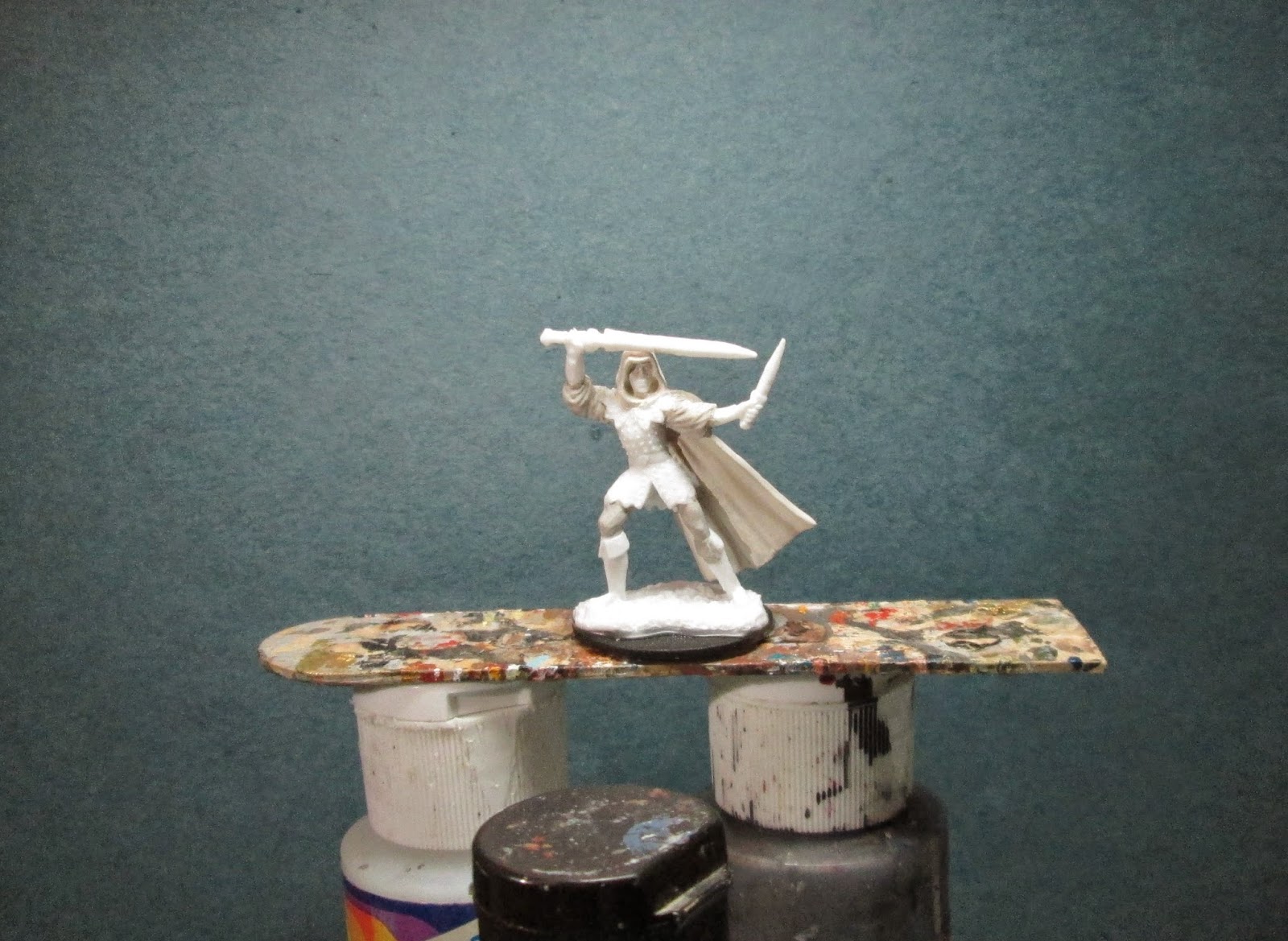 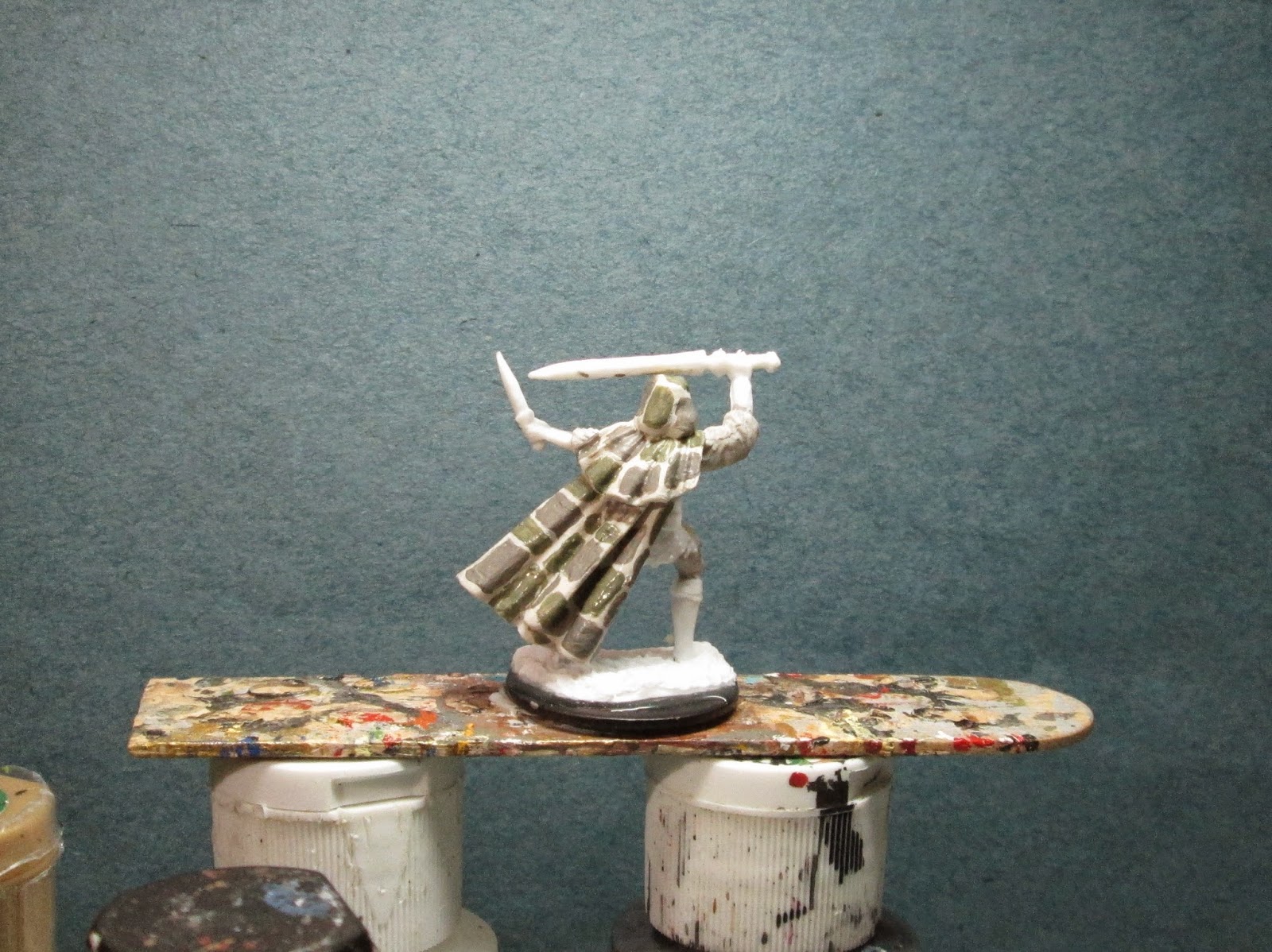 I now gave the whole figure a wash with thinned black ink, but I hadn't let the stonework pattern dry long enough, so some of it got a little mottled and the edges became less defined.   I tried to fix it as best I could, and being as it's camouflage, a little irregularity doesn't look to bad; but it was a good lesson for me in patience.  After the ink had a good long time to dry, I painted his studded jerkin, boots, wrist guards, belt, and sword grips with black. 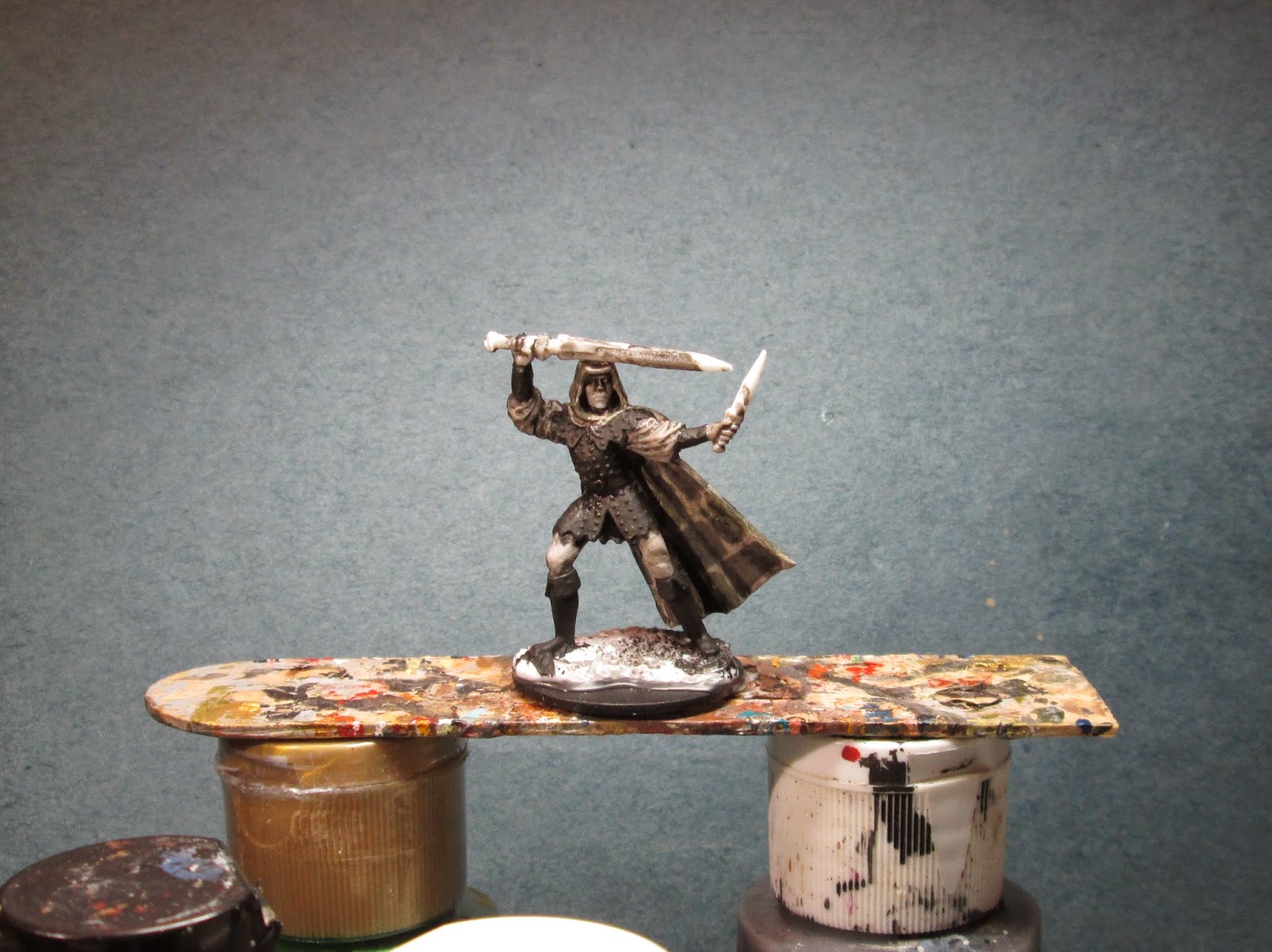 I then went over all the parts I had just painted black and drybrushed them with GW "Shadow Grey". Next, I painted his face and hands with Americana "Shading Flesh". His sword and dagger I painted with Ceramcoat "Metallic Pewter". 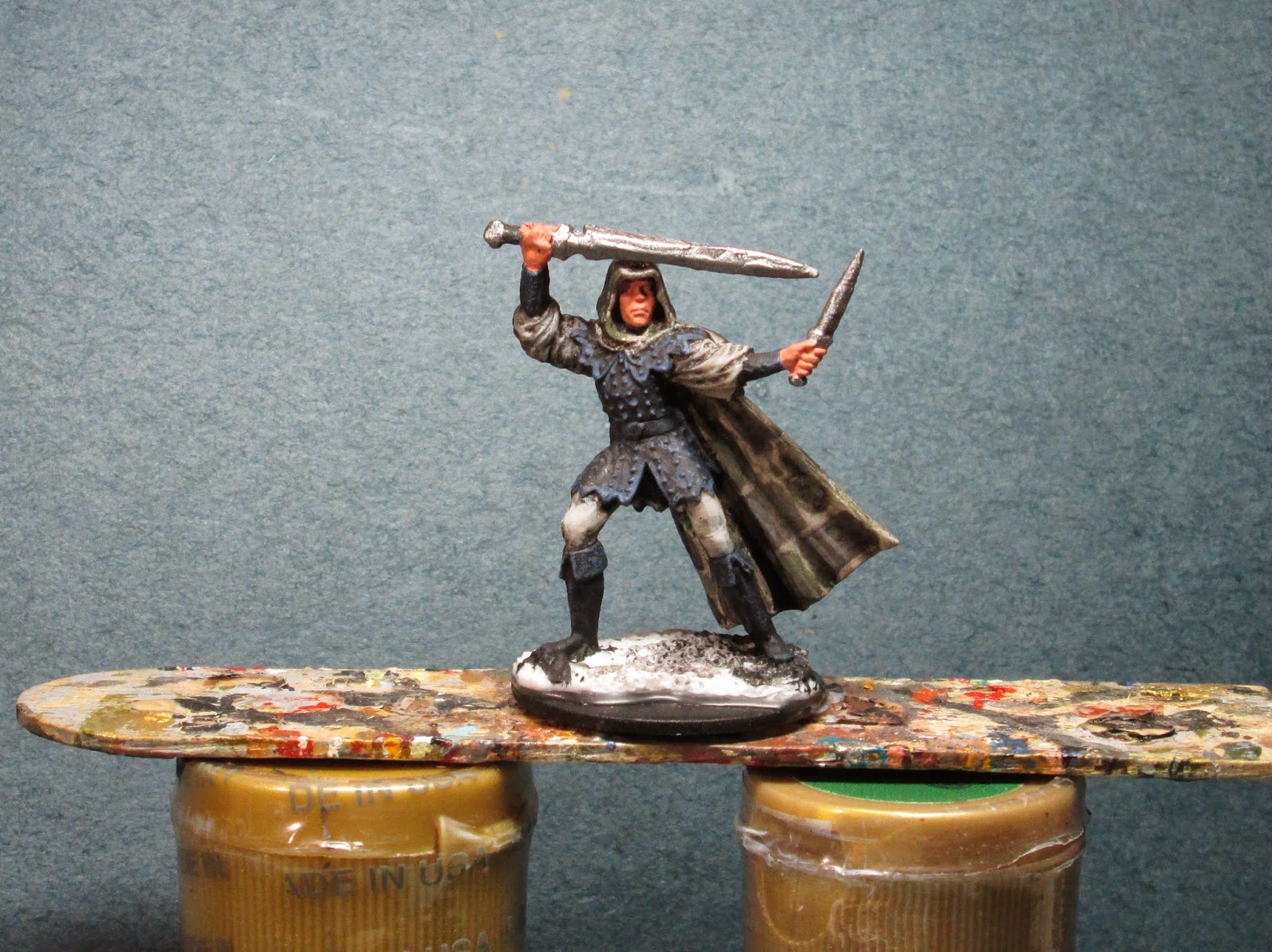 Now I gave his flesh a wash with thinned Winsor-Newton Peat Brown ink.  I then went and added highlights to his pants and sleeves with the base "Slate Grey", and I highlighted his cloak with the "Medium Grey" and "Poppy Seed".  I painted in his eyes, and then highlighted his face and hands with the base "Shading Flesh".  Lastly, I added highlights to the weapons with Folk Art "Silver Sterling".  I then painted the base around his feet with Americana "Asphaltum to cover the bare white before flocking.  The figure now sat overnight, and the next morning I gave it a coat of Ceramcoat "Matte Varnish".  When this had several hours to dry, I flocked the base, and the next day I sprayed the figure with Testor's Dullcote" spray paint. 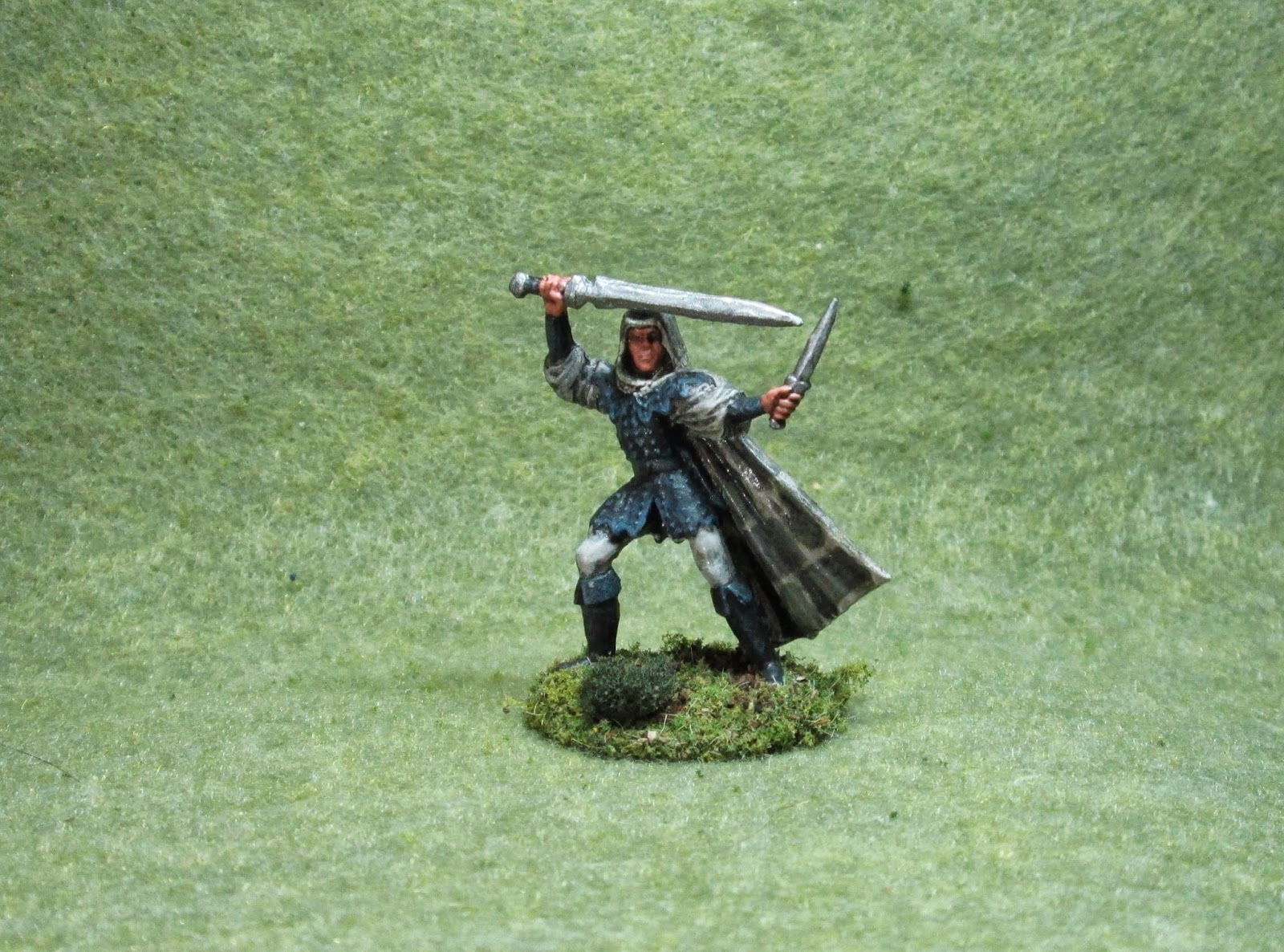 Overall I am pleased with how this figure came out.  It's a very simple figure, and I think the added detail on the cloak gives it a nice special twist. 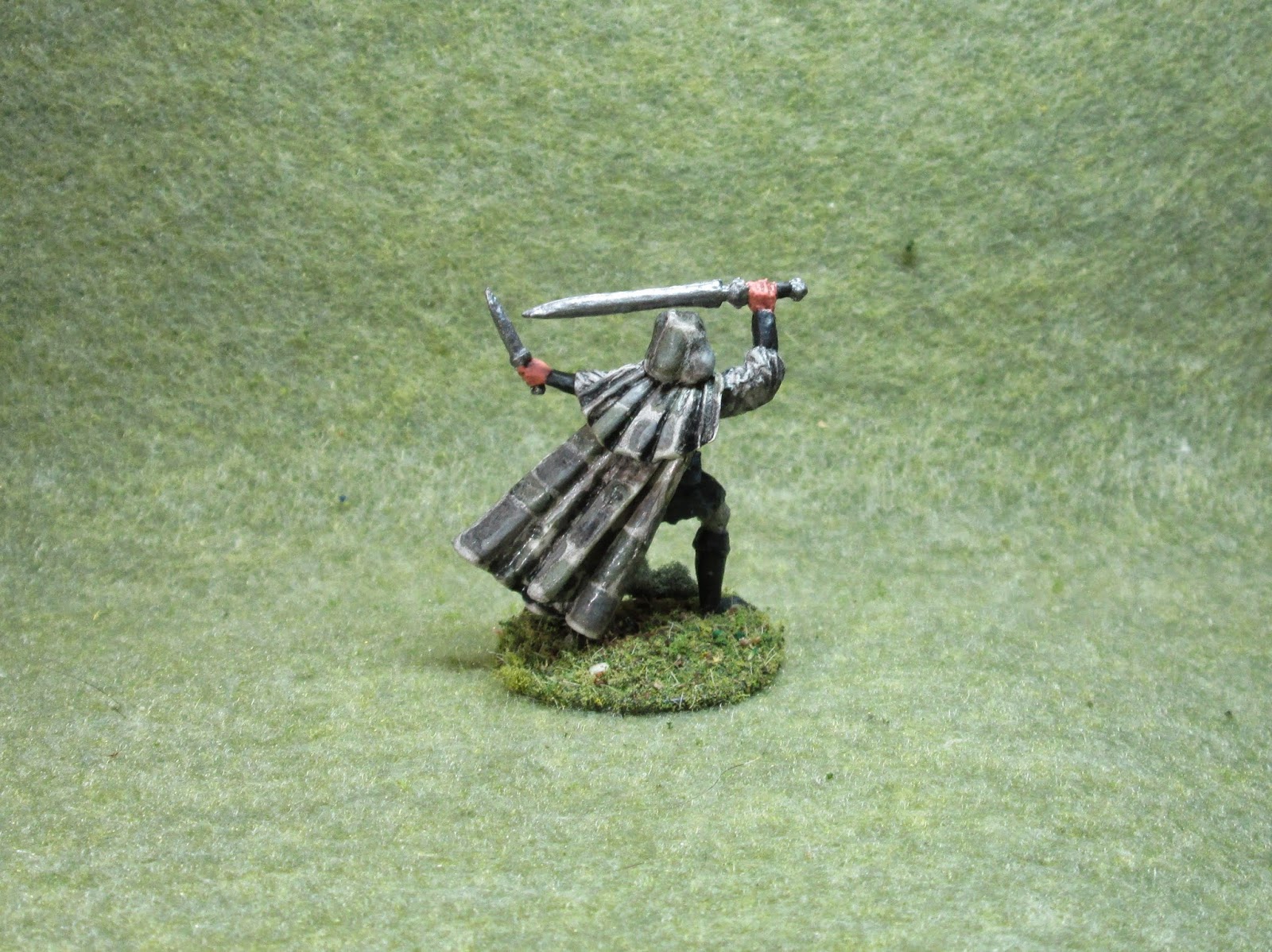 It looks like I will have another quick figure done for Thursday, so tune in then.