As I mentioned in the battle report I did for my previous post, I needed an elf archer to complete a warband I was preparing for a Song of Blades and Heroes game last Saturday, so Thursday night I grabbed one of the remaining archer figures from the 30 New Bones set, got her ready, and painted her up Friday.  I had already soaked her in dishsoap and water previously, so I glued here to a black-primed 1" fender washer, and glued this to a tongue depressor with two drops of white glue. I let this dry for a couple hours, and then gave the figure a wash with some thinned black ink with a tiny bit of dish soap added to help it flowing into the recesses.  This has become my new favorite way to prepare Bones that I don't want to prime black, but leave their natural white.  It really helps outline everything sculpted on the figure.
When considering a color scheme for this figure, I wanted to do something that wasn't the typical elf  dressed in green, yet, I wanted it to be something natural an outdoorsy looking.  So, inspired by the beautiful Fall colors we've had around here lately, I decided to try an autumnal theme for her outfit. 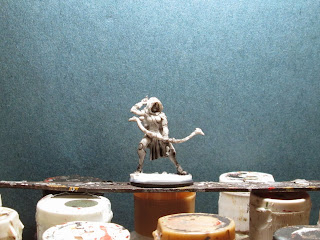 I began by painting her leggings with GW "Bubonic Brown", and the shin and knee guards with GW "Vermin Brown". Next I painted her tunic with Americana "Mississippi Mud", and her cloak with Folk-Art "Barnyard Red". 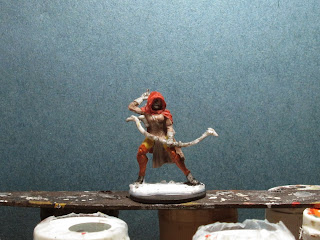 I then worked on her belts and her quiver.  These I painted in Crafter Edition"Spice Brown". The bow I painted with Americana "Buttermilk".   The two lines of stitching running down the quiver I painted with Apple Barrel "apple Maple Syrup" . The arrow shafts were done in Americana "Khaki Tan", and the fletchings were done in Apple Barrel "Yellow".  Her face I painted with GW "Elf Flesh".  The last parts of her outfit I did were her gloves and shoes.  The gloves I did with with Aleene's "Dusty Khaki", and the shoes with Folk Art "Dapple Gray". Finally I painted the metal parts of the bow, sword, and her quiver strap's buckle, as well as the pin holding her cloak, with Ceramcoat "Metallic Copper" Both the bow's and sword's grips were painted with DecoArt "Cinnamon Brown". 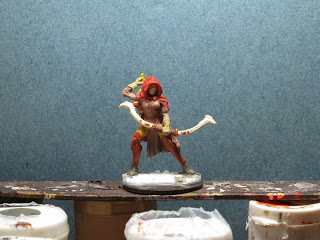 Lastly, I decided I wanted to do some sort of camouflage on her cloak, so it would look like she could easily blend into an Autumn woods.    I first went and randomly added small splotches to her cloak with GW "Blazing Orange", and then went back and added random tiny dots on or near the orange splotches with the Yellow I had used on the fletchings.  When everything had dried, I gave the whole figure a wash with thinned Winsor Newton Peat brown Ink. 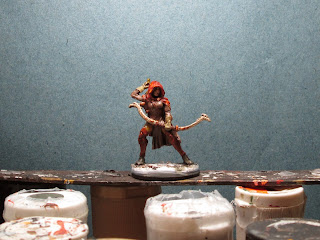 When this had had time to try I went back and added highlights to everything with the base colors, and on some of the more prominently raised areas with the base color with a little bit of the "Buttermilk" mixed in to lighten it further. I also painted her lips with GW "Tanned Flesh", and then added a little "Elf Flesh" to it to do highlights.  After the figure had time to dry, I gave it a coat of Ceramcoat "Matte Varnish"; and when this was dry, I flocked the base. I wanted to carry the autumnal theme through to the base, so I glued some bits of old oregano I had to the base to represent fallen leaves, and actually painted a few of them orange, red, and yellow to look more Fall-like.  I also added some bits of orange flocking to the base. A bit of old twine made some nice dried grass. 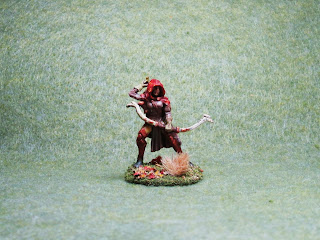 Lastly, before I went to bed, I sprayed the figure with Testor's "Dullcote' 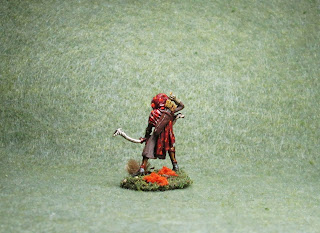 I'm very pleased with how this figure turned out, especially for a quick paint job.  Luckily, the figure is very simply dressed, and well sculpted, so painting it was an easy task.