This week I completed Zalash, Dark Elf Assassin, from the Dark Elves set.  As I stated with my previous figure from this set, I'm not a fan of these Dark Elf sculpts, as I think they look too spindley, and their wrapped layers of clothes just look odd to me.  So, I thought I would take the opportunity to try an experiment with this figure; painting him all in black, and simply using drybrushed highlights to give a hint of color.
I prepped the figure in the usual way; soaking it in a dish of water with a couple drops of dish- soap added, then giving it a light scrub with a soft toothbrush, and then rinsing and drying it.  I then glued the figure to a black-primed 1" fender washer with Aleene's Tacky glue, and then glued the washer-mounted figure to a tongue depressor with a couple drops of the Elmer's glue. 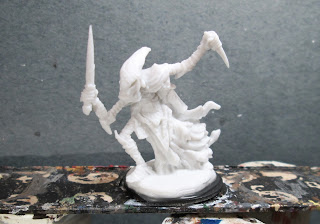 I began by painting the figure entirely in Black.  I then drybrushed him with Americana "Zinc, followed by a lighter drybrushing with Crater's Acrylic "Strom Cloud Grey". 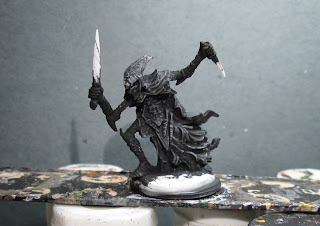 Next, I drybrushed his legging and arm wraps with Ceramoat "Denim Blue", and his hands with a mix of Folk Art "Dapple Grey" and Folk Art "Hauser Green Medium".  I highlighted the edge of his armor bits with Americana "Asphaltum". 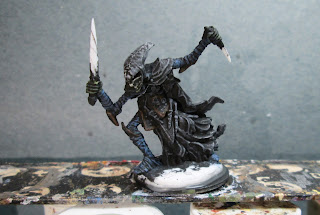 Next, I painted  his eyes, as I wanted to be able to see them peering out from behind his face covering.  I then painted his weapons, the studs on his studded armor and the triangular armor bits,  with Folk Art Metallics "Gunmetal Grey", and highlighted the weapons with Folk Art Metallics "Silver Sterling". Lastly, I painted his integral base with Ceramcoat "Walnut"
After the figure had overnight to dry, I gave it a coat of Ceramcoat "Matte Varnish" in the morning.  Later that morning I flocked the base, and that evening I sprayed the figure with Testor's Dullcote. 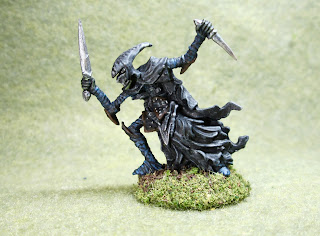 I'm pleased with how he came out, and enjoyed the challenge of doing this figure in all black.