Back at Historicon of 2013, I traded my Bones Griffon to a friend for a couple of his figures, including the Darkrasp, Evil Priest from the Dark Heroes set. (You can see these changes to the count total on the list at the upper right of this blog.) When I had first seen this figure, back when my Kickstarter had arrived, something about its appearance read "Santa Claus" to me; especially with the long "list" he holds in his left hand, obviously containing the names of those who'd been naughty.  So, when I had the chance to get an extra one, I took it; with the thought of some day converting it into a Santa Claus figure.  Well, with the onset of my Frostgrave addiction, that day finally rolled around; as I decided I wanted to make a Santa themed warband, and I selected this fellow to lead it. And, given the season of the year, it seemed the perfect time to paint him.
First,  I prepped the figure in the usual way; soaking it in a dish of water with a couple drops of dish- soap added, then giving it a light scrub with a soft toothbrush, and then rinsing and drying it.  I then had to make some changes to the figure to move him a little closer to Santa, and a little further from Evil Priest. I began by cutting off the blade and skull top of his scythe, turning it into more of a wizard's staff.  I then glued a small piece of lead shot to the end to make it resemble a stylized North Pole.   Next, I cut the bone-like ends off of the roll his scroll is wrapped around.  Lastly, I took some Tacky glue and layered it onto the front of the scroll in an effort to lessen the appearance of the runes that are carved into it, as my plan was to list "naughty" names on it.   I then glued the figure to a white-primed 1" fender washers with Aleene's Tacky glue, and then glued the washer-mounted figure to a tongue depressor with a couple drops of the Elmer's glue. I finished the prep with painting the little round shot on the end of his staff with some clear metal primer. 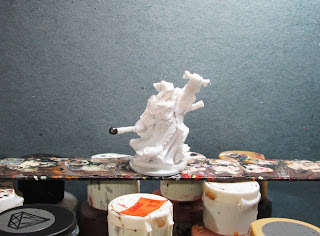 I began by painting his entire outfit with Apple Barrel "Apple Blue Spruce"  I then painted his face and hands with Americana "Shading Flesh", and his scroll with Americana "Buttermilk". 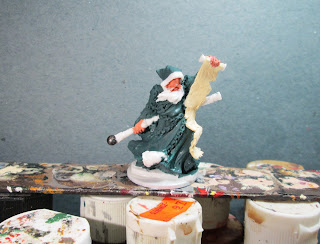 I wasn't happy with the look at this point, as I felt the all-green outfit didn't read Santa enough.  I had chosen the green because I planned to paint his staff in a series of red and white stripes, and I thought that if I painted his outfit red too, the staff might get lost visually.  At that point I made the decision to try a red outfit anyway, so repainted his robes with Apple Barrel "Apple Maroon", and left his cape and hood the original color.  I then painted the shadows on the robe with Americana "Cranberry Wine", and did highlights with Americana "Burgundy Wine".  These highlights really didn't show enough, so I mixed some Crafters Acrylic "Tutti Fruitti" (a bubblegum pink color)  with the "Burgundy Wine" to lighten it.   I then gave his face, hands, and his scroll a wash with GW "Agrax Earhshade" wash using a wet brush. 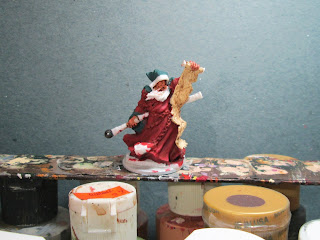 Next, I did highlights on his cape and hood with some of the "Apple Blue Spruce" mixed with the much lighter, Folk Art "Gray Green".  Then, I painted the borders on his hood and sleeve cuffs, as well as the white stripes on his staff and the ball at the top,  with Folk Art "Platinum Grey".   I then highlighted all these with White.  I next painted his beard and the object hanging from his front chain (which I planned to paint as a lantern) with Americana "Neutral Grey".   Afterwards, I painted the red stripes on his staff with Crafters Acrylic "Christmas Red". 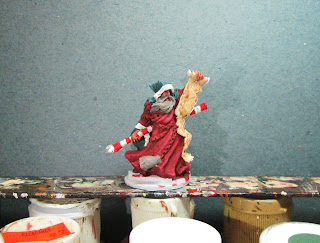 I highlighted the red stripes on the staff by mixing a little of the "Tutti Fruitti " with the "Christmas Red".  I then painted the ball on the top of the staff with Folk Art Extreme Glitter "Hologram", in attempt to give it a snow-globe appearance.  Next, I highlighted his beard with Crafters Acrylic "Storm Cloud Grey", and then some of the "Platinum Grey".  I painted his eyes, then highlighted his face and hands with the original "Shading Flesh".  I then mixed a little of the "Burgundy Wine" into the "Shading Flesh" to give him, "a nose like a cherry". Next, I painted the roll his scroll list is wrapped on with some Crafters Acrylic "Cinnamon Brown", and then highlighted the scroll list itself with some Crafters Acrylic "Light Antique White". I then used a ultra-fine point permanent marker to to write "Naughty", and a list of "names" on the scroll. I moved now to the lantern, painting a small glowing circle with White, then painting around this small White area with Apple Barrel "Yellow", and further around this "Yellow" with Crafters Acrylic "Pure Pumpkin.  I then mixed some of the "Pure Pumpkin" with the "Neutral Grey" to try and blend it into the shadowy area of the lantern.
I then painted  all his chains, and the top and bottom of the lantern, with Ceramcoat "Bronze", then went back and highlighted these with Ceramcoat "14K Gold". I then gave the top and bottom of the lantern a light wash with some GW "Badab Black" wash using a wet brush, to help define them a little better.  Lastly, I used White to  paint the base, especially anywhere that I had accidentally gotten other colors.
When everything had overnight to dry, I gave the figure a coat of Ceramcoat "Matte Varnish".  Then, the next morning, I flocked the base with Woodland Scenics "Snow" flock.  Later that afternoon I sprayed the figure with Testor's Dullcote. 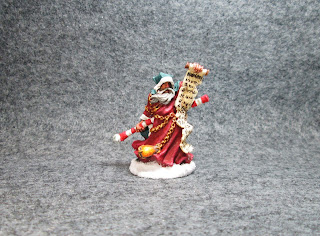 I'm very happy with how this figure turned out.  I think it really makes for a unique and fierce looking Santa, and will be perfect for my Frostgrave collection.