As my regular readers my have noticed, I haven't posted any figures the past couple of weeks.   I've found that as the Covid crisis continues and this period of home quarantine goes on, I have increasingly lost my ability to concentrate on the level of detail that painting figures requires.  It is a little frustrating, as I see others using this opportunity to greatly reduce their unpainted mini piles.  However, I find some comfort in seeing that I'm not alone, as here and there I see comments in different fora from others who find concentrating in this time of crisis a difficult thing to achieve.
This is not to say I've been creatively inactive. I've found I can still focus on working on bigger painting projects, and building things.  In that vein, I have been working slowly, as my ability permits, on an assortment of Leonardo DaVinci style landship vehicles for a club project to do a  Leonardo themed "tank" battle at Historicon using modified version of the  "What a Tanker!" rules.
Here are some of things I've been working on: 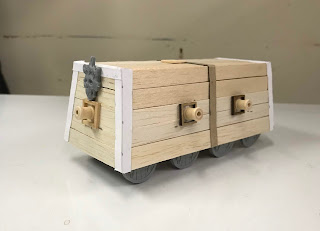 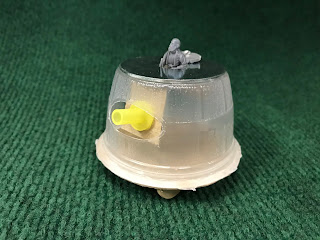 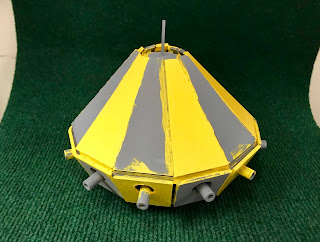 I've also entered into the world of long-distance wargaming using FaceTime and Discord, to continue playtest work on the "Wars of Ozz" project being done by Old Glory/Blue Moon and rules author Buck Surdu. You can find a number of those battle reports over on my One More Gaming Project blog. 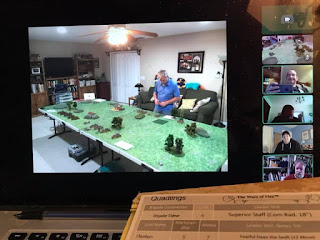 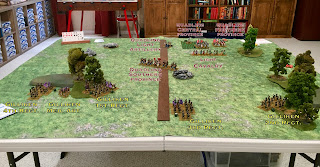 Hopefully, as time goes on I will find my concentration again, and get back to painting figures.  For the time being I'm just going to continue to move at my own pace creatively, and wait for the muse to strike again.  So please check back every week or so, hopefully it won't be too long before I'm back to posting more Bones!

This past week I painted the 4 Goblin Archers from the Bones 4 Core 24 Bonus Goblins set.
I prepped the figures in the usual way, soaking the parts in a dish of water with a couple drops of dish-soap added, then giving them a light scrub with a soft toothbrush, and then rinsing and drying them. I then glued them to 1" black-primed fender washers with Aleene's Tacky glue.  I then glued the washers onto a tongue depressor with a couple drops of Elmer's white glue.
You might notice that at some point I had a little green stuff left over and had constructed a small stone wall on the washer of the goblin second from the left before spraying it. 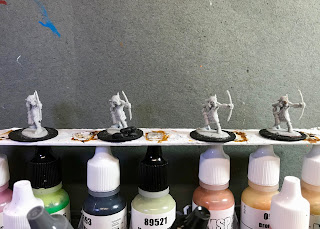 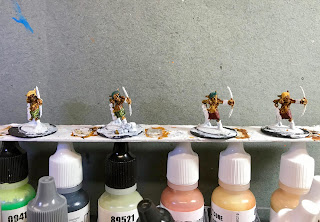 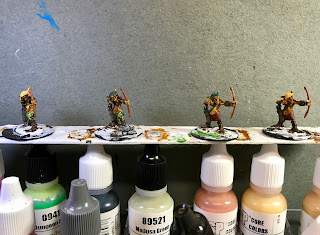 Next, I applied some Citadel "Agrax Earthshade" wash on the quivers, bows, and hats. When that was dry, I painted their eyes (using Americana "Antique White" for the whites), and then did some extra highlighting on their skin using some Apple Barrel "Maple Sugar Tan" mixed with some Accent "Golden Oxide".  After that I highlighted the yellow hats with Americana "Primary Yellow", and the green hats with Americana "Avocado" 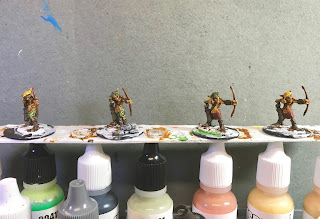 I then highlighted the red kilts with a little Ceramcoat "Opaque Red" and highlighted the quivers and wrist guards with some Americana "Mississippi Mud".  After that I painted the tips of the bows with Folk Art Metallics "Gunmetal Grey" and  I painted the bases with Americana "Mississippi Mud".
I let all the figures dry overnight and the next day I gave them a coat of Americana "DuraClear Matte" varnish.    Then, when  the varnish was dry, I used some white glue to flock the bases.  Another overnight dry, and I sprayed them with Testor's "Dullcote". 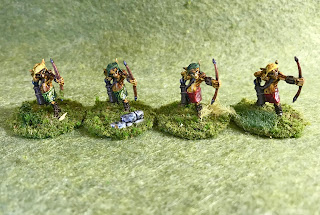 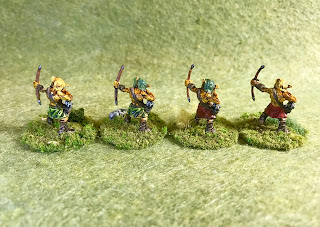 Here they are formed up in a unit with my Goblin Archers from past Kickstarters. 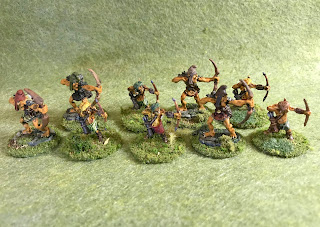 Being Goblin, I didn't put a lot of effort in to these guys, and I think they turned out okay.  When grouped with their fellow archers I think the unit looks good.  I was very pleased  that the "Snakebite Leather" Contrast paint was such a good match for the skin color I had used in the past; it made painting these guys much easier.
Posted by Chris Palmer No comments: