This past week I painted a set of 4 of the "Maggotcrown Swordsman" figures as a first step in building a 12 man unit of the Maggotcrown soldiers from the Dreadmere Expansion.   I had my original Maggotcrown soldier figures from the Kickstarter, and expanded my unit through trades and direct purchases from Reaper.
I prepped the figures in the usual way, soaking them in a dish of water with a couple drops of dish-soap added, then giving them a light scrub with a soft toothbrush, and then rinsing and drying them.   I wanted one of the Swordsmen to be the leader of the unit,  so I cut his sword arm at the elbow and repositioned it, and then sculpted him a helmet crest using some greenstuff.  I then glued them all to 1" brown-primed fender washers with Aleene's Tacky glue.  I then glued the washers onto a tongue depressor with a couple drops of Elmer's white glue. 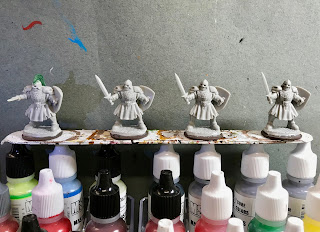 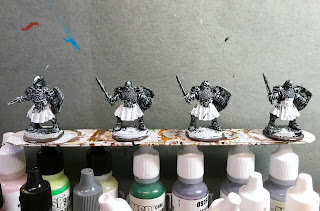 When the "Black Templar was dry, I drybrushed the armor and swords with Folk Art Metallics "Gunmetal Grey", followed with a drybrushing of Ceramcoat "Metallic Silver", and lastly a light drybrush with some Citadel "Mithril Silver".   After that, I painted the tunics with Reaper MSP Pathfinder "Urgathoa Red". 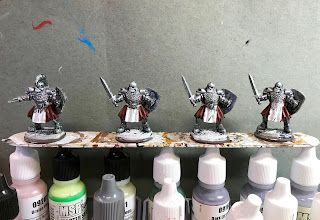 Next, I painted the tabards, and the eyes on the shield skulls with Ceramcoat "Black"; and then painted the belts, gloves, and shield straps with Reaper MSP "Coal Black".  After that, I painted the exposed parts of their faces with Citadel Contrast "Gulliman Flesh", and then did the faces of their shields, and the leader's crest with Reaper MSP "Fresh Blood".  I decided at that point that the chainmail was drybrushed too heavily and had lost its detail, so I went back over it with some Citadel "Nuln Oil" wash. 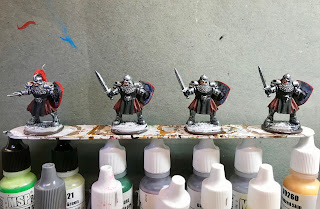 While I had the "Nuln Oil" out, I decided I also wanted to define the edges of the tabard, belts, and tunic, a little better, so I traced along the edges where the tabard and belts met the tunic using the wash.  After that, I painted the inside of the shields with some Ceramcoat "Metallic Pewter".  I then painted the skulls on the shields with Americana "Snow White".
Next, I highlighted the tunics with a mix of the base "Urgathoa Red" mixed with Reaper MSP Bones "Cinnamon Red". I then highlighted the tabards with Ceramcoat "Charcoal" followed with Americana "Zinc"; and followed that with highlighting the belts, gloves and shield straps with Citadel "The Fang".  After highlighting those parts, I highlighted the shields and the officer's crest using Reaper MSP Holly Berry", and some Reaper MSP "Hearth Fire".  Lastly,  I did some highlights on the shoulder skulls and helmets with Reaper MSP "Sparkling Snow", and then painted the bases with Americana "Mississippi Mud".
I let the Swordsmen dry overnight and the next day I gave them a coat of Americana "DuraClear Matte" varnish.    Then, when  the varnish was dry, I used some white glue to flock the bases.  Another overnight dry, and I sprayed them with Testor's "Dullcote". 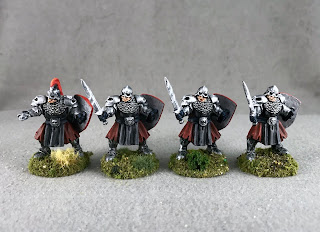 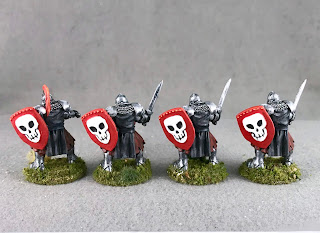 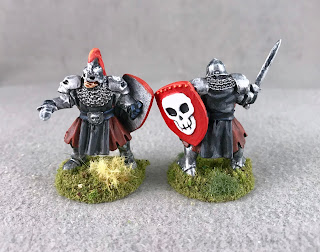 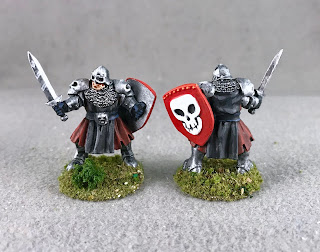 I'm really pleased with ow these guys turned out.   Sometimes I really appreciate these nice simple, clean and plain, sculpts and what an ease they are to paint.
Posted by Chris Palmer