Welcome to a special Thursday blog post!   I was excited to get the Stygian Barge Add-On from the recent Bones 4 Kickstarter, and I was not disappointed in the model when it arrived.  It is a truly beautiful and big ship. 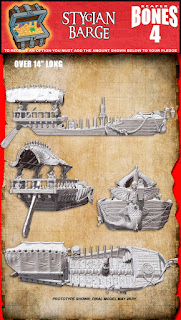 However, I didn't necessarily want to use the barge in all its Stygian glory; it looked more like a Necromancer's fancy yacht than anything else.  I wanted more of a plain everyday working barge.  I figured a plain barge would have much more game use than one specifically decked out in death-related motifs.  So, the first thing I set about doing was looking over the pieces to see just what removing all the skulls, etc. would involve.  With a little effort it seems like it just might work
The first thing I did was to glue the front middle and rear hull sections together using Gorilla Superglue Gel.  I then used coffee stirrers and toothpicks to lay down a new deck and trim in the middle hull section to cover over the bone strewn deck that is molded onto the model. 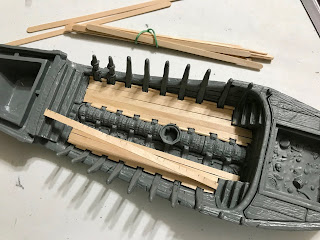 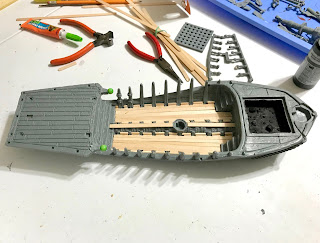 When the Black was dry I glued the hold cover over it, and then worked on putting together the rope and anchor assembly.  I then glued the barrel assembly to the other side 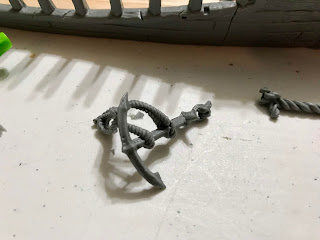 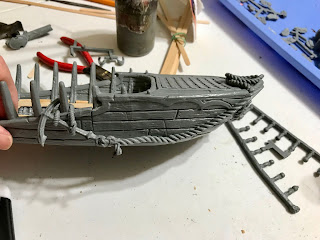 After that, I worked on gluing in the rear deck bracers. 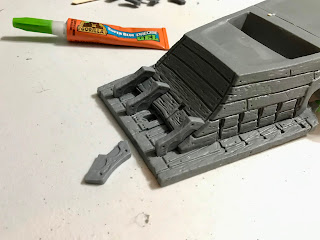 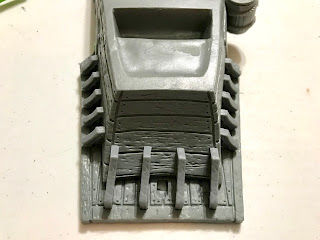 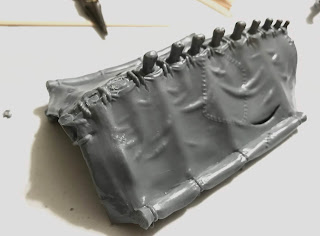 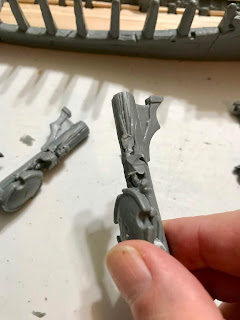 Next, I glued the rudder into place, and then the mast.  I left the skull on the mast, figuring it looked like some kind of trophy or oddity the crew came across, rather than strictly saying "necromancer's boat".
When these ware dry, I glued the roof supports to the deck, setting the roof in place to keep them aligned while the glue set, but not actually gluing the roof.  I don't want to permanently glue the roof until after I have painted the underside. 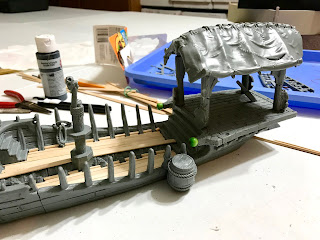 After the roof supports were dry, I worked on fixing where the skeletal mermaid figurehead was supposed to go.  I used a bit of bamboo skewer to make a bowsprit, and a little nail in the center of the rope circle to make it look like it was actually hanging from something. 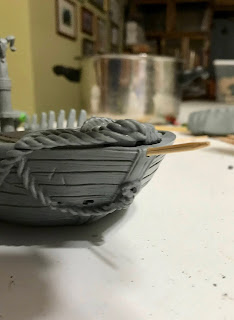 Lastly, I cut the skulls off of the ends of the railings, and once de-skulled, glued them into place 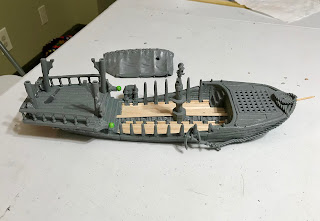 And here is the finished boat; ready for painting!   I'm very pleased with how it turned out, and think it will look suitably like a regular workaday barge.  Hopefully I will get it painted in time to use it in our June Ghost Archipelago game. 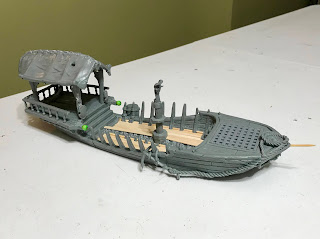