This weekend I finished painting up the Seoni, Iconic Sorceress, figure from the Iconics and Officially Licensed Pathfinder Miniatures Set.  Only one more figures to go from this set!
I can't say I'm a fan of this figure, as it appears to me that the character looks like she is running for her life.  I think I'd prefer something a little braver looking if I was selecting a character for an RPG, or such.  I guess it could make a funny diorama if you showed her with a massive troll chasing after her.  I think it's something about the way the head is tilted slightly to the side, like she is attempting to glance back behind her to see just how close big stompy death is.
So, I prepped the figure in the usual way; soaking it in a dish of water with a couple drops of dish-soap added, then I gave it a light scrub with a soft toothbrush, and then rinsed and dried it.  Next, I glued the figure to a black-primed 1" fender washer with Aleene's Tacky glue, and then glued the washer-mounted figure to a tongue depressor with a couple drops of the Elmer's glue.
I forgot to take a starting picture, so here's the catalog picture from the Reaper site.

I began by painting all her skin with Crafter's Acrylic "Flesh".  I then painted her clothing with Reaper MSP Bones "Tropical Blue", and her hair with Apple Barrel "Apple Maple Syrup". Next, I painted all the parts I planned to eventually paint gold with Accent "Golden Harvest". 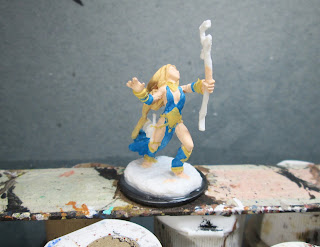 I then painted the little pouches hanging from her outfit, and her shoes, with Americana "Terra Cotta".  Next, I went over all the parts I had painted earlier with the "Golden Harvest, this time using Ceramcoat "Bronze".  After everything had a bit to dry, I gave the figure a wash with GW "Agrax Earthshade" wash, using a wet brush. 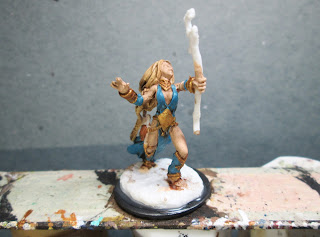 When the wash was dry, I painted the eyes, and the lips, and then highlighted all the skin with the base "Flesh".  I then added a little White to the "Flesh", and did some lighter highlights.  Next i worked on the hair, highlighting it first with Americana "Moon Yellow", and the Apple Barrel "Lemon Chiffon".  I then went back and added a few White highlights to the hair. 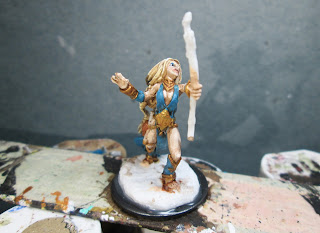 Next, I repainted her blue outfit with Folk Art "Metallic Blue Sapphire", and then went back and added highlights with Folk Art Pearl "Aqua Moire".   I then painted her staff and her dagger's scabbard with Crafter's Acrylic "Navy Blue". 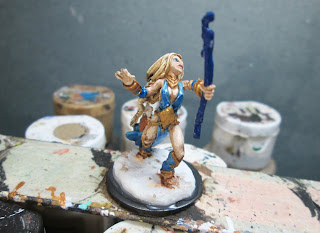 I painted the  two ribbons hanging from her right side,  with Crafter's Acrylic "Storm Cloud Grey", and then I did highlights on them with Folk Art "Platinum Grey". I finished them by adding White highlights.    While I had the White out, I used it to paint the twine on the staff.  I also painted the little object hanging from the staff with Apple Barrel "Yellow".   I then highlighted the little pouches hanging from her sides with Accent "Golden Oxide". I returned to work on the staff and gave the areas of twine I had painted White a wash with some GW Badab Black" wash using a wet brush".  While that dried, I worked on highlighting all the parts I had painted earlier wth the "Bronze", using Ceramcoat "14K Gold".   I then went back to the staff and highlighted the little object I had painted "Yellow", using Crafter's Acrylic "Daffodil Yellow", and then a pinpoint of White.  And, while I had the White open, I used it to highlight the twine that I had washed with the "Badab Black" wash earlier.   Next, I highlighted the staff with Ceramcoat "Denim Blue".  Lastly, I painted the figure's integral base with Ceramcoat "Walnut", and also used this color to also paint the dagger grip.
After the figure had overnight to dry, I gave it a coat of Ceramcoat "Matte Varnish".   When the varnish was dry, I flocked the base, and that evening I sprayed the figure with Testor's Dullcote. 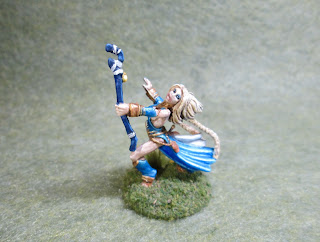 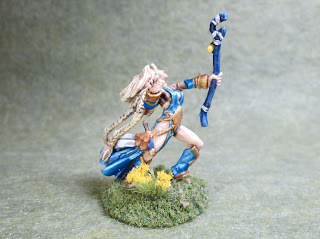 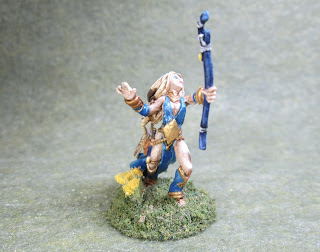 Well, there she is.  This figure was very hard to photograph, as there was no natural front to it; while her body faces one way, her head faces another... and her arms are shooting off in two different directions.  Also, I ended up making a hash of her face; she looks like she has undergone too much plastic surgery.  I just didn't care enough to spend a lot of time trying to fix it.   And, stacked against her is that she was jut a mess of mold lines; and in really crappy places to try and fix, like her fingers and braids.  On the positive side, she is finished.   And I can put her behind me and turn my attention to other things.