This past week I painted the "Boulderkin" from the Bones 5 Core Set.  In Bones 5, Reaper added a couple sets of figures that were groupings of similar figures in different poses.  As a gamer I loved this concept for unit building.  The Boulderkin were one such set, including 6 poses of the same basic rock creature.  As a wargamer I thought this was great, and ended up buying 3 extra sets of these figures for a total of 4; giving me 24 Boulderkin figures.   I decided to divide them into two groups: one group of 12 to base individually, and one group of 12 to mount on movement stands. 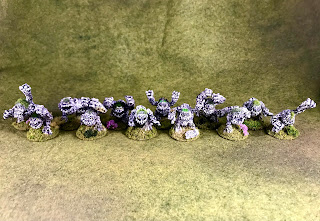 With four total sets, that gave me 4 of each individual pose; so I decided to paint them in groups of 4 like figures.  Since I wanted half for individual basing, and half for stand basing, I glued 2 to 1" primed washers using Aleene's Tacky glue, and left 2 on just their integral bases.  I then glued my groups of 4 onto tongue depressors using regular white glue. 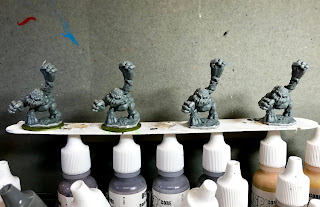 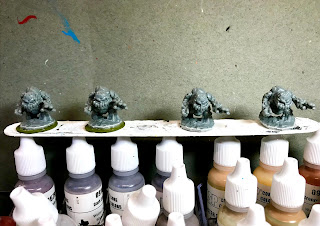 But before I did that, I decided I wanted one of my individually-mounted Boulderkin to be a distinct command figure.  So I choose a suitable pose, and chopped him in the middle and then chopped of one arm.. 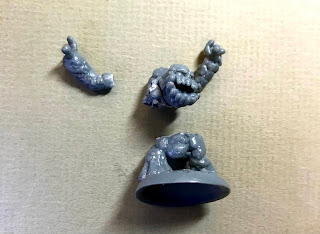 Using green stuff, I extended his middle so he would be slightly taller, and repositioned his right arm, and then re-sculpted the hand into a classic officer pointing pose. 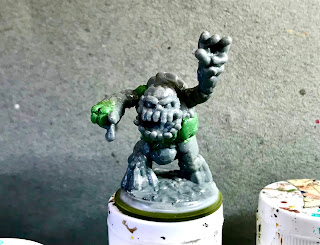 Since I had so many of these to point, I decided I wanted to use Citadel Contrast Paints to speed the process.  So, to begin, I gave all the figures a base coat of Ceramcoat "White". 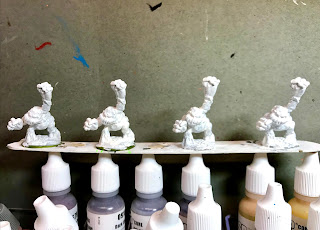 When the base coat was dry, I painted each figure entirely with Citadel Contrast "Basilicanum Grey". 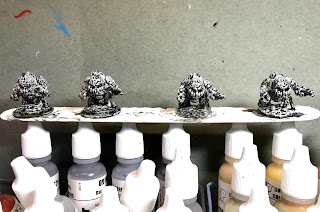 When the "Basilicanum Grey" was dry, I then went back and added a second layer to the insides of the mouths and their eyebrows to darken them.  On some of their eyebrows I did the second coat with "Citadel Contrast "Space Wolves Grey" to mix things up. At this point, I drybrushed the figures with some Americana "Dove Grey", paying particular attention to their "teeth" to help them stand out.   I then dabbed some of the "Space Wolves Grey", some Citadel Contrast Militarium Green", and some Citadel Contrast Aggaros Dune" here and there on different rocks of their bodies to add some visual interest.  After that, I painted their eyes with Crafters' Acrylic "Daffodil Yellow", and then painted Ceramcoat "Black" pupils.
Lastly, I painted their bases with Americana "Mississippi Mud".
I let all of them dry overnight and the next day I gave them a coat of Americana "DuraClear Matte" varnish.    Then, when  the varnish was dry, I  gave them tiny hairdos with some  different kinds of static grass and flock in an attempt to look like moss; gluing it on with white glue. When dry, I used the white glue to flock the bases.
Another overnight dry, and I sprayed the figures with Testor's Dullcote". 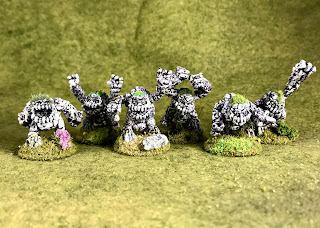 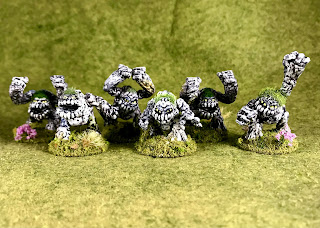 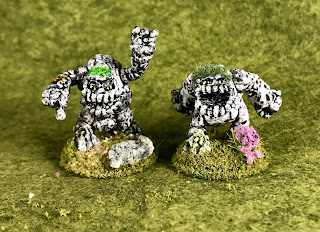 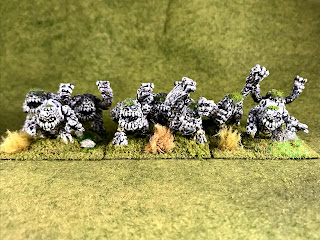 I'm generally happy with how these guys turned out.  The "Basilicanum Grey"  is a little splotchier than I would have liked, but the ability to paint so many figures quickly overshadowed those concerns.
Posted by Chris Palmer