This week I also completed the Mind Eater from the Bones II Dungeon Monsters set.  It's called an Intellect Devourer in my old D & D Monster Manual.  While I didn't see myself having much use for it as a 28mm monster, I thought a pair of them would look pretty cool as marauding Giant Mind Eaters to go with my 10mm "Bear Yourselves Valiantly" fantasy armies.  I was lucky enough to have a friend who was willing to give me the one from their set.  So, I prepped the figures in the usual way; soaking them in a dish of water with a couple drops of dish-soap added, then giving them a light scrub with a soft toothbrush, and then rinsing and drying.  Then, I glued them to a black-primed standard 3" x 1.5" BYV  sized metal base with Aleene's Tacky glue. 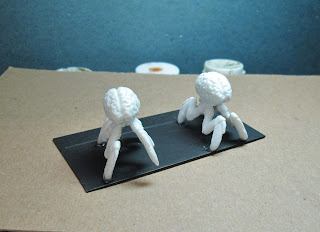 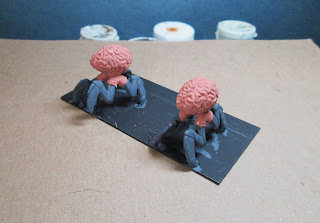 When the paint was dry, I gave both figures a wash with GW "Agrax Earthshade" wash using a wet brush. 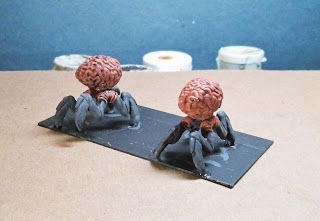 When the wash was dry, I highlight the top portion by drybrushing with the base "Shading Flesh", and I highlighted the bottom portion by first drybrushing with the base "Zinc", and then doing finer drybrushing on the leg edges with Duncan "Slate Grey".
I let the figures sit overnight, and the next morning I gave them a coat of Ceramcoat "Matte Varnish".  Later that afternoon I flocked the base. The next morning I sprayed the stand with Testor's "Dullcote" spray varnish. 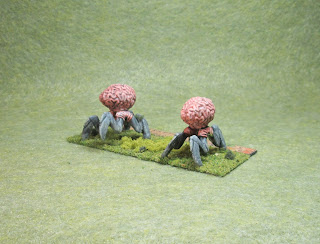 I'm happy with how this base of monsters turned out.  I think it will be a fun unit to deploy; perhaps as wandering monsters in the middle of a battle..