Over this past weekend, I finished up Cassie the Gnome Wizard from the 30 New Bones set.  Let me start this write-up with an apology though, because as you will see when you scroll down, I accidentally deleted a few of the in-process painting pictures for this figure.  :(   So, you'll have to infer a lot from picture 2 to picture 3. :)
Anyway, I began in the usual way; soaking in a dish of water with a couple drops of dish soap added, then giving a light scrub with a soft toothbrush, and then rinsing and drying.  I then glued her to a 7/8" black-primed fender washer with Aleene's Tacky glue, and then glued this washer with a couple drops of Elmer's glue to half a tongue depressor. 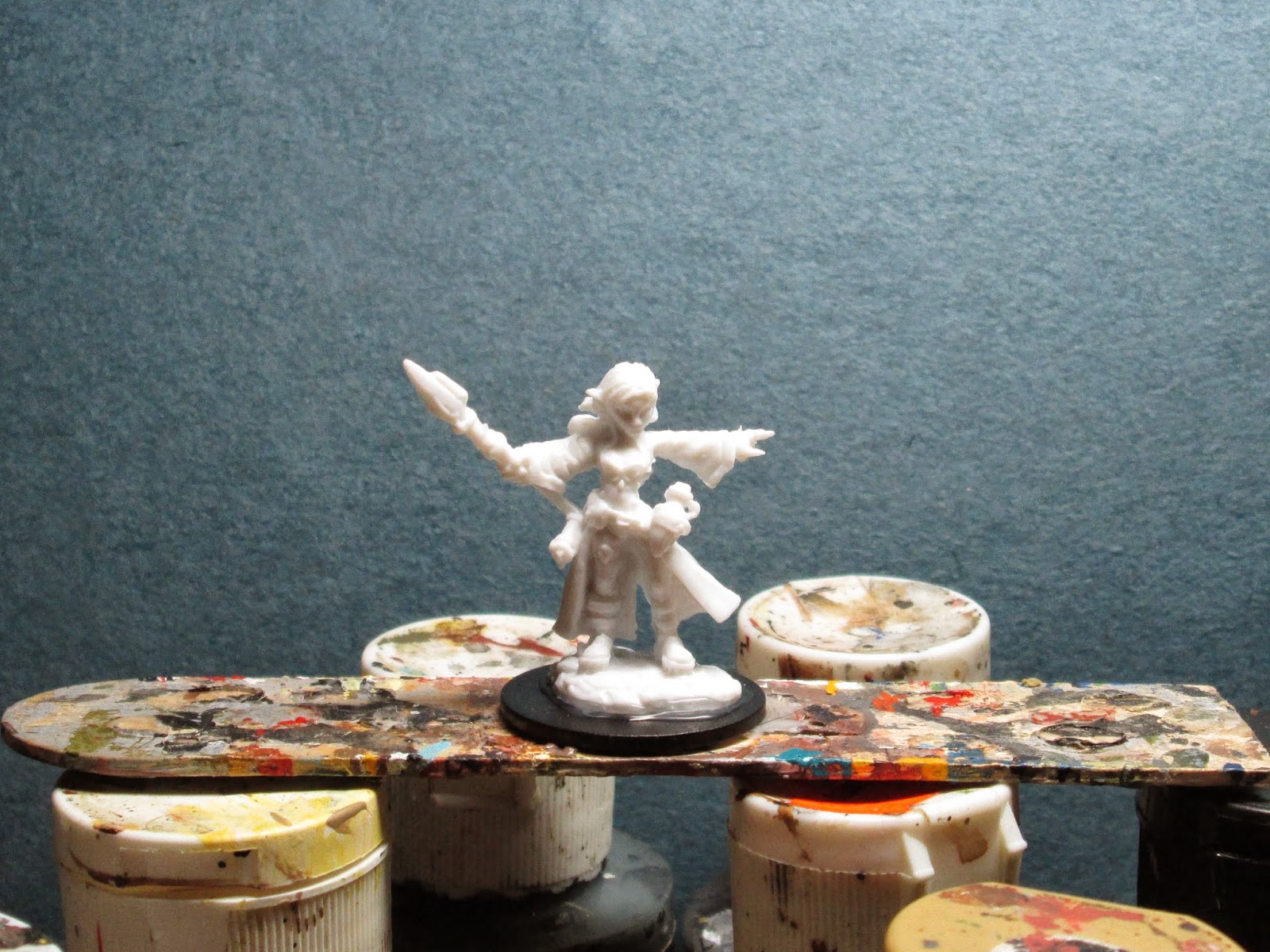 I looked up Gnomes in my trusty old D & D Monster Manual, and read that they have skin that is wood brown, an they have white hair.  Their clothing is leather and earth tones, and they like jewelry. So, to begin, I selected a nice "wood brown" paint and started on her skin, painting it Americana "Sable Brown".  Next I painted her leotard (?) with Accent "Real Umber", and her leggings with Americana "Khaki" 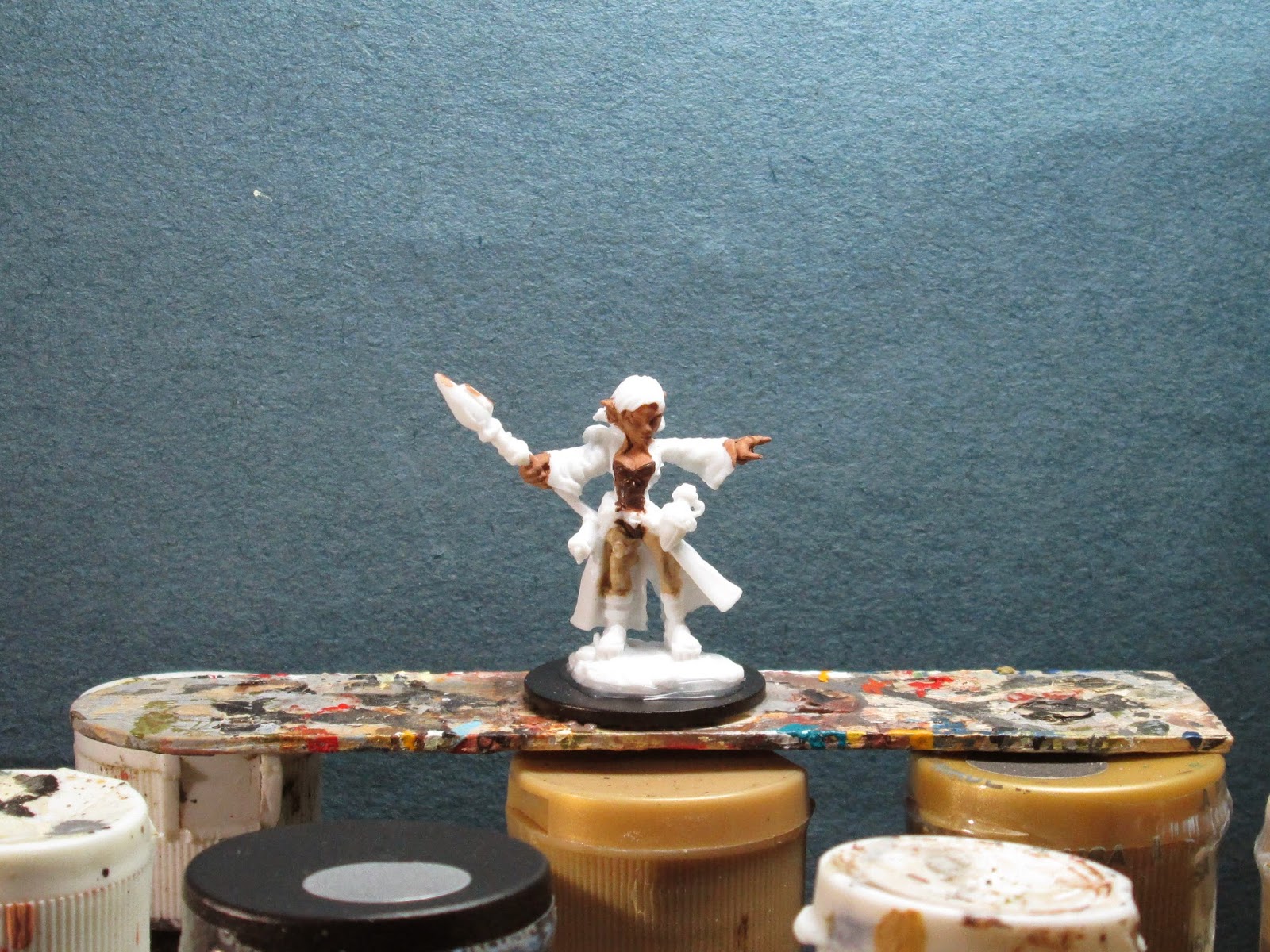 Now I did her coat with Accent "Mustard Seed". I then proceeded to all her belts and straps, painting them DecoArt "Cinnamon Brown".  Her boots I painted Americana "Asphaltum".  Next I worked on the staff, painting that Folk Art "BarnWood".   I followed up then with painting the scroll she carried with Americana "Buttermilk, and the Jug with GW "Terracotta" with a GW "Graveyard Earth" cork.
Next I did the stone in her staff.  I wanted it to be a red gem to add a splash of color to an otherwise drab figure.  While I'm good at painting ornamental rounded gems, I still have a problem with faceted ones.  I started by painting it GW "Blood Red"  I then shaded the thicker parts of the upper facets with  Apple Barrel "Apple Maroon", the lower facets I shaded with Apple Barrel "Yellow". I then added some white highlights on the faces of the upper facets ,and along some of the edges.   I didn't really get the gem look I wanted, but it turned out looking like some kind of cool fire-rock.
I worked now on the metal bits using mainly Cermacoat "14K Gold".  Here again I wanted to spiff up a drab figure, and the Monster Manual had said they liked jewelry,  so I applied gold decorations and trim liberally on the figure. I also used this color for all the buckles and the fittings on her staff.  The scroll caps I painted with Ceramcoat "Bronze" just to add a different metallic tone.
When all I had done so far had a couple hours to dry, I gave the whole figure (except for the fire-rock) a wash with thinned Winsor-Newton "Peat Brown" Ink.  I then went back with some of the base colors and added highlights here and there.
I finished up by painting her hair.  I first painted it all white, then, when that had dried, I did a light wash with some heavily thinned black ink. When this had dried, I then went back over and added some pure white highlights.  Lastly, I painted her eyes white, and added pupils with  Americana "True Blue"
When the figure had overnight to dry, I gave it a coat with Ceramcoat "Matte Varnish"  When this had dried, I flocked the base.  The next day I sprayed it with Testor's "Dullcote" 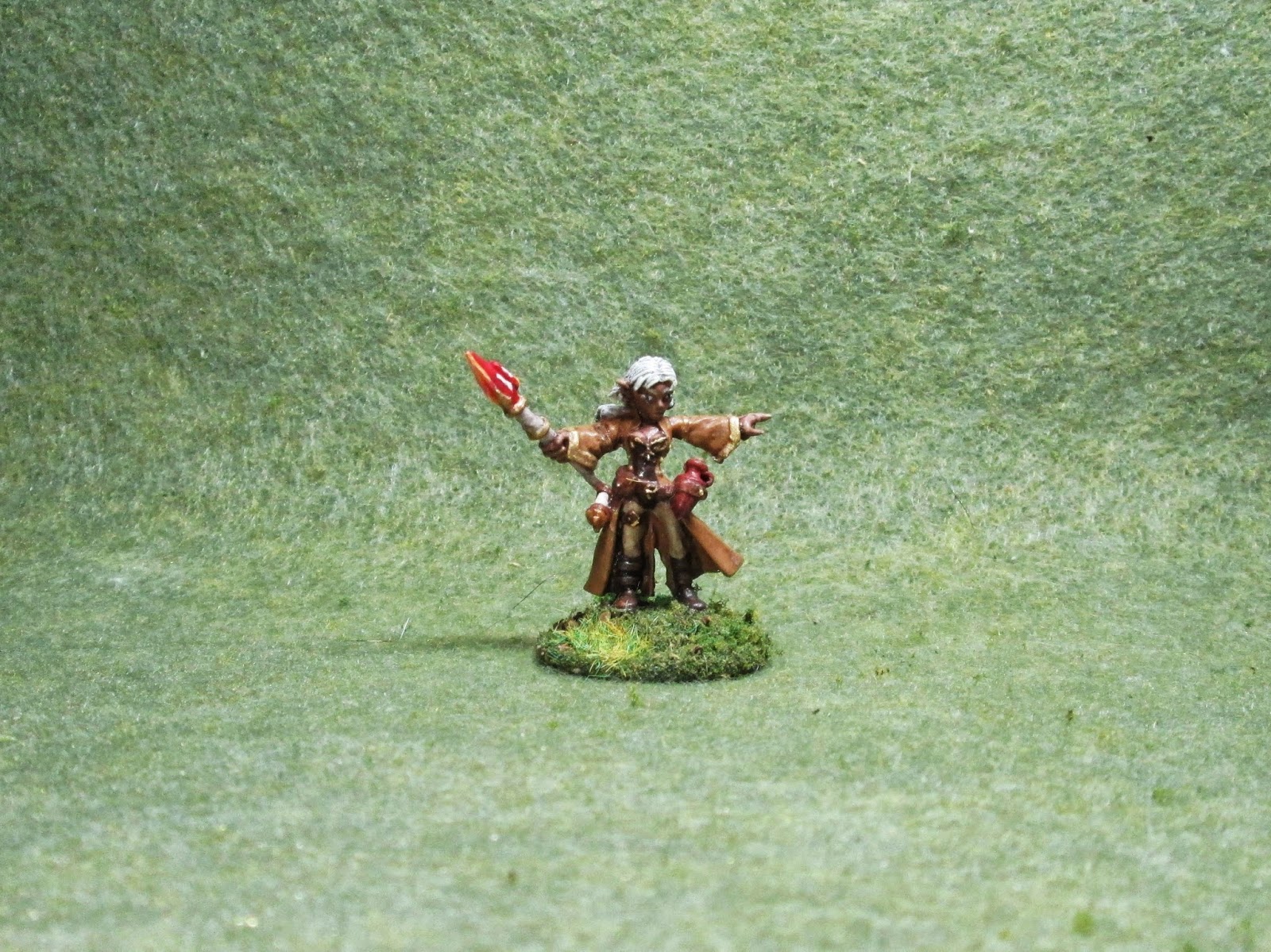 I'm pleased with how this figure turned out.  It was a nice change of pace to paint a Gnome, which I don't think I have ever done before.